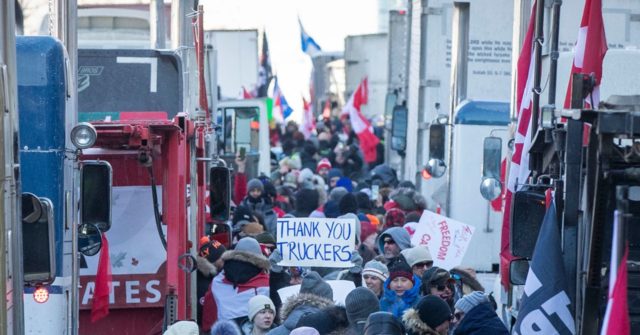 The massed ‘Freedom Convoy 2022’ of Canadian truckers currently stationed around the capital Ottawa is close to raising $10m to support its cause of defeating Prime Minister Justin Trudeau’s “political overreach,” according to the protest GoFundMe page.

The GoFundMe page set up by the organisers clearly shows Tuesday the money pouring in to the cause from across the nation.

The Independent reports this amount is higher than the money raised by major federal political players of Canada during the closing months of 2021, public records with Elections Canada showed.

Canadian Prime Minister Justin Trudeau and his family have reportedly fled their home in Ottawa for “a secret location,” as thousands of truckers traveling in a “freedom convoy” to protest vaccine mandates made their way to its capital city. https://t.co/ZMKF6EEw8z

The New Democratic Party raised $1.8m, which was followed by the Green Party of Canada which raised about $800,000.

However, the “Freedom Convoy 2022” protest has already raised $9,553,300 CAD of its desired $10,000,000 goal, defeating the argument used by detractors that the convoy is somehow made up of outsiders, misfits and those living on the edge of civilised society.

The fundraising page claims it wants freedom from the Trudeau administration coronavirus restrictions which he is “implementing rules and mandates that are destroying the foundation of our businesses, industries and livelihoods”.

A supporter carries a U.S. Confederate flag during the Freedom Convoy protesting Covid-19 vaccine mandates and restrictions in front of Parliament on January 29, 2022 in Ottawa, Canada.( DAVE CHAN/AFP via Getty Images)

A man kneels in solidarity with protestors during a protest of coronavirus vaccine mandates on January 30, 2022 in Ottawa, Canada.  (Photo by Alex Kent/Getty Images)

A woman waves a flag and cheers on truckers in protest of COVID-19 vaccine mandates on January 30, 2022 in Ottawa, Canada. (Alex Kent/Getty Images)

The money raised by the demonstrators will be used to pay for fuel, food and lodgings of the participating trucks.

“We are taking our fight to the doorsteps of our Federal Government and demanding that they cease all mandates against its people,” the GoFundMe page reads.