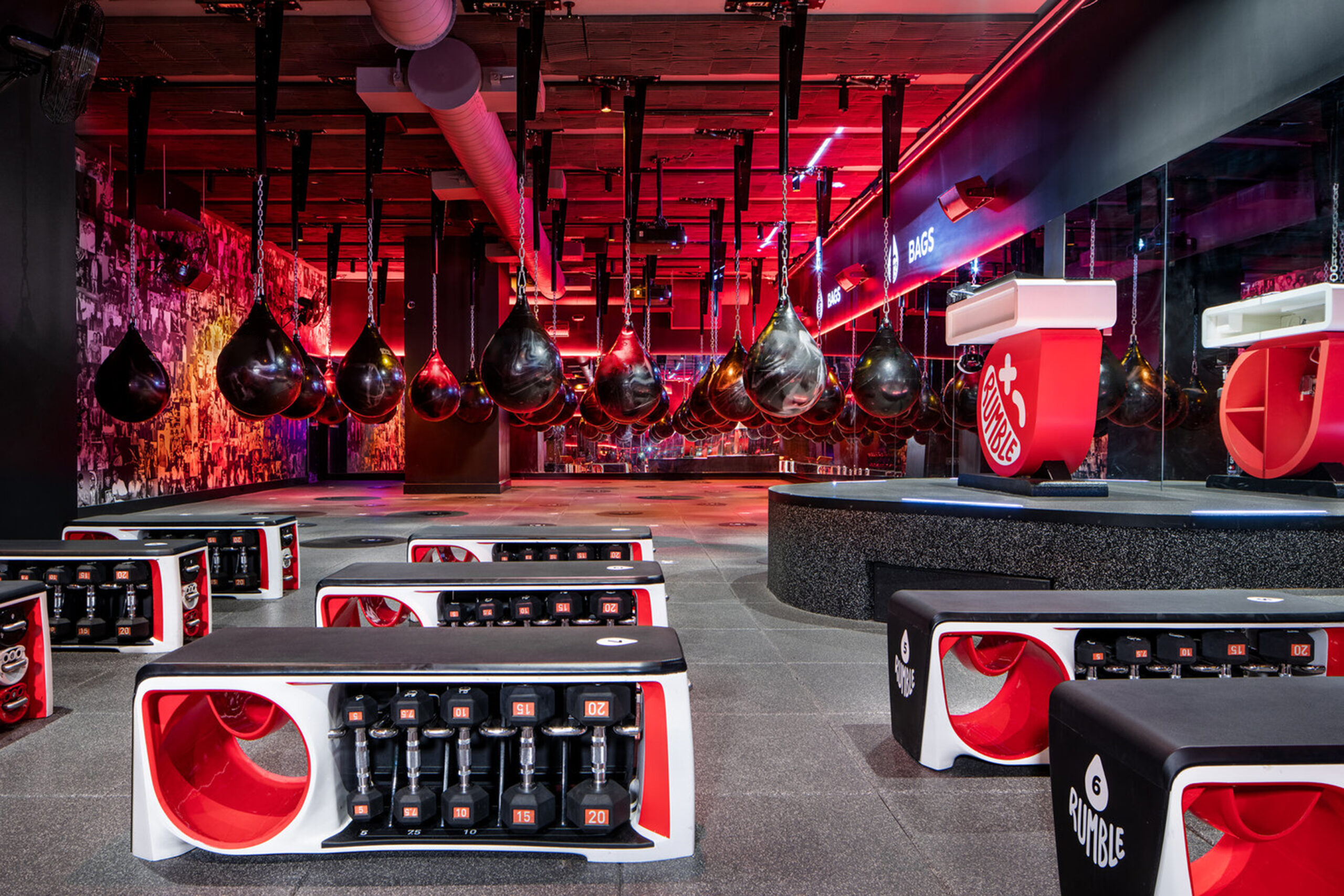 Nate and Karen Nelson knew they wanted to open a franchise. But they didn’t have a concept. They narrowed it down to three choices: a high-end pet store, a Montessori-type preschool, and a boutique boxing gym called Rumble.

The gym intrigued them. They were into fitness—Karen was a former aerobics instructor—but they hadn’t done much boxing. They checked out a few boxing gyms nearby, then headed out to Rumble’s West Hollywood location with their daughter, Allie, for a class.

Unlike traditional boxing gyms, Rumble is more “boxing-inspired,” says its president, Shawn Grove. You never actually swing at anyone in a ring. The 48-person class is divided into two groups. Half the room is working through various boxing combinations on punching bags while the other half is strength- and core-training on benches. The two sides will switch back and forth, “so you’re continuously getting that dual workout through the entire 45-minute class,” Grove says.

Throughout the class, pre-programmed music is blasting, and lights are flashing like a dance club as the instructor leads the groups through 10 5-minute rounds. The energy is palpable from start to finish. The instructor, who stands on a spotlighted podium, is as much an entertainer as a teacher. By the end of their class, the Nelsons were “were exhausted and exhilarated,” says Nate Nelson.

They also found their franchise. “We were like, ‘I think this has some good potential,’” Karen Nelson says. “So, let’s go for it. And here we are.”

The Nelsons’ 3,300-square-foot Rumble Boxing gym is set to open in August at the Gate in Frisco, just north of the Star off the Dallas North Tollway and John Hickman Parkway. It’ll be a family affair. Their daughter, Allie, will run merchandise sales and their banker son, Jake, and his accountant wife, Hayley, will help with finances. “We’re excited for the whole family to be involved with Rumble,” Karen Nelson wrote in a post-interview email.

Rumble Boxing first launched in New York City in 2017. It quickly found a cult following, including many celebrities like Sylvester Stallone and Justin Bieber. In 2021, Xponential Fitness, which owns franchise concepts like Club Pilates, Cyclebar, and Pure Barre, bought Rumble, intending to expand all over the country.

Dallas, says Grove, was always part of the plan. “We’ve always done incredibly well in Dallas. We have some great franchise partners there.” The Nelsons were the first to sign onto Rumble. They have the rights to open three locations. A second location in Frisco, at 4331 Main Street, is in the works for a December opening date. They also hope to open a third Rumble in Plano.

Grove says Xponential plans to have three locations operating in North Texas by the end of the year; a third is set to open in Flower Mound. They plan for several more locations within the city of Dallas proper, but “it’s not like a Starbucks concept, where we’re going to have them on every corner,” Grove says.

Instead, Rumble aims to be a destination spot for its clientele. They focus on customer service, and instructors go through a five-week, “Ritz Carlton”-like training, Nate Nelson says. Pricing varies by location, but it’ll be around $189 a month. (“We are a premium service,” Grove says).

However, despite the price, you can plan for a unique and upscale workout. No boxing experience is required, says Nate Nelson, but you can expect this class to be a knockout.

Get the Living Newsletter

Get the insider’s guide to the best in Dallas style, beauty, and wellness delivered right to your inbox each month.