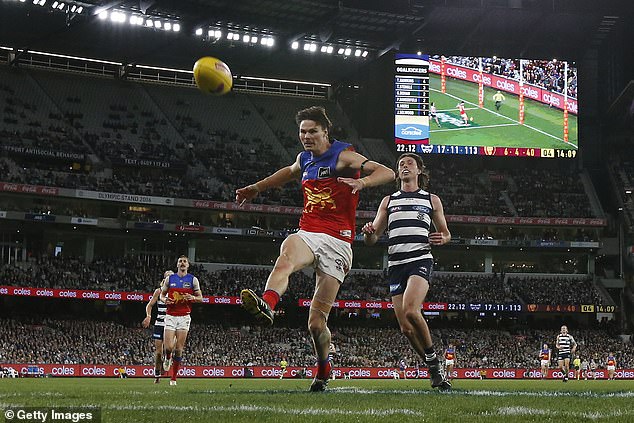 Footy fans have lashed out at the AFL‘s ‘stupid’ decision to blast rock music after every goal that’s been scored at the MCG during this year’s finals series, saying it ruins the atmosphere at the season’s biggest games.

During Friday night’s big win by Geelong over Brisbane fans were blasted with music after each six-pointer and stoppage in play, with the music from the likes of AC/DC and The Killers drowning out the reaction of the crowd.

The MCG is known for its insane atmosphere, especially throughout finals footy, which attracts some of the biggest crowds in Australian sport.

Fans vented their anger at the AFL after the game, saying the noise took the gloss off the preliminary final.

‘The natural sounds of experiencing a football match have all but been destroyed by the incessant noise and lightshow after ever goal. It has to stop. The beauty of watching Aussie Rules included the roar of a crowd, the conversation with friend and foe beside you,’ a Richmond supporter wrote.

Nobody, not once, in the history of the game:

The @AFL: “Let’s play stupid music after every goal so you can’t hear the crowd!” #AFLCatsLions

Andrew Mueller wrote: ‘Nobody. Nobody at all. Nobody, not once, in the history of the game: The @AFL: ‘Let’s play stupid music after every goal so you can’t hear the crowd!’

‘I’ve been coming to the footy my whole life. The MCG does not need to play ACDC ‘you shook me all night long’ after a goal in A PRELIMINARY FINAL It’s a first world problem but I’m in the outer & it is horrendous in every way possible #aflcatslons,’ Age journalist Peter Ryan tweeted.

Cheryl Critchley wrote: ‘Why would you drown out the unique sight and sound of #AFL fans in full flight after a goal?’

Fans continued to urged the AFL to stop playing the music, pointing out the noise of the crowd is a huge part of what makes finals footy at the MCG so breathtaking.

Blaring music after a goal 🤮

Tigers fans stack the seats at the MCG during the 2019 grand final, which was the last time a big dance was played at the iconic Melbourne Stadium

The Cats thumping win puts them into their 19th grand final birth, where they will face off against Sydney or Collingwood.

20-year-old gun Max Holmes went down in the third quarter with a suspected hamstring tear, visibly emotional on the sidelines as it will most likely rule him out of the premiership match.

Tom Hawkins put in a cracking performance with the boot, kicking four goals and three behinds.

The MCG lights up purple in memory of the Queen – the Stadium blasted music at every possible break on Friday night, leaving fans frustrated as it took away from the finals atmosphere

The MCG was under fire earlier this year in March, where fans cried out about the shocking PA system which erratically blared music, while staff shortages meant wait lines for food stretched near 50 metres.