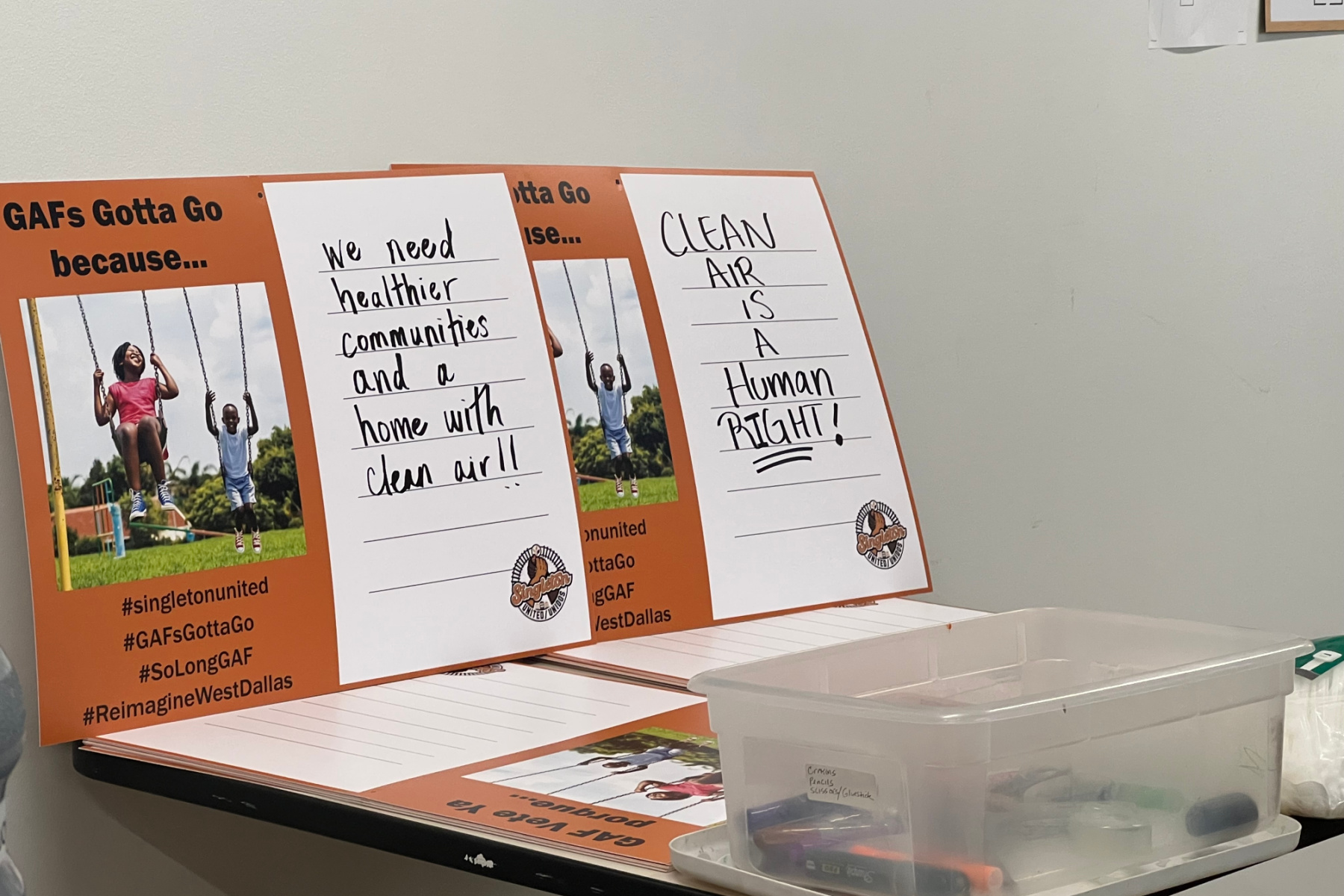 The GAF shingle plant has operated on Singleton Boulevard since 1946, which means generations of West Dallas families have never lived a day without it as a neighbor. But GAF appears ready to leave amid complaints from the neighborhood that allege the plant’s emissions are harming their quality of life. How soon that departure happens depends on negotiations that started this week.

Last month, the company indicated that it might be open to leaving the neighborhood, and a meeting was set to discuss potential terms.

On Wednesday night, GAF gathered a group of representatives that included some of its C-suite, Masterplan Senior Advisor (and former Dallas city councilman) Lee Kleinman, and public relations firm Allyn Media’s Shawn Williams. They sat down with Dallas Deputy Mayor Pro Tem Omar Narvaez, who represents the district; city staffers; and community members, including representatives from the neighborhood groups West Dallas 1 and Singleton United/Unidos. It was the first time all the parties had been present for a discussion.

After the meeting, the company issued a statement, saying that they came to “share a responsible and considered plan to pursue a legally-binding winding down of operations in West Dallas over the next 7 years.” The statement added that GAF hoped to continue down a “collaborative path” with the city and the plant’s neighbors.

In a press conference Thursday afternoon, Narvaez said that GAF came forward “willingly” to work on plans for their exit, agreeing to “what I would call self-amortization.” Amortization is a mechanism by which the city can qualify a business as a “non-conforming use” and begin the process to evict it from a community.

“What GAF said is that they have heard the community loud and clear and that they recognize that as West Dallas is changing and becoming more residential, that this industrial use just no longer fits in West Dallas,” said Narvaez.

Narvaez said that the meeting was one in what will be one of many, and the discussion was preliminary in nature. He repeatedly said there had been no firm timeline set for GAF’s departure.

At least three individuals at the meeting confirmed that while GAF did say it would take seven years to wind down, there at least seemed to be some sense that this was a starting point, not a firm timeline.

In May, Singleton United/Unidos released a report called the “Case for City Amortization of GAF,” arguing that the 76-year-old shingle factory should vacate the neighborhood because it adversely impacts the quality of life and health of nearby residents.

In 2020, about two years before the report was released, members of West Dallas 1, a collective of neighborhood associations and community groups, began monitoring the air quality in the neighborhood. They spearheaded a demand for a hearing with the Texas Commission on Environmental Quality (TCEQ) to challenge GAF’s permit renewal.

While the permit was renewed, the community made enough comments during the process to give the permit more “teeth,” including a requirement to increase the frequency of monitoring from quarterly to weekly. Both Kathryn Bazan, the city’s Environmental Commission chair, and Janie Cisneros, spokesperson for Singleton United/Unidos, agreed that the updated permit added new oversight.

“They did community engagement,” Bazan said. “The permit had never been challenged before.”

“Yes, the permit does have more teeth now,” Cisneros agreed.

But even with the additional regulations, the residents seem ready for the plant to go sooner than later and are working to develop a counter offer. Narvaez said he will use “every tool” at his disposal and would not take a city-led amortization off the table. The community members at the meeting asked GAF for more details about their timeline, and the company agreed to provide that within seven to 10 days.

“While West Dallas 1 appreciates that GAF Materials has come to the discussion table, our community has not come to any agreement about the method or timeline for the facility’s closure,” West Dallas 1 president Raul Reyes said. “Our priority has been and continues to be the safety of our residents, which cannot be assured while GAF continues to produce harmful emissions in West Dallas.”

He said that the only agreement so far is to continue transparent conversations about an exit strategy–whether that be on GAF’s own steam or by amortization.

“The good news is that all parties are in agreement that GAF Materials is leaving West Dallas,” Bazan said, adding that the community will continue to collaborate with Narvaez and the city to determine the next steps. “Reducing the facility’s significant emissions between now and its closure, ensuring the site’s remediation, and eliminating the potential for future industrial land uses are all factors to be considered.”

Cisneros said that once GAF provides its answers, the community will review them and compare potential timelines for amortization with whatever the company proposes. She anticipates having community meetings to go over the options so as many people as possible can weigh in.

“At this point, it’s a matter of getting information and making those comparisons,” she said. “In this meeting, there was nothing set in stone–this was the beginning of those conversations, but having more information so we can weigh the pros and cons is important. I’m still cautiously optimistic. It’s good that we’re working together towards this, and I’m happy that these options are in front of us.”

If the community decides that seven years is too long, and they’d like to pursue amortization, residents would need to prove to the city that the factory is a threat to their health and runs contrary to the appropriate zoning for that area. Having Narvaez’s support will be key in that process. The City Council would then request that a panel from the Board of Adjustments—which is made up of Dallas residents appointed by their council member—review the matter, and that panel would then decide for or against amortization.

If either side is unhappy with the outcome of that, it would be appealed to the district court. To sum up: the matter has a long way to go before the plant stops its operations.