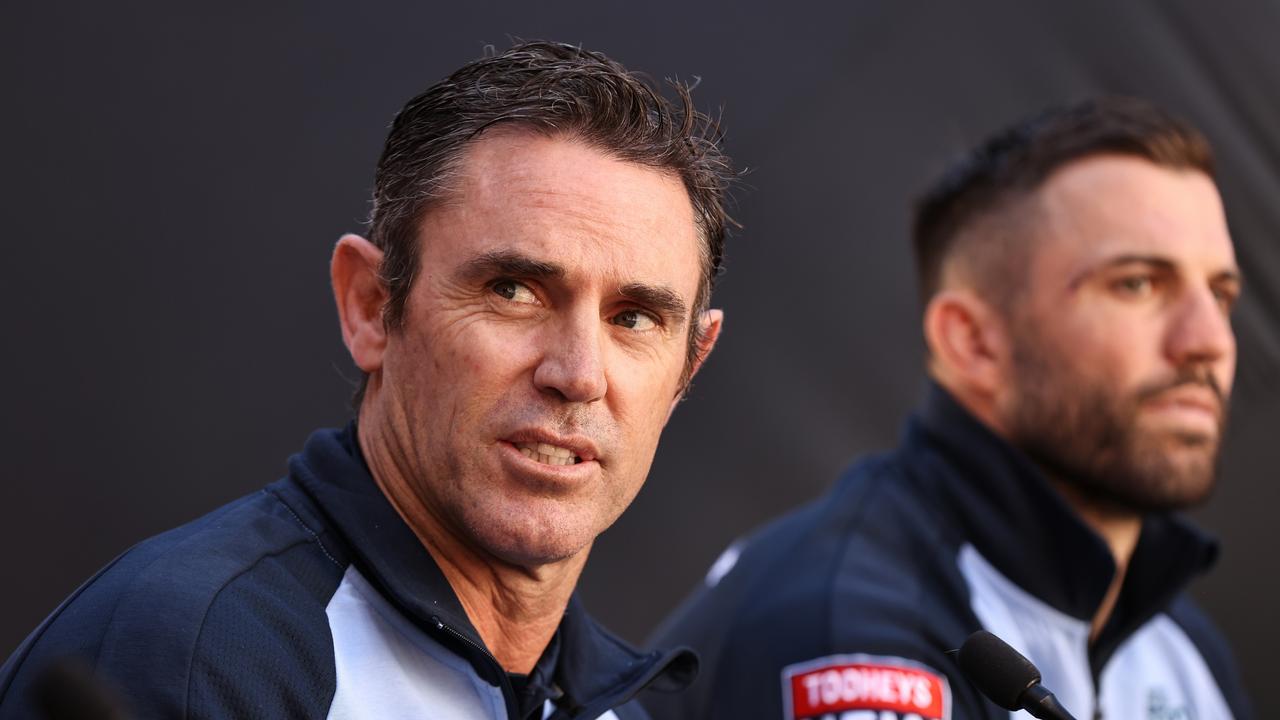 New South Wales are ahead 38-12 after 73 minutes after a controversial sin bin on the stroke of half-time left Queensland players exhausted.

The Maroons scored the opening try thanks to a beautiful pass from Kalyn Ponga that left the Blues outside backs fuming.

Maroons enforcer Felise Kaufusi scored the first try in the 22nd minute but the Blues struck back moments later through debutant Matt Burton.

Queensland regained the lead on the half-hour mark thanks to another Ponga pass which led to a Cameron Munster try.

Kaufusi was binned in the 39th minute for slowing down the ruck on his own line and the Blues made him pay with Brian To’o scoring on the next play.

Daniel Tupou scored the first try of the second before halves Jarome Hughes and Cleary went to town with three tres in a 10-minute blitz.

Nathan Cleary scores two tries in two minutes to take his personal tally for the night to 22 points.

The Maroons are completely gassed and we’ve almost got an identical scoreline to Game II in Perth in 2019.

“They’ve come with a new energy tonight. It’s been all the Blues,” Cameron Smith said.

The fatigue is starting to tell for the Queenslanders with Jarome Luai dancing through to score from 20 metres out.

“That marker play from Gagai, he just relaxed for a fraction of a second and the gap opens up. Jarome Luai creates something out of nothing,” Andrew Johns said.

“You can’t tell fatigue from home but these guys are absolutely out on their feet.”

The Blues looked certain to earn a repeat set before a magical piece of play from Cameron Munster.

Munster scooped the ball centimetres off the ground and in one motion passed to Kurt Capewell who escaped the in-goal.

“Cameron Munster, that was special,” Matt Thompson said in commentary.

“There’s only one bloke in the ground who would have even considered doing that,” Andrew Johns responded.

But the Blues marched back down field on their next set and a cut-out pass from Nathan Cleary saw Daniel Tupou score out wide.

“It had to come, so much field position and being under the pump with Kaufusi in the bin,” Johns said.

The Blues were pressuring Queensland’s line when Stephen Crichton threw a forward pass out of dummy half to halt all momentum.

The Maroons are still playing with a man down but their scramble defence has been terrific.

“They’re working so well together in defence,” Andrew Johns said.

Queensland enforcer Felise Kaufusi is controversially binned for slowing down the ruck on his own goal line.

“This is massive. Repeated infringements and Felise Kaufusi will head to the sin bin here,”

DCE argued the infringements were different but Ashley Klein said it’s unacceptable to lay all over the ball.

NSW wasted no time making the most of the man advantage with Brian To’o on the end of an overlap and scoring in the corner.

“I’m disappointed with the sin bin, let’s hope it doesn’t decide the game. I hate sin bins at the best of times, let alone in Origin,” Phil Gould said at half-time.

Kalyn Ponga scoots across the field and throws a dummy which sees him break down the left wing before finding Valentine Holmes back on the inside.

Nathan Cleary puts through a deft grubber off the side of his boot which caught Kalyn Ponga off guard and Matt Burton swooped through to score.

“That was great from Matt Burton to know that kick was coming by reading the play from Cleary,” Cameron Smith said.

The Maroons have scored the opening try thanks to a sensational short ball from Kalyn Ponga to Felise Kaufusi who barged past fullback James Tedesco to score.

“The NSW outside backs are blowing up about the pass but that was an absolutely beautiful pass,” Andrew Johns said.

“He’s got great ability, he can move quickly across field and can keep his hands nice and soft, which equates to nice short passes.

“It’s a great trait to have – quick with the feet and soft with the hands.”

Daly Cherry-Evans put a grubber into the in-goal which was left by the Blues defenders and bounced up for Selwyn Cobbo but he couldn’t react in time to plant it down.

“It surprised him. I don’t know what Brian To’o was doing there,” Andrew Johns said.

James Tedesco successfully challenged Liam Martin being stripped by Felise Kaufusi and moments later the Maroons were penalised again for a strip.

Nathan Cleary steps up and slots the gift two points for a 2-0 lead after 12 minutes.

The Maroons had their first after the Blues were pinged for an obstruction and Cameron Munster set up Selwyn Cobbo who flew for the corner but he was well defended by Brian To’o.

NSW had the first attacking opportunity after Nathan Cleary charged down a Cameron Munster kick but they couldn’t turn the field position into points.

A loose pass ended up bouncing over the touch line on Brian To’o’s wing.

The “New South Wales” chant went up in Perth inside the first 60 seconds but it’s been a ferocious start from the Maroons.

Multiple Blues forwards were crunched on their opening set, with Maroons enforcer Josh Papalii smashing Payne Haas on his first touch of the ball.