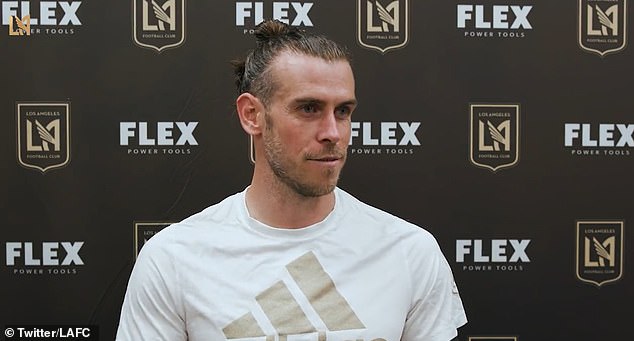 By Adam Shergold for MailOnline

Gareth Bale has made his debut for Major League Soccer side Los Angeles FC – and his first involvement in their colours was certainly eye-catching.

The Welsh star, who left Real Madrid earlier in the summer to move Stateside, produced a backheel flick with one of his first touches after being brought on.

Bale, 33, was introduced with 18 minutes of LAFC’s 2-1 victory over Nashville at Geodis Park and sprung one of his team-mates into space with the elegant flick.

The win kept LAFC top of the MLS Western Conference, a point clear of Austin with a game in hand, as they bid to reach the Play-offs.

Veteran Italian defender Giorgio Chiellini also made his first appearance for the club.

‘It felt amazing. I was itching from the first half. As soon as I was on the bench, I wanted to get off, help the team and play some minutes,’ Bale said.

‘It’s important for me individually that I get my fitness going because it’s obviously the end of the season in Europe. So it’s good to get some minutes. We got the three points, so we’re happy.

‘I’m excited to get the season going for myself and help the team as much as possible.’

At his unveiling last week, Bale dismissed claims he’d crossed the Atlantic to join a ‘retirement league’ having been linked with hometown club Cardiff City in the Championship.

Bale signed a one-year contract with LAFC – with the option to extend that to 18 months – as he tries to keep up his form ahead of the World Cup with Wales in November.

‘This is a league that has come a long way in last 10 years,’ he said.

‘I don’t think anyone sees it as a retirement league anymore. The weather is difficult, the travel is difficult.

‘The standard here is increasing. It’s a lot better than people in Europe think. Everything is improving – it’s a league on the rise.’

‘I want to make my mark on the league. It’s not a short-term thing. It gives me an opportunity to keep going to the next Euros – maybe further.

‘Being here gives me the best chance to make it to Euros and you never know, maybe one more.’

LAFC are next in action away to Sporting Kansas City next Sunday.