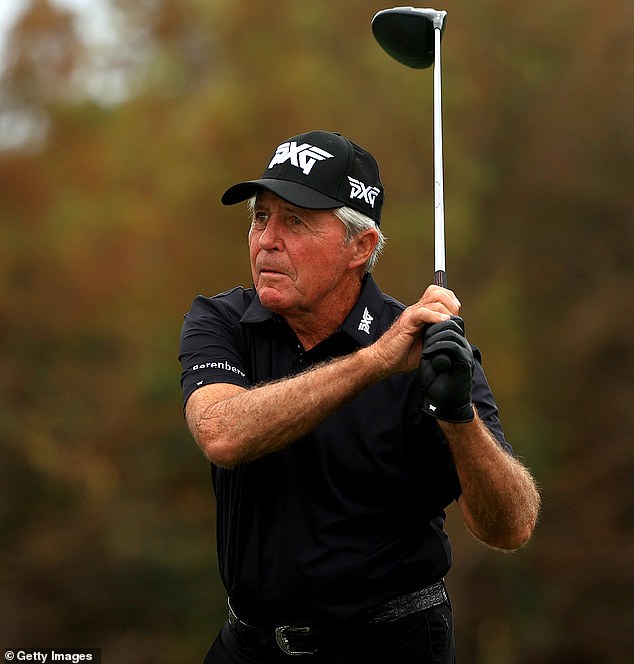 Golf legend Gary Player says LIV Golf rebels ‘don’t have confidence they can win’ as he asks them ‘how can you be a champion playing on a tour with 54 holes and no cut?’… and SLAMS Cam Smith for leaving PGA Tour

By Jake Fenner For Dailymail.Com

In what could be considered a bit of friendly fire, Gary Player – a golf Saudi ambassador – targeted Australian golfer Cameron Smith, who recently joined the LIV tour.

Smith is set to tee off in his first event with the tour this weekend in a tournament outside of Boston.

Player, a nine-time major winner widely considered to be one of the best golfers of all time, spoke to the BBC in an interview criticizing the legitimacy of the tour and questioning Smith’s decision making.

‘I wouldn’t take a billion dollars for my nine majors on both [the PGA and Senior] tours,’ Player told the interviewer. ‘The only man to win the Grand Slam on both tours. I worked hard. I had desire. I travelled the world. It was an education, I met wonderful people.

‘How can you ever be a champion playing a tour with 54 holes and no cut? What sort of tour is that? 54 holes, no cut, a team event nobody understands.

‘It’s a tour for people who don’t have confidence in their future. They don’t have the confidence they can be winners. It’s never going to compare to the regular tour. No chance. They’ve declared war on the PGA Tour.’

Player then turned his attention to Smith, the no. 2 ranked player in the world who won this year’s Open Championship.

‘I was absolutely shocked to hear (about) Cameron Smith. Here’s a young man I really thought was going to be a superstar. Now what sort of future does he have? Will he be allowed to play in Majors in the future? Will he be able to realize this great dream of being a champion? I don’t know.’

‘I don’t blame [major winner Henrik] Stenson for going. He had no money, so he had to go. But this is a potential superstar. I think his advisors have given him the wrong advice.’

Player added that he doesn’t blame most of the players for going on the tour.

‘If you are going to join the LIV Tour, don’t make big fuss about it! Everybody’s making such a big fuss! Let them go! If they want to go, they’re going.

‘But the PGA Tour is still the tour of the world. This is where you can realize and fulfill your dreams, and be a champion. You’re not going to stop them from going, and you don’t have to worry about them going either.

‘Because there’s so many wonderful young guys to (fill) the vacuum – you’ve still got Tiger Woods, you’ve got Rory McIlroy. You’ve got Jon Rahm. You’ve got dozens of wonderful players on the regular tour. What is all the fuss about? Let them go.’