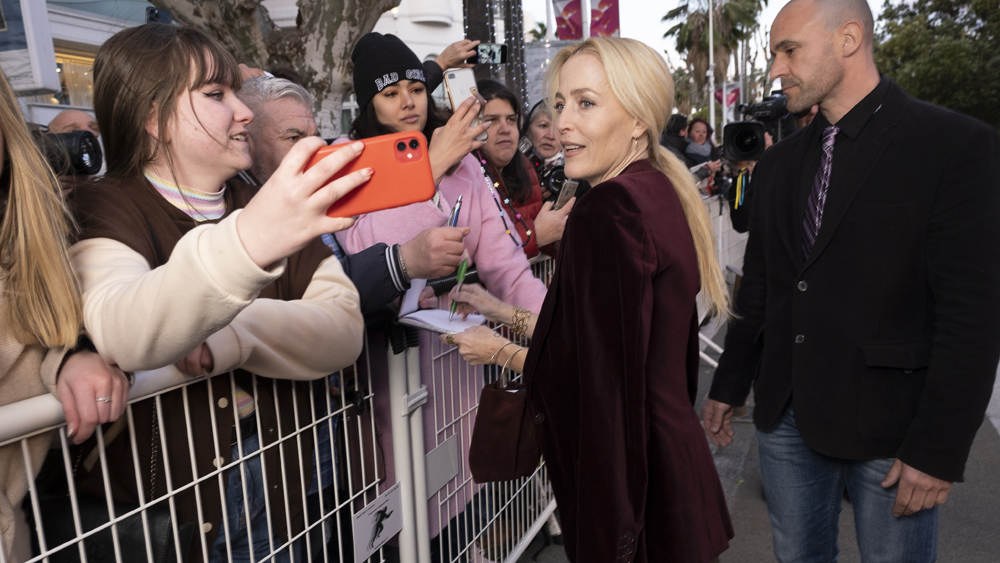 Gillian Anderson, speaking at a masterclass at the Canneseries TV festival on France’s Côte d’Azur Saturday, teased that she is developing “something else” based on the life of a historical figure, following her roles as Margaret Thatcher in “The Crown” and Eleanor Roosevelt in upcoming series “The First Lady.” No further details were forthcoming from the actor, who recently signed a producing deal with Netflix.

Speaking about receiving recognition for her career achievements, such as the Variety Icon Award she accepted Friday in Cannes, she said it felt “kind of surreal actually,” adding, “it kind of feels like it is happening to somebody else.”

Asked by French journalist Nora Bouazzouni, who was the onstage interviewer, whether she had realized that her role as Dana Scully in “The X-Files” would change the face of female leads on television when she first read the script, Anderson responded: “Oh God, no.” She saw it just as a job, and “figured it might be a year’s worth of work.”

Anderson concurred with Bouazzouni’s assertion that Scully was a “badass” – “confident” and “no push over” – and that had set the tone for her whole career. “I think that the badass-ness pre-existed in me […] and she brought that out in me. The nature of badass has a bit of rebelliousness in it, and I had pushed that to its limits prior to Scully. But I am definitely drawn to badass women.”

She acknowledged that there was a “stigma” attached to television at that time, and said of her decision to take the role: “It was a naive and very innocent entrance into TV. I had not wanted to do TV, and television – for women in particular – at the time was not something to aspire to.”

However, she added, “I really lucked into this first foray into television with this extraordinary character.”

Discussing her role on stage as Blanche DuBois in director Benedict Andrews’ staging of Tennessee Williams’ “A Streetcar Named Desire” in 2014, she said: “I had such an extraordinary experience working on that production.” Adding that, “once you do Williams it lives inside of you – in your soul somewhere.” She said she had lost herself in the role, “to the point where I wasn’t sure whether I’d be able to come out the other side.” Andrews had said that the tension of the performance should be like there was a shark circling beneath the characters.

Acting on stage felt “terrifying.” “There is something about the danger of it that appeals to me, while at the time it repulses me,” she said. “And there’s nothing like theater in terms of the interchange between the audience and the actor. Every night is completely different.”

Moving onto her role as Stella Gibson in “The Fall,” she said that the character was also a “badass.” She said that such role models had not been present in popular cultural when she had been growing up. “She felt so unique when I read her on the page. I felt she needed to be in the atmosphere. She needed to be released into the world. Almost like a companion for women. Just knowing that someone like that could exist.”

Discussing her choice of roles, she said that her characters “all seemed to be single-minded, determined workaholics.” One example was Margaret Thatcher in “The Crown.” She said that she was “terrified” to play that part, because “people know her so well. She is in the consciousness of many of us […] and people have very strong feelings about her.”

Anderson said that when approaching a role “there is no guarantee it is going to work,” but the actor just has to throw themselves into the performance. She added: “Fortunately I don’t think I took her home with me.”

As with Thatcher, she had studied the “vocal gestures” of Eleanor Roosevelt for her role in “The First Lady,” and that helped her get into character. She teased that she was developing “something else” with another historical figure at the center, and then she will be “done” with historical figures.

Moving onto the role of sex therapist Jean Milburn in “Sex Education,” she said “that’s more me than any of the other characters,” adding “that’s not entirely true.” She said: “I have so much fun doing it. We are properly allowed to play and push things as far as we want, so it has felt quite liberating. I love how inappropriate she is, and morally ambiguous.” She credited Milburn for “normalizing female sexuality,” and noted that her podcast on Curio, “What Do I Know?!,” had a couple of pieces devoted to the subject of sex among older people.