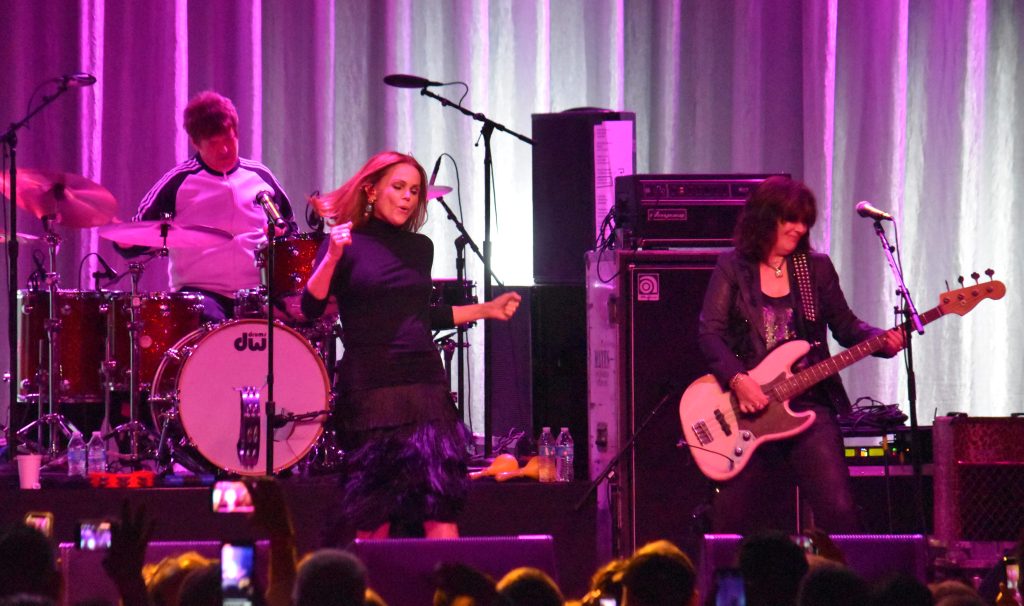 With the Go-Go’s now finally inducted into the Rock and Roll Hall of Fame last year — about 15 years after it should have happened — are there any other major injustices in the world left to correct? Headlines say yes, actually, but still, it was easy to focus on tiny moral conquests that have been achieved as the group returned to Southern California for a series of homecoming shows this week. It’s a victory lap that isn’t leaving any skid marks on any hearts.

The big kahuna of their SoCal tour-within-a-tour this week is Wednesday night’s show at Crypto.com Arena, a venue that’s seven miles and about 43 years from the Masque, where the earliest incarnation of the group started out as a punk group. Not even a “pop-punk” band, to cite the modern lingo, but something close to just having the single P, before they quickly realized they could write hooks and play slower than 180 bpm.

Monday night at the House of Blues in Anaheim, they did a far smaller-scale show that probably counts as an underplay — and definitely counts as the closest anyone will come in a commercial, ticketed setting to seeing the band recreate its clubby origins. Clearly Orange County has a different set of standards for how many music fans can be reasonably packed into a room of that size than the neighboring county to the north, but however difficult the task of penetrating the nearly impregnable main room was (some fans gave up and watched on monitors in the lobby), it did feel like sweaty olde Hollywood, minus the smoke. It won’t be the same at Crypto with pregnable seating and an HVAC system.

In Anaheim, right on the dot at 8 — bedtimes being something that have definitely changed since Masque days — Blondie’s “Rip Her to Shreds” served as vintage entrance music for the group, and that song’s arguably weird take on feminism might have been apropos regardless. But it also served as an acknowledgement that Blondie’s drummer Clem Burke is sitting in on at least some of these dates; Gina Schock is said to be out with some hand issues. The sight of four of five of the classic membership accompanied by Burke might’ve made you wonder why band lineups with just one dude never caught on, but then again, neither did “all-girl” groups, despite the Go-Go’s’ pioneering, multiplatinum ways. (Please reignite things, Linda Lindas.)

But it doesn’t matter if the group inspired tens of millions of women to pick up guitars or just hundreds of thousands. The Go-Go’s would still be one of the most wonderful surviving remnants of the early ’80s if they’d never influenced another female soul or been singled out as a novelty. Their short but undeniable song catalog speaks for itself… and sang for itself when so much of it got adapted for the Broadway musical “Head Over Heels.” Caffey & Valentine & Wiedlin as Rodgers & Hart & Hammerstein? That’s a weird thing that happened in the last few years, and Kathy Valentine didn’t even mention their indirect appropriation as musical-comedy songwriters when she offered a short list between numbers of fresh developments in the last few years — the Hall of Fame induction, the documentary (Showtime’s “The Go-Go’s”), the lone new song (“Club Zero”). Maybe the musical was too uncool or too short-lived to mention, but it was pretty good, and pointed up just how many terrific songs they came up with in one insanely short but fertile go at album-making in 1981-84 .

But it wasn’t the sheer songcraft that old fans and some young ones were heading to House of Blues for; it was the beat, and the vibe, and the promise that maybe, if these five (or temporarily four) women prove to still have their mojo, maybe I can reclaim mine, too? And the nearly 90-minute set did not disappoint on either the personality or energy fronts. It’s still as possible as ever, for both female fans and male, to play the game of “Who’s your favorite Beatle… er, Go-Go?”

Sometimes hunched over a keyboard and sometimes anchoring stage-left on lead guitar, Charlotte Caffey remains the most scientific-seeming presence on stage. Jane Wiedlin is the most truly punky one, now as then: Going grey is as bold a color choice as any Masque-er could have picked back in the day, and dressing up as a cleric, complete with white collar and chest cross, reinforced her native irreverence. And it was some of Wiedlin’s rhythm guitar squalls that maybe most of all made it seem like they were getting back to 1979, even more than 1982 forward. Kathy Valentine has always just felt like a pure, timeless rocker who’d be at home with any group, though it’s to our benefit that it’s the Go-Go’s that were graced with that classic “Head Over Heels” bass line. And Belinda Carlisle? At some point between “Beauty and the Beat” and her solo debut, she transformed from winningly cherubic into a more chill version of Ann-Margret, with a voice and a hippy-hippy-shake that have weathered the years in a way that makes a great advertisement for Pilates and vegetarianism (and, sure, quitting cocaine).

To put a measure on it: maybe 5% less demonstrative than in the salad days, because girls will be women, but just as engaging, and seemingly engaged. It may require having Schock back to feel the full effect of how they’ve stopped the world, as it were. (And it’s ironic that at a time when all five members are on the same page, after a bunch of tours where someone or another had bowed out, a health issue is keeping that from quite happening at the moment.) That a band can still have all its original parts and still be this inspirational more than 40 years past the No. 1… it’s surely something none of them take for granted, and probably neither did the House of Blues crowd, although the prospect of passing out may have meant saving philosophizing for the long parking-garage logjam.

As “We Got the Beat” kicked in prior to the encore, Wiedlin called it “the song you came to hear” in the process of imploring the crowd to put phones down and relish the moment. Maybe she’s not completely off-base about that — even as the co-author of another song-everyone-obviously-came-to-hear, “Our Lips Are Sealed” — but it’d be nice to think she was underestimating the depth of the audience’s catalog knowledge. The setlist was certainly built like there was faith in an audience not just the hits… although having so many songs that max out at three minutes played at the original tempos in an 85-minute set does require curating some album tracks, regardless. These shows provide a nice chance to meet or get reacquainted with some songs from their semi-comeback album, 2001’s “God Bless the Go-Go’s,” like “Automatic Rainy Day” (which was nicely used in the Broadway show, too, despite its relative obscurity), “Unforgiven” and the shapeliness-celebrating “Throw Me a Curve,” which had Carlisle striking ironic pin-up poses.

Is it too much to expect a fresh album? Probably, although if their contemporaries in X can finally abandon the idea of an original early ’80s catalog being frozen in time forever, it shouldn’t seem impossible here. As Valentine said, there was the one new song to celebrate here — “Club Zero,” recorded to put a relevant cap on the Showtime doc — and the way its angrier feminist tone fit into the set Monday would seem to offer a path forward for the group that isn’t completely a capitulation to what worked 40 years ago. But if the Go-Go’s go on as a kind of rock Brigadoon, re-arising every few years to resurrect a selection of these same songs, there are worse places to take a mental vacation than the era when it seemed like L.A. “girls” really would run the world.

Following the Crypto.com show, the Go-Go’s make one last Southern California stop, at Humphreys Concerts by the Bay in San Diego, before heading to Europe as guests on Billy Idol’s tour of the U.K. in June.