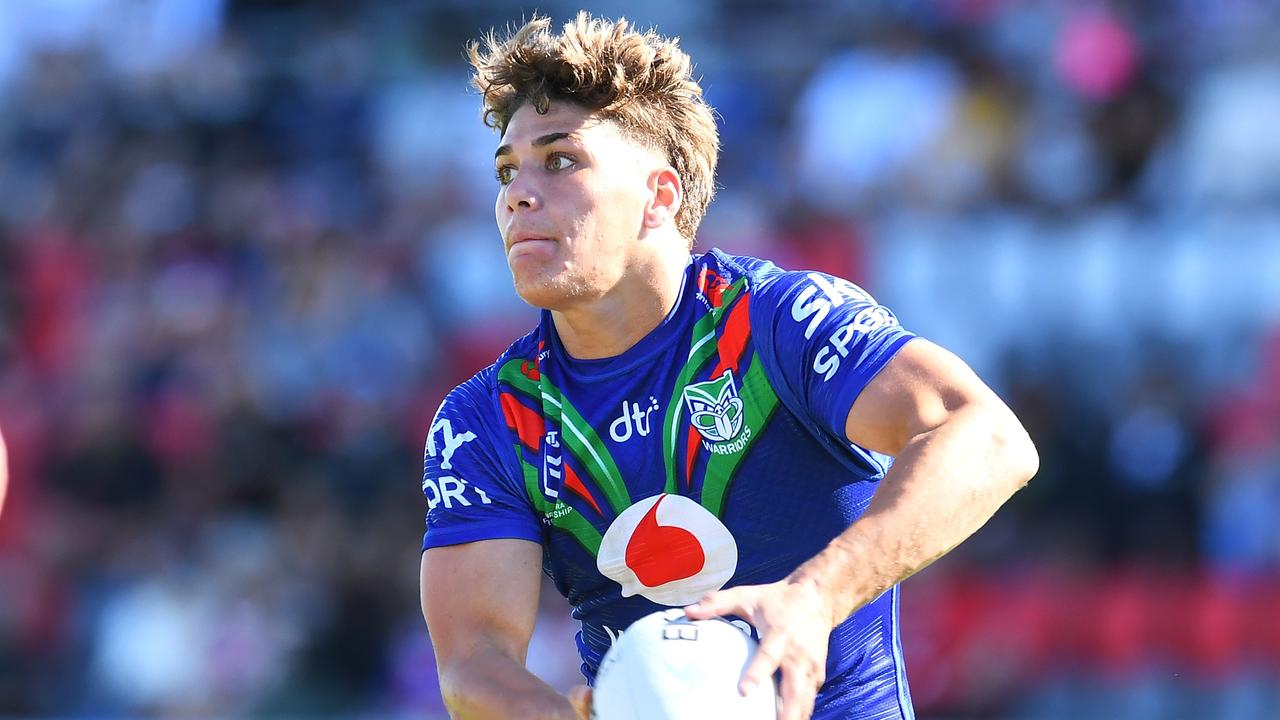 The Warriors have been left fuming after a controversial call from the Bunker in their clash with the Titans on the Gold Coast.

Playmaker Chanel Harris-Tavita appeared to have scored close to the posts only for the Bunker to rule he had lost the ball.

The Warriors star had multiple attempts to ground the ball before a desperate Titans skipper Tino Fa’asuamaleaui reached in to strip it in the in-goal to stop the try.

“They are making it hard to score tries these days Vossy, I feel that he still had control of the ball even though his hand came off it,” Flanagan said.

The Warriors bounced back on the stroke of halftime, however, after bizarre sequence of play to lead 18-16.

Titans winger Phillip Sami was initially believed to have grounded the Warriors’ grubber in goal, but further review showed he never picked up the ball cleanly.

Warriors winger Adam Pompey then attempted to ground the ball, although his put-down wasn’t exactly clean according to Fox League’s Andrew Voss and Shane Flanagan.

“They have come up with the most bizarre try-scoring action there from Pompey,” Flanagan said.

“I think the put-down from Pompey is questionable, he has pushed it against his own player.. has he got control, I think the Titans should be saying can you review the review because have you really reviewed the actual put-down,” Voss said.

Earlier, AJ Brimson got the Titans off to the perfect star when set up the opening try of the game with his very first touch.

The 23-year-old, who missed Round 1 with injury, stepped off his right foot, slicing through the Warriors defence and beating Reece Walsh at fullback with a simple draw and pass to Beau Fermor.

“That is a truly stunning start to the game from this super player AJ Brimson,” Andrew Voss said on Fox League’s coverage.

Former NRL great Willie Mason then called out the Titans use of superstar David Fifita in an explosive social medial post.

“What a waste of talent putting David Fifita at right side back row. SMH. Expect fuck all ball and a lot of kick chase from him,” Mason wrote.

It was an eventful half for Fifita who was placed on report for a high shot before delivering a pinpoint cut-out ball to winger Greg Marzhew to score his second of the night.

After Shaun Johnson’s exclusion only one game into his second stint at the Warriors, coach Nathan Brown has admitted they never expected him to play a full season.

Ash Taylor, the former Titans million-dollar man was signed alongside Johnson and Brown explained why the New Zealand club drafted the playmaker into their squad.

“We sort of always bought Ash so that if, we didn’t expect Shaun to play 25 games when we signed him, we brought Ash in so that we had an experienced bloke who kicks the ball reasonably well and knows his way around the field,” Brown said on Fox League’s coverage.

“Rather than play a younger player who wasn’t quite ready, and in Chanel, Chanel is a player we all have a good hope for in the future.”

After narrowly losing to the Eels last week the Titans were still able to show flashes of brilliance.

Toby Sexton showed he is a young gun to watch out for in Round 1 and will hopefully be steering the Titans enforcers around the park once again.

Star playmaker AJ Brimson will make his first appearance after his five-eighth switch, while the Gold Coast side will still be without winger Corey Thompson.

The Warriors were incredibly unlucky in their Round 1 recent clash against the Dragons last week going down 28-16, and with the absence of Shaun Johnson, former Titans half Ash Taylor will make his New Zealand debut.

Wingers Dallin Watene-Zelezniak and Viliami Vailea are also out injured, welcoming Adam Pompey and Marcelo Montoya into the starting side.

Young star Reece Walsh also will make his first appearance in 2022 after missing Round 1 due to suspension.