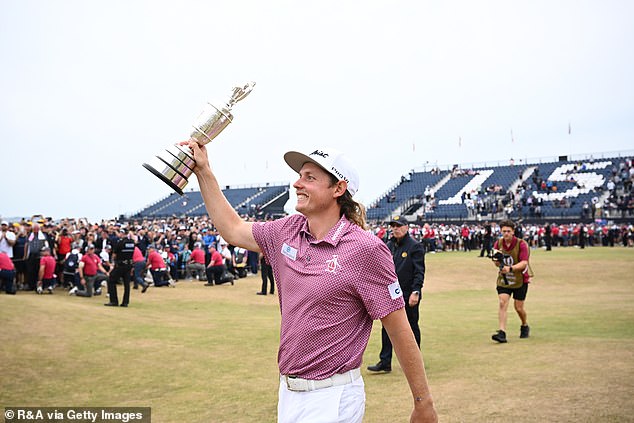 Cameron Smith has etched his name into Australian sporting folklore with his history-making victory at the British Open on Sunday – and greats of all sports are lining up to congratulate him.

A blistering eight-under 64 in the final round led the Australian to his first major title as he finished at 20 under par.

Cam Smith is a golf unicorn. However many tools there are in golf, he has that many tools

After starting four strokes behind Rory McIlroy and Viktor Hovland, he came roaring back on the back nine with five birdies in a row and held off his rivals for a historic and memorable victory at The Home of Golf at St Andrews.

‘I got beaten by the better player this week. To shoot 64 to win an Open Championship at St Andrews is one hell of a showing, so hats off to Cam, he’s had an unbelievable week,’ McIlroy said.

He now joins Dustin Johnson, Henrik Stenson and fellow Aussie Jason Day as the only golfers in history to get a 20 under par in a golf major.

His score of 268 was the lowest ever shot at St Andrews, beating Tiger Woods’ mark from 2000 by one stroke.

The pick of the messages came from former professional golfer turned influencer and podcaster Paige Spiranac, who has also been named Maxim’s ‘World’s Sexiest Woman.’

Spiranac both congratulated Smith and herself, while also sending out a cheeky message to her 3.2 million followers.

‘Congrats to Cam Smith for a historic win. And congrats to myself for picking him to win,’ she tweeted.

‘Now think of how much money guys would make if they only turned on the sound during my videos.’

Fellow Australian and former world No.1 Adam Scott was full of praise for his countryman and expects the victory to be the first of many for Smith.

‘It just confirms what probably what we all talked about at the players and throughout this year, that he is just made for the big stage,’ Scott said.

‘When he puts his mind to these big events, he’s going to win.

‘It wouldn’t surprise me to see him win lots of big events throughout his career.’

Scott is a former world No.1 and believes Smith has what it takes to reach the top of the sport

Day also believes Smith has the ability to take his game to the next level and become a true great of the sport.

‘The biggest thing now for Cam is to now go forward and strive to improve as that is the ultimate goal in this game, and that is keep improving each and every year,’ he said.

‘So, hopefully he does get better and better and I am sure he will because he is a very level-headed given he is only 28 years of age.

What a brilliant round from an exceptional, composed golfer. The best Oz win at the Open? His putting was outrageously good. https://t.co/JB2SPIzHnj

‘But then winning any PGA Tour event is career changing as he now has the benefit of a two-year Tour exemption, the prize-money and now being able to plan a schedule to the remainder of this year and the following two years.

‘That is a great luxury to have and while he didn’t receive the World Ranking points or the invitation to the Masters, and they will come, he is in a very good place.

‘And Cameron has so much talent I am confident he can go all the way in this game and win at the game’s highest level.’

As the old golf saying goes, drive for show, putt for dough. And former Masters champion Trevor Immelman said Smith’s short game was the catalyst for the famous win.

Smith had eight birdies including six on the back nine, while McIlroy could only muster two birdies on his card.

‘[Smith’s putting was] some of the best ever seen under this pressure,’ Immelman said.

American podcaster and sports media personality Bill Simmons compared the clutch performance by Smith on the back nine to four-time NBA champion Steph Curry – an athlete famous for performing under pressure.

‘Cam Smith’s last 10-11 holes is some of the best golf I’ve ever seen. That was like watching Steph get hot in a playoff game,’ he said.

‘I’m so glad I got up to watch Cam Smith. It was one of the best rounds of golf I’ve ever seen,’ Cordy tweeted.