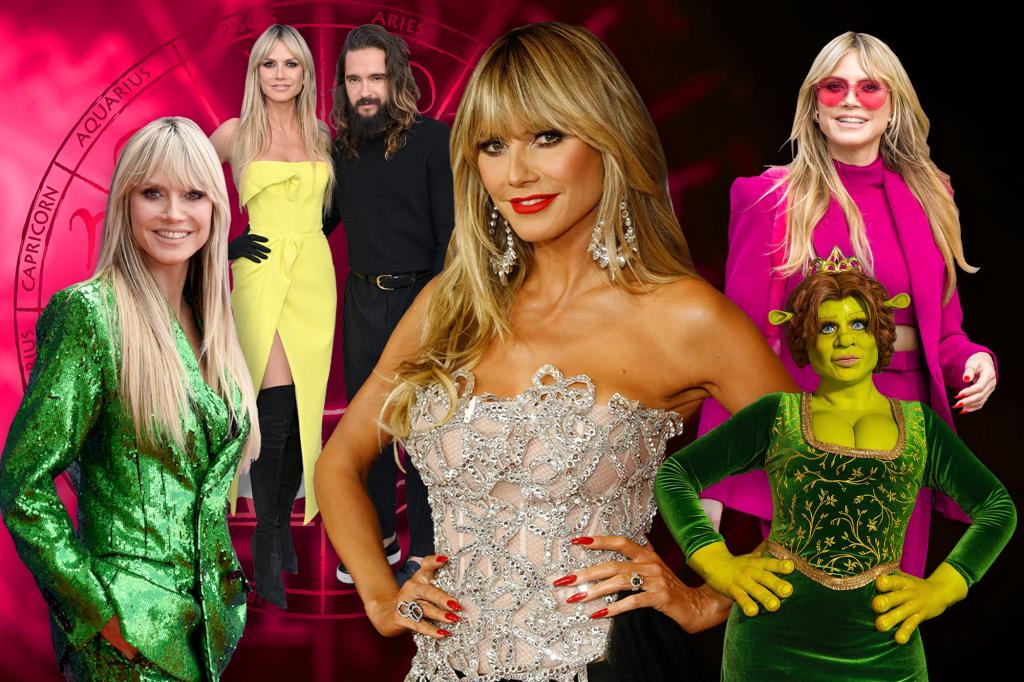 Heidi Klum is such a force in the fashion world that is unlikely her career will ever go Auf Wiedersehen.

As one of the most famous Victoria’s Secret Angels that has ever strutted her stuff down the runway, the German fashion model skyrocketed to stardom 1994 when she appeared on the cover of Mirabella magazine but her ability to maintain her career required more than just devastatingly beautiful looks, but also from her ability to evolve into a business woman and mainstream global television personality.

As a veteran judge on “Project Runway,” “America’s Got Talent,” Making the Cut” and more, she’s been able to carve out a special niche all her own. Yet, her artistry extends beyond just fashion, modeling and coachin.

Klum’s high-profile Halloween parties have cemented her even further as a pop culture icon—with outrageous costumes, A-list celebs and spooky décor (hi, yes, hello, I’d love to be on the guest list)!

Her sense of humor, too, has brought even more fans—even joking about a $2 million insurance policy on her legs! Giving glimpses into her personal life—whether it was with ex-husband Seal or present hubby Tom Kaulitz—Klum’s charm is nearly irresistible. So what makes her such a media darling—and what lies ahead for her? Join me as we dive into her cosmos because I’m a pop culture astrologer and I can see it all.

Heidi Klum was born on June 1, 1973. This makes her a spicy Gemini Sun with an equally sassy Gemini Moon. Her birth time has not been confirmed by me directly (get at me!), so without that information, we cannot definitively recognize her Ascendant. No worries, though, because I can still see a great deal about her! When it comes to elemental energy, this queen is an Airy social butterfly!

She is a master of communication and highly intellectual, which is why her wit, humor and charm are on level ten! In fact, most of her planetary placements are in Gemini—the zodiac sign known for its profiency in social connection—and Libra—one of the sweetest and most charismatic zodiac signs of all. She was also born on a new moon, meaning that she craves constant new beginnings and has no fear of recreating herself or her path—in fact, this is how she thrives.

If this all wasn’t clear enough, her astrological aspects reveal even more brilliance and communication skills. She’s a naturally optimistic and joyous individual who literally lives to have fun. Her Mercury, ruling her mind, is united with Venus, bringing her an eternally youthful nature with a pleasant demeanor in all ways. She’s drawn to beauty in all capacities, and yes, this brings her a massive fashion sense. Her Mercury is also united with Saturn, bringing power and strength to her mind and communications, too.

This is why people naturally respect her ideas and vision, no matter what. She has one of the luckiest features in her chart anyone could ever have, too, with her Sun and Moon linked perfectly to Jupiter, the planet of fortune, luck and favor.

She was guaranteed to be popular and successful—and yes, money was always going to rain down on her wherever she’d go. The next theme that is just so fun in her birth chart is that she is hella feisty. Her Sun links to Mars, which brings her tremendous drive and an excitable nature.

Astrology 101: Your guide to the stars

She literally thrives on adrenaline and is unafraid to be bold and daring. She lives to break conventions and stand out from the crowd, as Uranus, the planet of the rebel and eccentric, is also heavily aspected in her chart, too. Oh, and wanna know where she gets her immense creativity and Halloween inspiration?

Well, Venus, the planet of art, dances all over her chart. But the most important thing is that her Sun is opposite Neptune, which quite literally brings her a visionary creativity, as well as an ethereal, otherworldly magic to her. She was born to unleash creativity and art in every possible medium she can.

Is Heidi Klum astrologically compatible with Seal or Tom Kaulitz?

When it comes to Klum’s ex-husband, Seal, and her new boo, Tom Kaulitz, what do the stars have to say? Let’s take a peek. First off, Seal, 59, was born on February 19, 1963. This makes him a creative Pisces Sun with a practical Capricorn Moon. Kaulitz, 32, was born on September 1, 1989. This makes him a determined Virgo Sun with a grounded Virgo Moon. Right away, I think this is fascinating because her ex-husband and new one have Suns that are on a polarity—showing that she’s drawn to men that in a sense are like two opposite sides of the same coin. Both of her partners also possess earth moons, which means that they crave stability and security, especially around emotional settings and home life. This is something she values, as it gives her a strong foundation of trust. When I compare her chart with Seal’s, there is a huge amount of compatibility between their planetary alignments. Romance and passion were strong, but so was the sense of building a long-term basis. This rapport felt more sensual, intimate and needed to help them both grow at that point in their lives. I actually ultimately think that their compatibility is a bit stronger than hers with Kaulitz if you’re just looking at it from a purely romantic and emotional level. Her connection with Kaulitz certainly has great strength to it, too, but this connection actually favors the career aspects and a synergy of lifestyle more than hers did with Seal’s. Clearly, as she’s evolved and seen her star grow ever brighter, she has decided she needs someone who is entirely understanding of the many demands of her professional and social life, rather than focusing more on just building a happy home and a family.

What are predictions for Heidi Klum?

Step right up, Mrs. Klum, we’ve got lots to talk about! First off, 2022 and 2023 will be quite joyous years, as Jupiter will be smiling upon her social life. She will also see her fan base increase, as well as be in the spotlight for projects that make her happiest. Growing closer with her friends and family will also be a key theme.

She will even reach some new personal milestones, aspirations she’s been building toward for over a decade. However, the one area I do see she will experience shifts, though, is around her health. She could end up making changes to her diet, fitness routine or even switch up some health and beauty specialists she goes to.

2023—especially beginning the summer—will actually be a slower year for her, as she takes time to lie low, chillax and brainstorm what big endeavors personally and professionally she wants to develop next. Luckily, by 2024, she’ll be entering one of the best years of her entire life as Jupiter unites with many of her Gemini placements. Bright new beginnings will all take place then. You heard it here first.

Kyle Thomas is a globally recognized pop culture astrologer who has been featured in “Access Hollywood,” E! Entertainment, NBC & ABC television, Cosmopolitan magazine, Hulu, Bustle, Elite Daily, Marie Claire and more. He is known for his cosmic guidance for celebrities, business executives and prominent influencers. His work harnesses the power of the stars in regards to entertainment lifestyle and trends affecting people worldwide. For more information, visit KyleThomasAstrology.com.