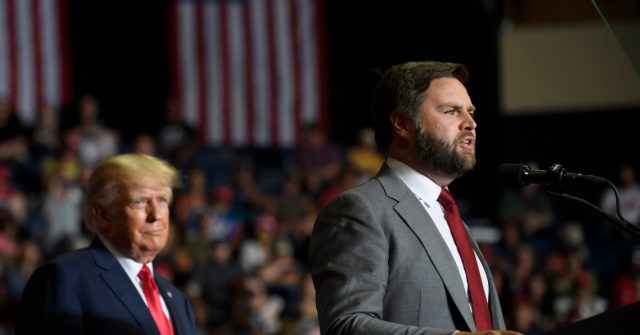 J.D. Vance, Republican candidate for U.S. Senate in Ohio, joined former President Donald Trump on stage at a “Save America” rally on Saturday evening and called for an increase in border patrol agents instead of IRS agents.

As Trump called Vance to join him on stage, he noted that Vance is supported by “all the bravest and boldest conservatives in the country,” including Fox News host Tucker Carlson, Sen. Josh Hawley (R-MO), and former Trump adviser Stephen Miller. Trump said:

The entire MAGA movement is for J.D. Vance, and when J.D. wins his race this November, you are going to hear wailing from every corporate newsroom in New York and Washington, And you’re going to hear crying Chuck Schumer howling with rage because J.D. Vance is going to clinch the Senate for the Republicans.

Are we having a good time, is it great to have the president back in Ohio? Here’s the thing about this crazy lying fraud Tim Ryan. His whole attack against me is that I’m out of state. I’m from California, even though the reason I left the state when I was 18-years-old was to enlist in the United States Marine Corps and go and serve my country.

“But the President may not even know this. You know, Tim Ryan has not one but two books on yoga and meditation,” Vance said.

“Tim Ryan has called to ban gas-powered cars, and Tim Ryan has voted for the Green New Deal,” Vance said. Who’s from California, Tim? It sounds like you are. This is simple. We gotta get back to common sense. We’re gonna stop hiring 87,000 IRS agents. We gotta fire those guys and hire some Border Patrol agents.”

Jordan Dixon-Hamilton is a reporter for Breitbart News. Write to him at jdixonhamilton@breitbart.com or follow him on Twitter.