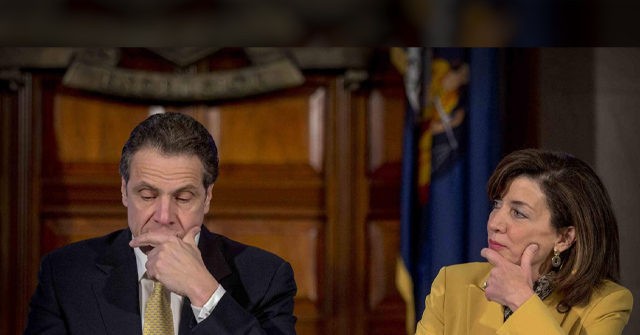 Gov. Kathy Hochul (D-NY) is under fire for stretching ethics rules by receiving more than $475,000 in campaign donations from state officials who were appointed by her disgraced predecessor, former Gov. Andrew Cuomo.

Despite this rule, Hochul took more than $475,000 in campaign donations from at least 40 political appointees or their family members who serve on government boards and agencies.

For example, Battery Park City Authority board member Don Capoccia donated over $56,000 to Hochul’s campaign in the months leading up to the Democrat gubernatorial primary in June.

In addition, Hochul received more than $90,000 from Joe Belluck, a trial lawyer who Cuomo appointed to serve on two statewide panels, and Belluck’s wife.

However, Hochul’s team argued the longstanding executive order does not apply to her because these donations came from state officials who Cuomo appointed.

“We’ve been clear from the beginning of Governor’s Hochul’s term that people who are appointed by her are prevented from donating once they are appointed. We have followed that straightforward standard consistently and strictly,” Hochul campaign spokesman Jerrel Harvey said.

Julie Wood, a spokeswoman for the governor’s office, argued Hochul has applied the ethics rule more “broadly and strictly” than her predecessor and claimed Cuomo’s team “violated their own rules.”

Despite Hochul’s argument, she later appointed Belluck to New York’s new Cannabis Advisory Board in June.

Republican nominee for governor Rep. Lee Zeldin blasted Hochul for taking donations from political appointees and their relatives and pledged to enact a “stronger” executive order to enforce the ethics rules on campaign contributions from statewide officials appointed by the governor.

Another day, yet another Kathy Hochul corruption scandal involving her campaign donations.

Now we learn she took in $400k in donations from political appointees and spouses despite an Executive Order in place that seeks to prevent much of this. https://t.co/tFcfz2ji9W pic.twitter.com/a6dWq4yTAQ

Each week, we are learning about new Hochul scandals, whether it’s giving massive no-bid state contracts to her donors, abusing state aircraft to fly around New York, or this latest scandal and countless others. Even during her time as Cuomo’s Lieutenant Governor, she was always silent, complicit or out to lunch scandal after scandal.”

“As Governor, I will sign an enhanced Executive Order stronger than the current EO, expanding the prohibited donor list to include spouses, and will call on the New York State Legislature to codify this into law,” Zeldin concluded. “We cannot allow this culture of corruption to continue in Albany. We need to end the corrupt Hochul-Cuomo machine once and for all and remove Hochul from office on November.”

Jordan Dixon-Hamilton is a reporter for Breitbart News. Write to him at jdixonhamilton@breitbart.com or follow him on Twitter.