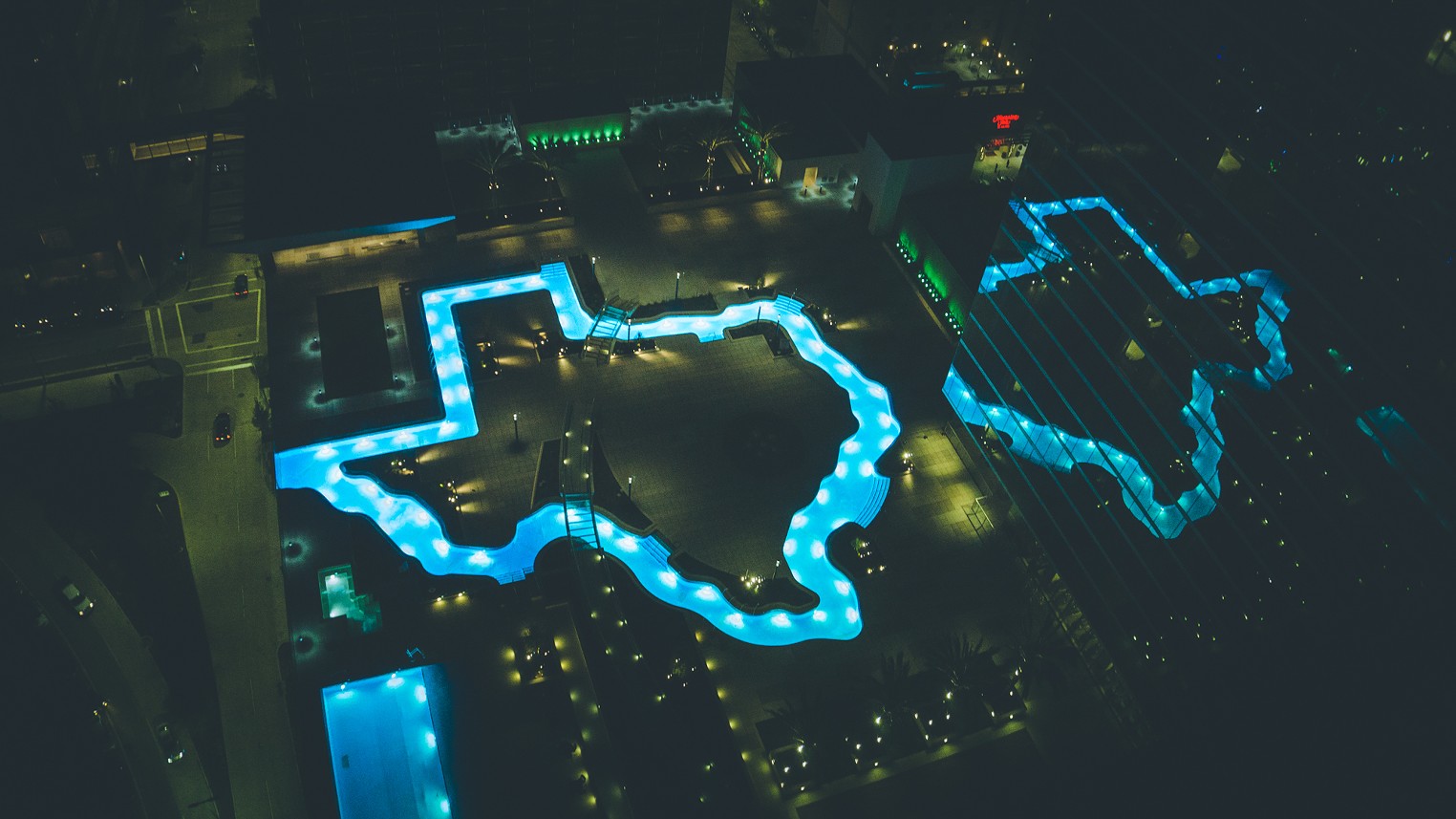 Twice in the last decade, we at the Houston Press have compiled our list of the 100 things every Houstonian must do. The first list was nearly 10 years ago and limited to a very small radius around the city (30 miles). In 2017, we expanded it to include distances slightly farther away — up to 100 miles — given at how much is so close to us. How can we exclude the Gulf of Mexico?

In 2022, many things have changed and some remain the same. If you are familiar with these lists, you’ll probably see a few old favorites. They are classics for a reason. We’ll point them out as we go along. If not, now you can take a look at all the stuff you need to do in the coming weeks and months. We’ll be releasing these 10 at a time over the next couple months, so enjoy and (cue Jurassic Park music) welcome to the Houston Bucket List, 2022 edition.

Float on the roof of the Marriott Marquis in the Texas-shaped lazy river pool.

When it was announced that the Marriott Marquis downtown would feature a rooftop pool-slash-lazy-river in the shape of the state of Texas, no one should have been surprised. We are still surprised Texas hasn’t built a wall in the shape of the state of Texas that could be seen from space like the Great Wall of China. So, a pool-shaped Texas on the roof of a downtown hotel makes perfect sense. You must be a guest of the hotel to take a swim, so don’t get any clever ideas. But, if you want to experience the grandeur of Texas in pool form, this is your best bet.

If you don’t think you would enjoy riding on the tiny replica steam engine train in Hermann Park, we ask that you please try it anyway. It’s like reversing the clock to when you were young and happy and actually enjoyed cool things LIKE RIDING ON A TINY TRAIN! And if you want some sort of practical — sigh — reason to choose this seemingly frivolous activity, the train actually makes a pair of stops, near the Museum of Natural Science and close to the Texas Medical Center. It’s fun and practical but mostly super fun!

Visit the Livestock Show (leave the rodeo for the music fans).

The Houston Livestock Show and Rodeo is one of the biggest events of the year, no doubt. The lineup of artists who perform each year is a closely guarded secret right up until it isn’t. And the carnival that accompanies the event is exactly what you might imagine from a classic carnival with stomach-churning rides and stomach-filling fried foods. But, if you want to get at the heart and soul of the rodeo experience, bypass the ferris wheel and George Strait show and head for the livestock portion which not only tells the tale of how your food gets made, but gives you direct access to many of the critters being presented. It’s certainly not for those who feel faint over eating meat, but it is a good lesson in farming and a chance to see some of the animals up close and personal.

One of the best buffets in town and it’s vegetarian!

Have some vegetarian Indian food inside a Hare Krishna temple at Govinda’s.

One of our favorite things to do with visitors from out of town is take them to the ISKON of Houston temple on 34th Street in Oak Forest, drive around back and introduce them to Govinda’s, the lovely little Indian food buffet serving up vegetarian (and vegan) food six days a week. Like all buffets, it’s reasonably priced, but unlike most, it is absolutely spotless and loaded with Indian classics that rotate from day to day. Twice each week, it goes 100 percent vegan as well. And, if you feel so inclined, visit the temple for Darshan when it is open. It’s yet another way to explore Houston’s extreme diversity and get some killer food in the process.

Have a cold one at Alabama Ice House. [CLASSIC]

The ice house is a staple of Texas beer drinking and the Alabama Ice House is Houston’s oasis. Sitting on what might be described as the edge of River Oaks and the Montrose, the sprawling dusty picnic-table-dotted yard is perfect for kids, adults and the dogs that invariably roam from table to table. There is shade from large oak trees and a few tables under awnings, a good spot to relax even in the brutal heat of summer. It’s a classic Texas beer drinking experience with damn fine tacos from the truck out front.

If you find cemeteries morbid, take a drive down Washington Avenue to Glenwood Cemetery, pull into the gated drive and make your way around the hilly, oak-tree-lined winding path that moves between Washington and Buffalo Bayou to the south. Yes, it is covered in the headstones of dearly departed Houstonians, but the grounds are absolutely spectacular. If not for the graves, it would make an ideal picnic spot. One of the most fascinating of those laid to rest dating back to the 1800s here is reclusive businessman and eccentric Howard Hughes.

Twenty years ago, riding a bike in Houston outside of the suburban neighborhoods (and sometimes even there) was taking your life into your own hands. It still is to a degree, but thanks to the dogged determination of cyclists, urban planners and conscientious civic leaders, Houston has transformed once barren bayou banks into miles and miles of hike and bike paths. It was an incredible undertaking going back to the first efforts in and around the Heights and Oak Forest. Now the crisscrossing trails cover much of the inner core of the city and are often filled with cyclists, joggers and people walking their dogs all days of the week. A rare win for alternative transportation in a city of cars.

There are lots of ways to volunteer in Houston. The Food Bank is one of the best.

Houston has some of the most philanthropic citizens of anywhere in the country, thanks in part of the overflowing wealth created by the energy industry. But if you want to do more than just write a check (or if you don’t have those kinds of resources), consider taking a day to help the dedicated people at the Houston Food Bank by volunteering to help pack and load donated foods for many of Houston’s hungry. Like many big cities, far too many Houstonians suffer from food insecurity, particularly children. The Food Bank is working hard to help change that and perhaps the most valuable gift you can give them is your time.

Take a cruise out of Galveston. [CLASSIC]

We don’t really blame you if you were skeptical when cruises first started leaving Galveston years ago, but by now we should all be used to the sight of giant Carnival ships towering over the Strand. In fact, Galveston is quite a popular destination for those who like to cruise. It has become a staple of the Galveston tourism business as well. Now there are three cruise lines — Royal Caribbean, Disney and Carnival — leaving almost every day for Mexico and islands in the Caribbean. Granted, the pandemic may have dampened the spirits of cruisers and those who don’t feel like it is their cup of tea, but they are back and more popular than ever.

View the entire region from the top of the San Jacinto Monument. [CLASSIC]

What makes the San Jacinto Monument so unique is where it is located. There is very little around it anywhere close to as tall as it is. In fact, it is the tallest war memorial in the world, making it a perfect spot for seeing just about every part of Houston from the very top — assuming you are OK with heights. The grounds of the memorial, where the Battle of San Jacinto took place, are also quite fascinating as is the history museum if you prefer to remain tethered to earth. But the view from the top cannot be beat.