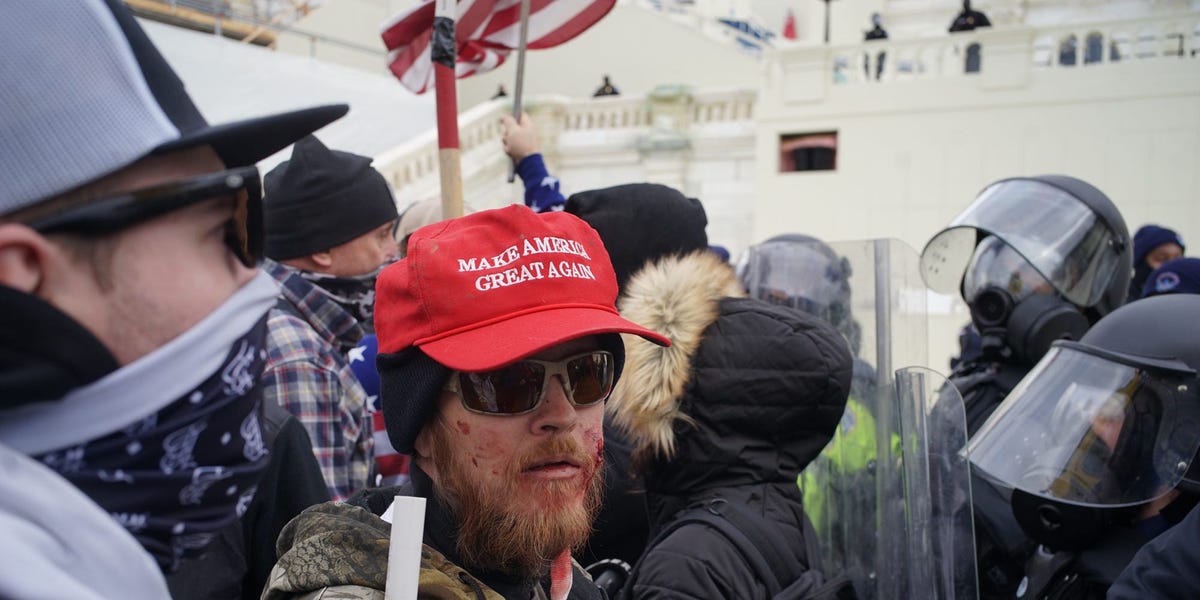 On the morning of Jan. 6, 2021, I joined the crowd of tens of thousands of MAGA supporters on the Mall as President Donald Trump – clinging to power after losing re-election – spoke through two enormous Jumbotron screens.

The crowd stretched out from the White House and all the way up to, and then around, the Washington Monument. He was saying “we will never give up, we will never concede” and that “everyone here will soon be marching over to the Capitol.”

I looked at my phone to see a text from my editor saying the president’s supporters had begun to force their way though police barriers and were moving to the Capitol. “Should I stay here or go?” I asked. “Go,” I was told. I found a scooter and sped off as quickly as I could.

When I reached the Capitol, I saw that a large crowd had already formed on the grounds. There was no fence, and you could just walk right up to the steps. As I got closer, I noticed a commotion and saw that the crowd was pushing violently against the metal police barricades. The police were using pepper spray, their batons, and flash bang munitions to try to hold them back.

As the police beat back each wave, it was clear they were overwhelmed. Some of the attackers were gripping metal rods and wooden sticks in their hands. Some wore gas masks and used walkie-talkies to communicate. I heard cries of: “Proud Boys to the front!”

I was in a tightly packed part of the crowd when a guy starting haranguing me. “Why are you taking pictures,” he demanded to know, poking me roughly in the chest with his index finger. I wasn’t about to tell him that I was a photographer on assignment, having seen their hostility and violence towards journalists on other occasions. I also wasn’t going to lie. That creates more trouble than it’s worth, even in tricky situations. So I deflected the question, and told him, “It’s ok, everything’s fine, it’s all right.” Perhaps that confused him, because his only response was to repeat his question, with profanity this time. Hemmed in as we were by the crowd, I had no opportunity to leave, so I placed my left hand on his shoulder and continued to reassure him. This farce of a standoff continued until I sensed an opening in the mass of people behind me and I broke off and slipped away.

After that, I tried to be as discreet as one can be with two cameras, and avoided more conversations. I was wearing a bicycle helmet and a balaclava covered most of my face, and noted with some relief that I was less likely to be identified as non-white.

There’s a point, and sometimes it’s very hard to tell where that point is, when a protest stops being symbolic and becomes an act of violence. That day at the the Capitol, I watched, and took photographs, as everything boiled over. This was not a game anymore. This was not a performance. This was an attack on the legislature of a superpower. It was an occupation.

The attackers had their own pepper spray and bear mace, and had seized police barricades, shields, and helmets, cries of could be heard. Groups of men turned their backs against the police in order to dig in their feet and push harder. Exhausted and wounded police officers had far fewer replacements than their assailants when they fell out of their lines.

I kept looking back toward the Mall, towards the Washington Monument and the Lincoln Memorial, expecting that police were swiftly blocking off streets and accepting reinforcements to stop and restrain this crowd. I kept looking for that all afternoon, and I never saw it. I didn’t see any arrests, or possibly only one arrest.

By early afternoon, the police line collapsed. I saw it happen before me. It was stunning to see police officers break and retreat inside the building. Many of the police units that I saw didn’t have gas masks or the correct body armor. They were actually less well equipped than many of the people that were pushing against them.

The police finally decided they had lost the battle for the western front of the building and they retreated inside the building. At this point, the attackers controlled the entire outdoor area of the Capitol. I had never seen an American police force retreat while it was under attack. The attackers broke windows and doors, and they got in.

I decided not to join them.

At the end of the day, when sunset came, there was a copious cloud of tear gas and reinforcements finally came through.