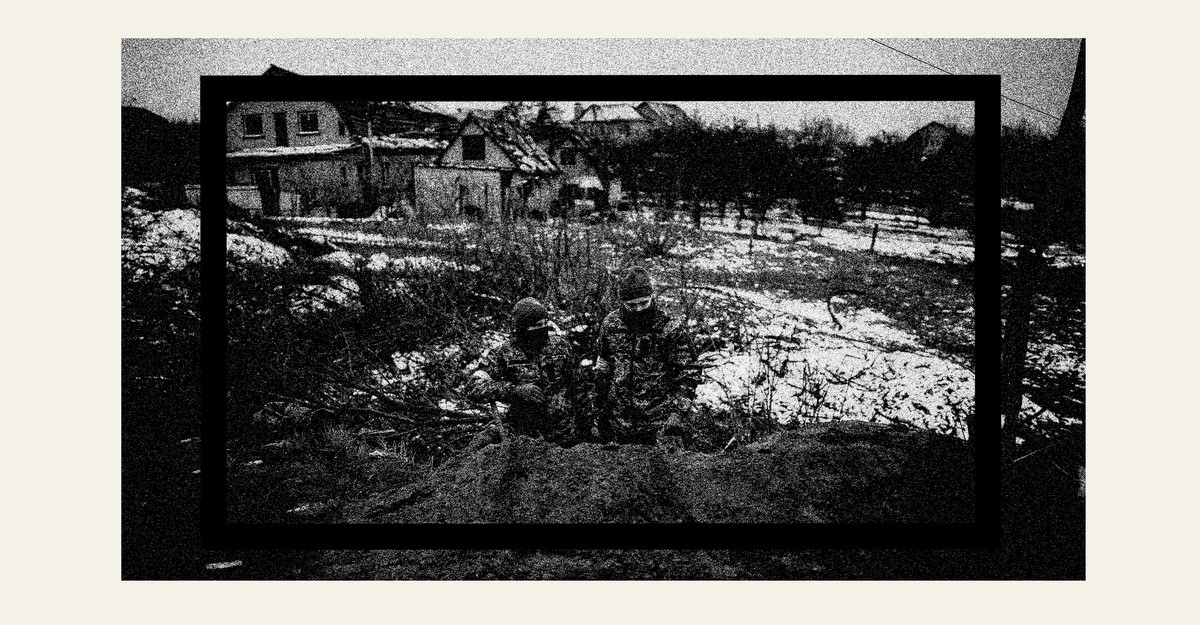 This is an edition of Up for Debate, a newsletter by Conor Friedersdorf. On Wednesdays, he rounds up timely conversations and solicits reader responses to one thought-provoking question. Every Friday, he publishes some thoughtful replies. Sign up for the newsletter here.

Earlier this week I asked for your thoughts about the war in Ukraine. Every single correspondent was sympathetic to Ukraine, not Russia. There were, however, sharp differences about what brought the world to this point and what should be done about it now.

Kasia lives in the United Kingdom but is Polish, speaks Russian, and follows Russian-language media. She offered these observations:

In February, I was visiting my country, notably the city of Białystok, where a museum just opened commemorating people being forcibly deported to Siberia by the Soviets. Many perished en route or in gulags. One item stood out. A simple rosary made with a piece of string and bread, likely made by someone who only received one portion of bread a day while doing hard labor in punishing weather. A symbol of resilience, hope and sacrifice. When I follow the reports from Ukraine I see that resilience and determination.

I follow Russian commentators on YouTube (I speak Russian) and I see their despair that this war is carried out in their name. I see also how successful the Russian propaganda is, how willing people can be to accept the official version. I don’t blame them. I don’t know what it feels like to live in Russia under Putin for so long—to want to believe in the intoxicating image he is presenting instead of a less appealing reality. Isn’t it easier to stay asleep? Propaganda would not work if it didn’t fulfill important emotional needs.

Roger backs the approach that the Biden administration is taking but wants him to move faster:

I think Joe Biden has done a pretty good job so far on our handling of Ukraine, rallying allies, declassifying and publicizing intelligence, etc. I support the idea of not sending in U.S. or NATO troops and not enforcing a no-fly zone to avoid direct conflict with Russia and possible escalation. It will be difficult to watch but still the right thing to do. But, I strongly support getting more anti-tank and anti-aircraft missiles, ammunition, food, fuel, etc. in there ASAP to try and help the Ukrainians fight. There can’t be any dilly-dallying as Biden did in “studying” the removal of allies from Afghanistan. Those who say we can’t risk getting weapons into Ukraine for fear of Putin have it wrong. At some point, short of troops, we have to do what’s right without quivering in fear of a bully.

William is having trouble enjoying everyday life knowing that the Ukrainian people are staring down death:

Why aren’t we doing enough? How can we watch the war in Ukraine, and then go have a nice sit down dinner with family, as if nothing is happening elsewhere? We sit glued to the television and cell phones––then we pause the video of war to go and get a glass of milk, kiss our kids good night, then hit play on that live bloodshed again. Back to the visions of people suffering, losing loved ones, new heroes born, destruction, and the fear you can see in those people in the video. That war, the one happening right now, with Ukraine doing all they can to stay in existence, is happening while we go about our day.

I’m tired of watching news where everyone is afraid to do something because of some guy who can easily push that button to launch nuclear missiles. We just allowed this guy to be the bully that no one stops. We fear to help the weak, since the bully would ruin our day and make us suffer. That seems to me like we’re allowing the bully to keep bullying. I don’t want to die, I don’t want my kids to die or my friends and neighbors. But, I think it’s time to let the bullies know: no more––no more threats because you have nuclear warheads and we fear you will launch them. I would rather those bullies use their nuclear weapons now, than continue to live in fear for the rest of my life, or knowing my kids would do the same.

We cannot sit idly by and watch the annihilation of Ukraine. Continuing to bomb civilian areas … seizing nuclear power plants … It’s like Germany rolling into Poland. Democratic nations have a duty to stand up militarily to Putin’s aggression. Sanctions are necessary but we need boots on the ground.

Michael has different values and intuitions:

As much as Zelensky is to be admired for his stand, I am appalled by his idea that the West should do whatever it takes … to protect his country! That is plain wrong!

… We have a “little” country’s leader goading a big player into risking the Globe for his country. Up to that point I supported Zelensky but now I see him in a different light!

I am old enough to remember the Budapest Memorandum … Let Putin get away with this and he will be enabled to carry on for more. He’s voracious for ultimate power.

My concerns are that if we back Putin into a corner he will lash out with a so-called tactical nuclear weapon. If that should happen it could suck the US and NATO into a far more dangerous situation. It is hard to put the genie back into the bottle.

Common sense tells you to never back a dog into a corner and this is no different. To end this without expanding into World War 3, I think world leaders need to leave a way out for Putin where he can save face and at least pretend to have a favorable outcome. Putin will never return home with his tail tucked between his legs. As bad as things are for the freedom-loving Ukrainians, a world war with nuclear weapons is unacceptable for all of mankind. We must never use nuclear weapons on this planet again.

Svetlana is glad this isn’t happening under Donald Trump and wants to welcome Ukrainians to the United States:

I immigrated from Minsk in 1979 at age 13 and cannot be more grateful for living in the US right now. I am equally grateful that we have an experienced adult in the White House. Otherwise my horror at what is happening to Ukrainians would be compounded by the dismay at witnessing incompetent actions and grotesque statements from the top of the administration. We should open our arms to Ukraine’s refugees.

Keith worries about the faction of Republicans who like Vladimir Putin:

The “Trump wing” of the party has expressed sympathy and sometimes open support of Putin in the past and, if polling data are correct, there is a better than reasonable prospect of Republican dominance in the near-term future. If fealty to “strong man” government remains a feature of the GOP, Putin will have reason to believe division in the US, coupled with open sympathies to his form of government, will present a congenial solution to his Ukraine problem.

Bob argues that in the long run, weakening Russia means weaning ourselves off fossil fuels:

Oil and gas are global markets and Russia will always do well in this sector because they don’t care how much environmental damage they do to increase production, and they have lots of oil and gas to access with this approach as the tundra thaws and the Arctic melts. The most viable long term solution to Putin and others like him must include reducing the demand for these commodities rather than yet another round of “supply-side” actions.

Any U.S. citizen who praises Putin and any other Dictator is a threat to all of the USA for they are TRAITORS. It’s not Free Speech, it is SEDITION.

N.L. feels lucky to be an American, and hopes Russian soldiers will turn on Putin:

I feel so grateful I live in a country where all voices can be heard. We might fight, we might argue, we might not get our way, but if we continue moving toward an equitable and just country, I will embrace the fighting among parties as long as it’s in a country in which open expression of views is permitted, not oppressed. I wish the Russian people were free.

The courage of the Ukrainian people is something I hope many Americans—those who haven’t ever fought for freedom—feel in awe of. I know I do. I encourage the Russian military to turn on their real aggressor: Putin. They were lied to. They are killing their brothers and sisters when the person they need to go after is him. He doesn’t care for them.

Cliff believes that Russia’s leader isn’t long for his position:

When he launched the attack on Ukraine, Putin effectively committed suicide. The only remaining question is how much of the rest of the world he takes out with him. While some of us will pay a heavy price, we all have the power to take actions that will help to minimize the answer to this question. I pray that we will have the courage to take such actions.

And last but not least, Diane appeals to Russian soldiers:

Lay down your guns, go home, stop killing for Putin. Someone needs to remove him, he has done nothing for Russia but cause harm to all citizens. He doesn’t care if you starve or lose everything because of “his War.” Russian Soldiers, think about the people you are murdering because of Putin! What if it were your mother, father, sisters, brothers, wives, girlfriends and children who were brutally murdered with every missile sent to Ukraine? Feel with your heart, know how wrong you are for following Putin and his vile war.

Thanks for your contributions. I read every one that you send. See you next week.