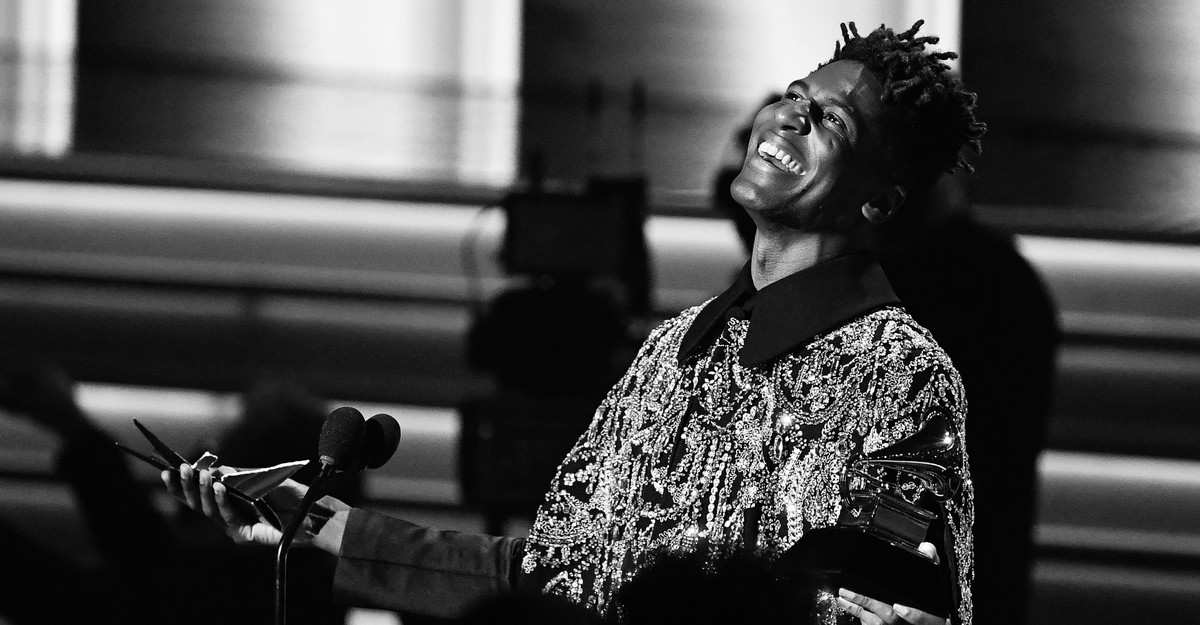 The Grammys giving Album of the Year to a release that peaked at No. 86 on the Billboard 200 might seem to call into question the very meaning of Album of the Year. Yet no one should be too perplexed that the Recording Academy handed last night’s final prize to We Are, by Jon Batiste, the accomplished jazz pianist and bandleader (and the music director of this publication). The pop fans who are tweeting phrases like scammys in response to Batiste’s victory over more famous artists—Ye (formerly known as Kanye West), Taylor Swift—just play the same shell game as the awards show they criticize. In music, no one knows exactly what importance means anymore, if anyone ever did.

Going into the ceremony, many pundits guessed that we were in for an echo of 2020, when a new teenage hitmaker, Billie Eilish, dominated the “Big Four” general categories: Song of the Year, Record of the Year, Album of the Year, and Best New Artist. This time, the juvenile juggernaut would be Olivia Rodrigo, the Disney TV actor whose early-2021 ballad “Drivers License,” went supernova—and was followed by three other top-10 singles and a best-selling album, Sour. A singer-songwriter who plays instruments and has her own fresh vibe, Rodrigo seemed like the kind of cultural unifier who wins Grammys by the carload. In a moving rendition of “Drivers License” last night, she showed the charm—tentative mannerisms, intimate lyrics, bold emotions—that justified predictions of a sweep.

Yet the Grammys ended up defying easy narratives. Rodrigo did win three awards: Best New Artist, Best Pop Vocal Album, and Best Pop Solo Performance. But Song of the Year and Record of the Year both went to “Leave the Door Open,” by Silk Sonic, the ’70s-funk superduo of Bruno Mars and Anderson .Paak. Then, when Lenny Kravitz announced Album of the Year at the end of the night, Batiste put his hands up in an expression of what looked like genuine amazement. His speech also communicated the humility of someone who never expected to win. “I believe this to my core,” he said. “There is no best musician, best artist, best dancer, best actor. The creative arts are subjective.”

Certainly true. To understand why so many Academy members judged the 35-year-old Batiste’s album to be year-defining, consider his career. As the bandleader on The Late Show With Stephen Colbert, he has been on television, night after night, since 2015—which means he is one of the most visible working musicians in America. Other widely consumed projects, such as his soundtrack for the Pixar film Soul, have built him the kind of renown that is perhaps less explosive than that of a pop phenom, but is still significant and pervasive. The songs of We Are—vivid, exploratory pop soul—are musically impressive, broadly accessible, and rich with social consciousness. His colorful, go-for-broke Grammys performance of his single “Freedom” demonstrated the showmanship of someone who welcomes a cross-generational, cross-genre audience—someone easy to like, and impossible to root against.

So he is a traditionalist choice to win—but a traditionalist choice for an institution that has been changing. Following years of accusations about gender and racial bias—including from the Recording Academy’s own ousted leader—the Grammys have lately been on a reform mission. Led by CEO Harvey Mason Jr., the academy invited 2,700 new members last year in an effort to increase diversity. An eleventh-hour decision to expand the number of nominations in key awards fields this year also indicated a clear desire by Grammys leadership to break the mold. Lo and behold, this year’s prizes ended a shameful streak: Batiste is the first Black Album of the Year winner since 2008. In fact, the winners in the Big Four categories this year are all people of color.

Though such wins represent progress for the institution, they don’t mean that the Academy has figured out how to bridge the gap between hoary ideas of musical quality and current ideas of relevance. Which is to say: The Grammys’ long-standing biases against hip-hop and R&B appear to remain. Acceptance speeches by the new emcee Baby Keem and the long-underrated R&B singer Jazmine Sullivan, each for wins in genre-specific categories, made for some of the most endearing moments of the telecast. But the Black winners in the general categories are Boomer-friendly soul revivalists, and only one young rapper (Lil Nas X) got to headline his own primetime Grammys set. The patterns that have led Drake, The Weeknd, and Frank Ocean to boycott the show clearly haven’t been upended.

Still, overall, this year’s ceremony felt like a step toward stability and sustainability for an institution whose credibility has been in jeopardy. The second Grammys since the departure of the producer Ken Ehrlich, it continued the show’s move away from gimmicks-driven bloat, and toward a polished, if unsurprising, revue of nominees. With Trevor Noah presiding in a cavernous Las Vegas arena, the event’s only hint of messiness came from Doja Cat’s acceptance speech, in which she talked about peeing. The performances were mostly solid too. Lady Gaga’s highly animated jazz recital, BTS’s spectacle of secret-agent-themed choreography, Chris Stapleton’s grave elegance in front of laser lights—each one had something for the masses to like, and more for die-hard fans of each act to enjoy on replay.

In his speech about the subjectivity of art, Batiste emphasized the personal relationships, separate from perceived prestige or notoriety, that listeners form with music. “A song or an album is made, and it almost has a radar to find the person when they need it the most,” he said. That was a fitting coda for an award show trying to serve an idiosyncratic, atomized musical landscape where, more than ever, passion and popularity are hard to tell apart.