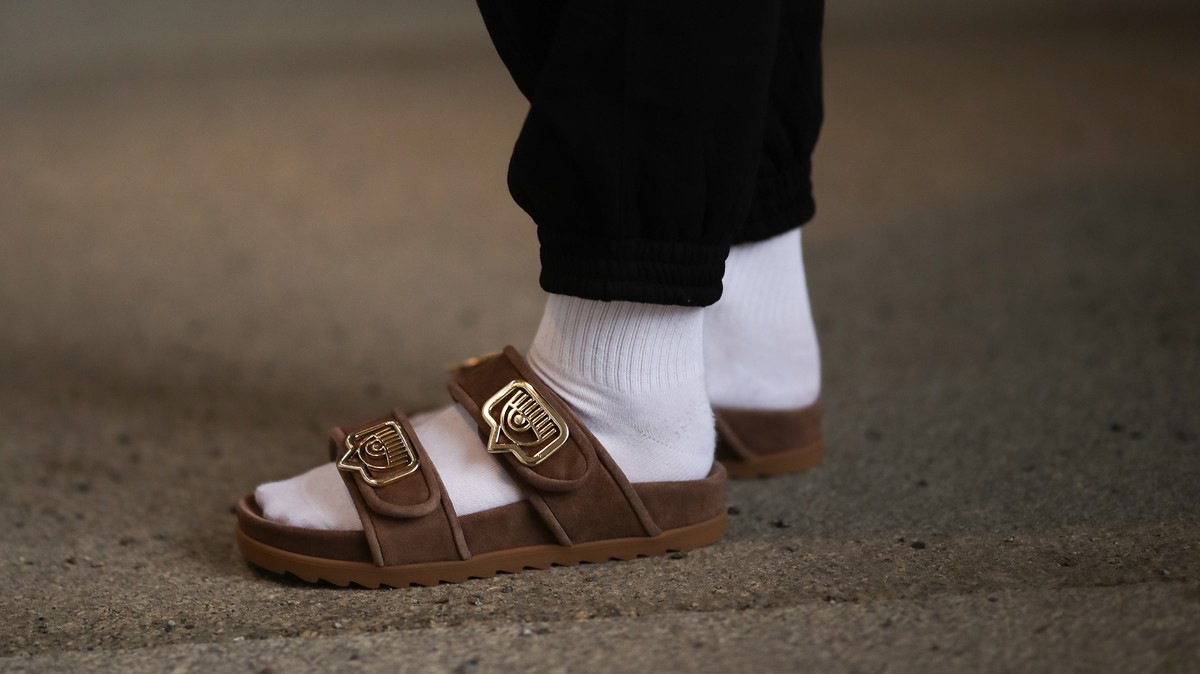 Back in 2014, when the term “normcore” first enjoyed mainstream popularity, it kinda seemed like a joke: Ha ha ha, looking “normal” is somehow trendy now! Hey look, cool kids are wearing their dads’ old trousers and their moms’ ill-fitting jeans and scrunchies and overalls and crew-neck sweatshirts and orthopedic shoes! Ha! Ha! Ha! “Style icons of normcore include Larry David, Steve Jobs (guhh, turtlenecks!) and Blood Orange singer Devonte Hynes,” wrote VICE contributor Chandler Levack in 2014, in a piece which framed the look as a “brilliant meme.” Because of the age group of the tastemakers of normcore (collective opinion seems to attribute it to a group of art students who suddenly started wearing Patagonia fleeces, cheugy shoes, and tourist trappings), the look was deeply rooted in the essential garb of the 90s, with the intention, according to Levack, being “to go back to the womb, the grade 5 classroom, where everyone just wore novelty Northern Getaway sweatshirts and neon slush pants. To live inside your parents’ closet forever.”

One of the most prevalent trends to gain steam in the Normcore Era was a renewed acceptance of wearing socks with sandals. In 2014, the same year normcore was birthed as a concept, Gothamist ran an observational timeline noting important sightings of the footwear combo, declaring its return as evidence that we had reached “full Sad Dad status.” That’s not to say that the look was in any way new; the NYC culture blog also noted, via Wikipedia, that “old Romans wore socks with sandals at least 2,000 years ago.” But some vitriol against wearing socks with sandals has always stuck. To this day, that Wikipedia article opens with the statement: “Wearing socks and sandals together is a controversial fashion combination and social phenomenon that is discussed in various countries and cultures. In some places it is considered a fashion faux pas.” Time truly is a flat circle.

There were those who hypothesized that normcore was a silly flash in the pan, a sort of weird final stage of the irony cycle. The New York Times speculated that it might just be a “massive in-joke.” Well, guess what? Normcore won. Here we are, seven years later, and in cities from New York to Los Angeles, we’re in a bonafide sea of nondescript white sneakers, wire frame glasses, and dowdy 90s vibes—and we’re happier that way. Social-media-driven neo-streetwear brands such as Online Ceramics and Fantasy Explosion have built their mini empires on embracing mundanity and overly familiar, recycled clipart. And the socks-with-sandals look has firmly planted its flag as being not just acceptable, but somehow, against all odds, intentional.

During and post-COVID, this understated, post-“coolness” aesthetic makes even more sense. One of the important lessons of the last couple of years was that coolness is absolutely a construct, and when it comes down to it, being comfortable can be more integral to personal happiness than being able to flex some stiff, ill-fitting jacket that cost half your paycheck and hours of your day to acquire at a sample sale.

Hear us out: A cushy sandal or slide with a thick, marshmallowy sock is truly about as spa-like as it gets. And should you become a socks-with-sandals wearer, you’ll be in good company. R&B artists, runway models, TikTokers, comedians, an unrecognizable version of Pete Wentz—all have allowed socks with sandals into their waiting hearts.

Of course, now that counterrevolutionary child-of-celebrity-celebrities including Kendall Jenner, Kaia Gerber, and Rumer Willis are wholeheartedly embracing socks with sandals, there’s always the chance that the look will once again verge into the cringe zone. But that’s the thing with fashion; the pendulum always keeps on swingin’. At least we’re comfortable while we’re waiting for the drop. No blisters here.

Bury me in Birkenstocks

Unisex, universal, and so full-circle elementary-school-art-teacher crunchy that they’re somehow the dopest, Birkenstocks are a staple of the sandal world that not only go with everything, they make the look.

Easily slid on or tossed off, they’re the ultimate low-effort shoe for beachin’, barbecuin’, drinkin’ lambrusco in the park, or cruisin’ to the grocery store in a bathrobe like The Dude. We love that their timeless styles are all unisex (available in both men’s and women’s sizing) and that their aggressively neutral colors go with any and all sock picks. Bless you, Birks.

The best socks to pair with your Birks

When it comes to socks ‘n’ sandals, you can never go wrong with some immaculately clean (or even slightly linty, which is its own vibe) thick, white, athletic crew socks. These Gold Toe guys have 4.5/5 stars from nearly 38,000 solid ratings. The weird yellow toe sticking out of the end of your Birk is so deeply #norm.

If you want the white-sock look but a little something special, pair legacy brand with legacy brand and match up your Birks with some Carhartt Work in Progress embroidered logo socks.

And if you really wanna get the message across that you’re a chiller who’s full of sunshine and all outta fucks to give, these “No Problemo” socks will absolutely do the trick.

Take these Timberlands on a hike… to the art show

Throw some skater socks under these chunky, outdoorsy, touch-strap calf-leather men’s sandals from Timberland and you’re suddenly a Dimes Square influencer. (For women’s Timbs, the Croc Malibus, with their cushioned foam bed and high-traction soles, are positively *chef’s kiss*.)

Pair them with Walter Van Beirendonck’s eye-catching socks, which look like the stuff we doodled in the margins of of our ninth-grade notebooks.

If you’re looking for a more subtle hippie energy, ya can’t go wrong with tie dye. It’s a neutral now.

Slides: the chillest of sandals

Step right into ‘em, kick ‘em off. An easier shoe there never was. These cozy denim slides say, “I’m gonna grab a fish taco, then I’ll meet you back in the surf.”

And if you’re in the mood to super-coordinate (head-to-toe monochromatic vibes are in, my dude), go for these modern bandana Sacai socks to swaddle your feet. Chafing? Never heard of it.

Clarks are known for being super-comfy; that’s kind of their whole thing. With that in mind, we dub these sandals the Official Shoe of Grill Dads Everywhere this summer. You don’t have to have kids. You don’t even really have to have a grill. You’ve just got to be down to crack open a cold one, wear a perfectly broken-in ball cap, and call everyone “sport.”

When it comes to sock pairing, you’re gonna want to go for contrast. Sometimes, in life, unusual pairings can project dominance, a sense of irrepressible confidence that you know what you’re doing. For that reason, we recommend a combo of Clarks with either fancy Burberry check socks…

…Or, some unapologetically Fieri-esque Vans crew socks that don’t shy away from an early 00s mall punk aesthetic.

For all your tide poolin’ and Tinder datin’ needs

Holy shit… What’s that line from Romeo and Juliet? “For I ne’er saw true beauty till this night?” That’s for sure the mood upon witnessing these multicolored Tevas in muddy jewel tones straight out of a 1994 crayon box. Each and every color option is certainly inspired, but this look… [faints in ecstasy].

You can’t improve upon perfection, but you can push your Teevs over the age of tasteful sexiness with leopard-print socks.

If we’re going all-in on normcore, that means we need to bow to Crocs. They’ve been here all along, doing their thing, as so many of us have responded with confusion, hatred, and ceremonial stoning at the village square. In actuality, they are lords of happy feet, and they never really cared what we thought, anyway.

Pair with Supreme socks, just to be a jerk.

Who needs a pedicure?

Oh yes, it’s ladies’ night. Of course, all sandals are all-gender if you’re not a coward. There’s much to love Chiara Ferragni’s big, chunky leather logo sandals, but it’s hard not to have a soft spot for these fluffy, frivolous hot-pink slides, which murmur, “I barely made it out of bed today but here I am, darling.”

If spending $400 on furry florescent magenta sandals isn’t really doable for you this fine day, try these equally obnoxious UGG slingbacks that are on big-time sale:

…or these rose quartz shearling Birks, which are so comfy they’re like walking on… a sheep.

Pair with “no-show” socks, which will indeed be showing, because that’s how little you care. Being this effortless is, well, a bit of an effort in and of itself.

Or if you wanna lean into full kawaii, these kindercore sheer socks will do the trick, too.

The final boss of normcore

That’s right folks—the Bowser’s castle of dressing like a ponytailed guy working at a plant nursery in 1997. I’m talking, of course, about Dockers. They’re stitching-heavy. They’re strappy. They’re an advanced normcore sandal that can only be effectively executed as “normcore” (and not just “unwillingly clueless”) if you also have stick ‘n’ poke tattoos and an impressive collection of vintage T-shirts that you plan to eventually sell to put your kids through college. We believe in you!

Of course, there is only one correct answer in terms of what to pair them with: Grateful Dead socks.

You hate this article, and also yourself

That’s cool. We even have something for you!

The Rec Room staff independently selected all of the stuff featured in this story. VICE may receive a small commission if you buy through the links on our site.