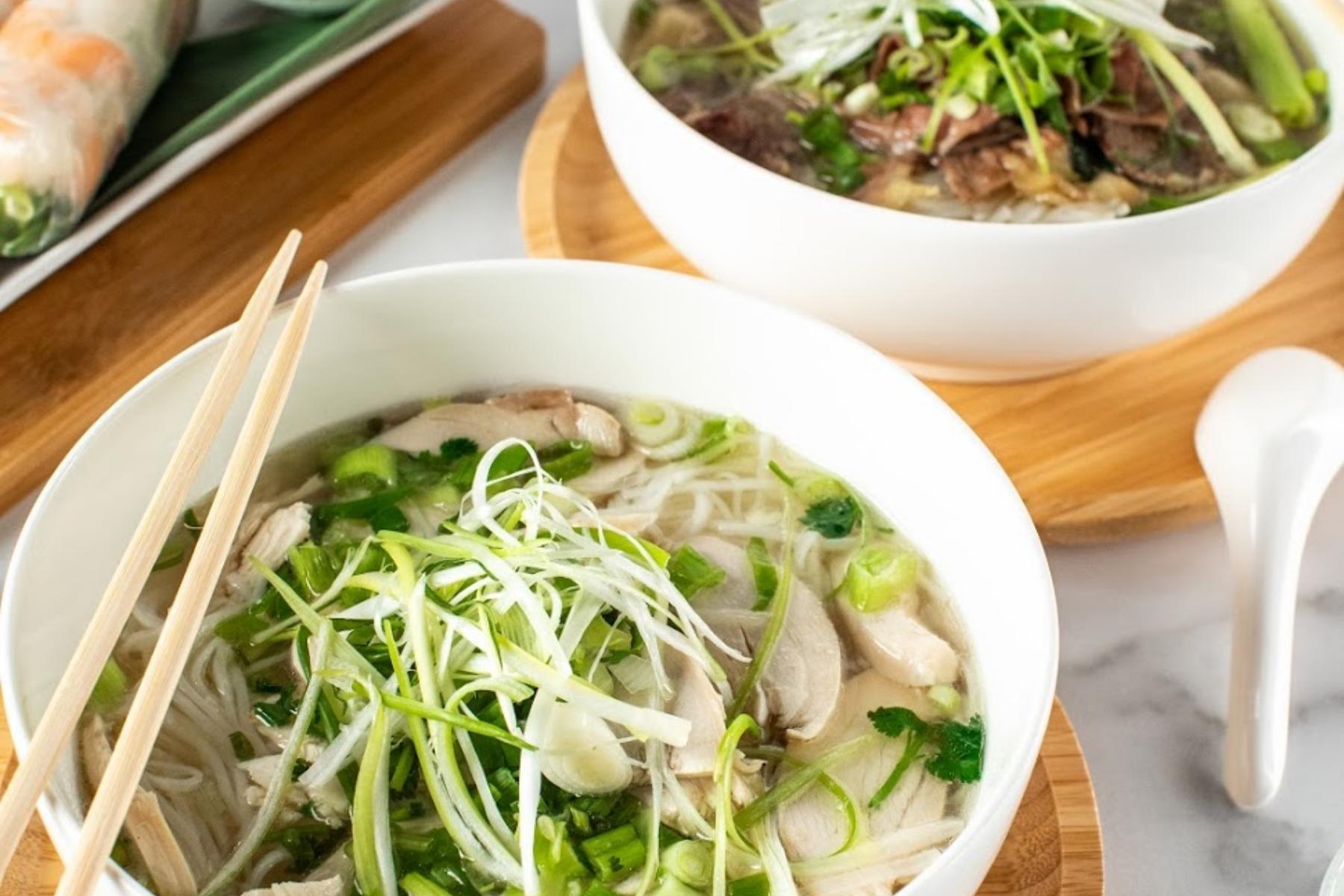 There are many hangover remedy claims. Detox green juice? Wow, a perfect match for nausea. How about: Sleep in as long as you can. Sure, I’d love to! Eventually, though, I have to pry my body out of bed and provide it with some sort of sustenance.

Of course the best hangover cure wisdom is: you do you. But I can say with anecdotal certainty that a big bowl of steaming hot pho is the fastest route from point “I need to sleep for 12 hours” to “Yeah, I could go for run at White Rock Lake.”

The sheer liquid replenishment alone is enough to lift me out of my morning grog. Ngon Vietnamese Kitchen is my personal go-to. It’s close. It’s bang-on delicious every time. It’s…close. That’s pretty much the criteria. At Carol Nguyen’s restaurant, she serves a North Vietnamese-style pho—hoison and herbs and extra hot sauce need not apply. “At Ngon, we don’t serve with hoison sauce unless customers ask for it,” says Nguyen. Her pho is flavorful from the first sip. “Try the soup before you decide to put more hoison sauce on,” she implores, “because if you add hoison sauce to our pho, you hurt my feelings for real.”

In the outer perimeter of Dallas, there is much incredible pho to plunge your face into. Don’t sleep on Pho Midway, located at the intersection of Midway and Trinity Mills. There’s a deluxe pho bowl filled with all of the meats (sliced rare beef brisket, flank steak, tendon, beef balls). There are vegetable and tofu ones, too, though the broth isn’t strictly vegetarian. For something brothy that’s not pho, I like hu tieu with egg noodles.

…if you add hoison sauce to our pho, you hurt my feelings for real.

With 16 different iterations of the rice noodle soup, the offerings at Pho 544 in Arlington are unmatched. Pho ga with dark chicken meat, fatty brisket pho chin, vegetarian-approved pho chay—there’s a pho for everyone and every mood. And you will like every drop. I’d be at Pho 544 for pho, and any other dish on the sizable menu, if my gas tank allowed it.

Another Arlington spot, Phuong & Food, serves up just a few types: oxtail, rare steak and meatballs, option to add tendon to the former. Meanwhile in Lewisville, Pho One has pho aplenty, but the wonton noodle soup smacks of flavor.

If you’re at a bar and want to employ some hangover preventative measures—which, if so, then bravo, you genius—you’ll want to find yourself at Atlas in Bishop Arts or Cosmo’s in Lakewood. These two Dallas bars go beyond small bites. Dan Bui, who runs Atlas and has years of experience in the kitchen, has created a concise bar menu. On it, find his dialed-in pho: brisket, simple, hits the spot. Cosmo’s owner Jackson Tran likewise uses a family recipe for his beef pho packed with sliced ribeye, brisket, and meatballs. For fans of the extra unctuous, get a bowl of oxtail pho when it’s available.

I’m telling you, pho is the answer. Still, there is the old wives’ tale about the hair of the dog, which science says there’s a dram of truth to: more alcohol might dampen hangover symptoms. All that to say, get a bloody mary. AllGood Cafe, in my opinion, can do no wrong. The bloody mary there is the Goldilocks of its ilk: great tomato-y bite, not too spicy, but not boring either. Ten Bells Tavern falls into that same category of faultless morning fare. And it will move from its current location into new digs after the end of January, so get there ASAP. Four dollar bloody marys and chicken fried steak topped with fried eggs await! At Tulum, bloody marys can come made with bright green tomatillo juice. We’re big fans.

Rosin Saez is the online dining editor for D Magazine‘s food blog SideDish. She hails from Seattle, Washington, where she…