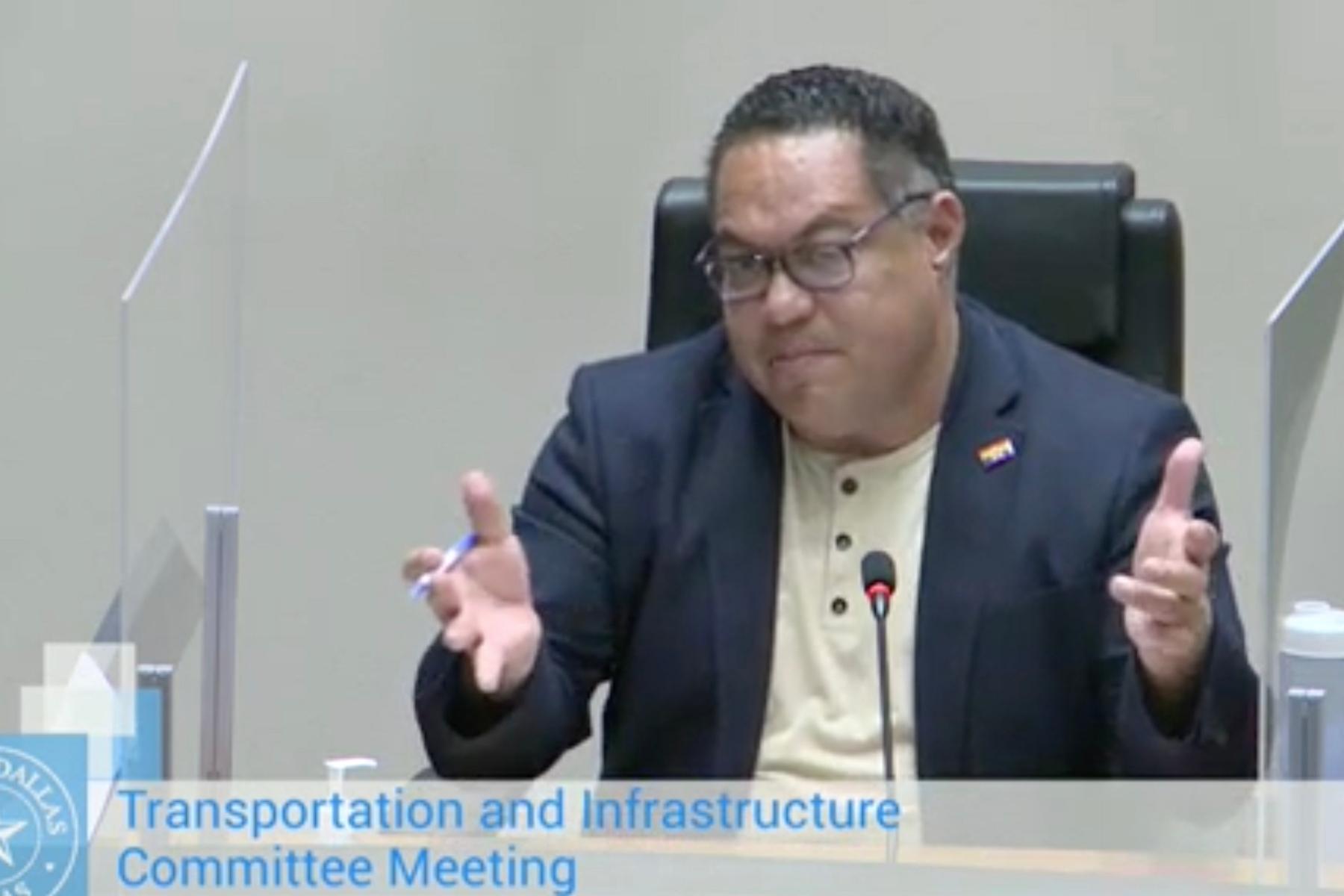 Our Matt Goodman reported Monday on a recent meeting of the city’s Transportation Committee. As FrontBurnervians have come to expect from Matt, his post about the future of I-345 was measured and fair and well-reported. He quoted council members on the committee as they struggled with the complicated subject of what to do with the 1.7-mile elevated highway, and he got feedback from outside folks such as the director of The Congress for the New Urbanism.

But there was one issue with Matt’s report: when it came to talking about how much delay in traffic would be created by replacing the highway with a boulevard, after reporting that a TxDOT engineer said a boulevard would add 40 to 50 percent to travel times in the corridor, Matt cited urban designer Patrick Kennedy’s competing conclusion, writing: “It would actually be about a five-minute delay.”

At which point I took to Twitter and said, “The city of Dallas is about to piss its future away to save 5 minutes of drive time.” Then I tweeted a thread along the same lines, saying the city was “bending the knee to TxDOT,” even bringing up the ghost of Wick Allison in the process. Man, I was heated.

This post is a mea culpa. I need to correct some inaccurate information that I helped spread.

Let’s address that five minutes. It came from Patrick. To be transparent, I consider him a friend. I’ve never been to his house, but we follow the same Premier League team, and I’ve watched a match or three with him. He’s a member of the DART board, and he’s smarter than I am. Which is one reason I totally jumped onboard with the math he published Monday on Medium. (Mark Lamster published a similarly misleading figure in the Morning News on June 9, saying a boulevard would create a three-minute daily delay.)

Here’s how the math broke down: TxDOT says that turning 345 into a boulevard would create an additional 19,000 hours of daily traffic. So Patrick looked at the projections for the year 2045, when 206,000 cars are expected to drive the corridor every day. (There are reasons to give that projection side eye; I’m ignoring that for now.) If you multiply 19,000 hours by 60 minutes and divide by 206,000 cars, then you get about 5.5 minutes per car per day.

That’s the number that sent me to Twitter, the wonderful medium for calmly and cogently expressing complex ideas. Because why the ever-loving hell would we give two shiatsu massages about five minutes in traffic if it meant we could build a boulevard, which is not only the cheapest option but would free up more land than the other options, which means more development, more jobs, more taxable value—more life?

Yeah, the math is wrong. Or the math is right but it doesn’t accurately describe the real world.

Wednesday I got two TxDOT engineers in a Zoom call, Mo Bur and Ceason Clemens. They were patient with me. They explained that you can’t spread those 19,000 hours evenly across all those cars, because the cars aren’t spread evenly throughout the day. Ninety seconds into the call, I was apologizing for stupidly not grasping that concept when I first saw the math. Obviously rush-hour drivers will bear the brunt of those 19,000 hours. Here’s a TxDOT slide for you:

TxDOT says that if we replace 345 with a boulevard (what the agency terms “removal”), drivers during peak hours traveling between the north and south central zones shown above will experience a 31 to 40 percent increase in travel time in the morning and a 41 to 50 percent increase in the evening. You can watch TxDOT’s entire May 24 presentation on the options for dealing with 345 right here; the stuff on travel times for the various options and various zones of town begins on slide 20, at about the 11:20 mark.

Now, do I buy what TxDOT is telling us in that slide above? Hell no. I’m writing this post at 4:20 p.m. on a Thursday. According to Google Maps, right now the trip from the Cooper Institute, in the north zone, to UNT’s Dallas campus, in the south central zone, would take 43 minutes. AND Google wants me to take the Tollway and 35E, avoiding 345 entirely.

OK, OK, tolls are expensive. Google says taking Central Expressway through downtown, then driving I-45 to I-20 will slow me down by nine minutes. Let’s say I drive the cheaper, slower route, which would take 52 minutes. No way does it feel that the trip will take 16 to 20 minutes longer if 345 were a boulevard.

At this point, you should be asking yourself, “Why should I trust Tim’s feeling? That’s crazy. He’s so dumb that he and his Tottenham-loving buddy Patrick screwed up that thing about the five minutes.”

That’s fair. In response, I’m not going to drag you through how TxDOT designed the boulevard option without doing some obvious stuff to improve north-south connections, stuff that would reduce the traffic delays they predicted. It’s complicated. It takes too long.

Instead, I’m going to point you to real-world examples. Just look at other cities that have turned highways into smaller roads and paid more attention to people than cars. Read this story from the Lincoln Institute of Land Policy. Read this New York Times story. Or just watch this short Grist video:

One more real-world example: about 5 miles south of I-345, TxDOT is ripping out S.M. Wright Freeway. Here’s what the agency says on its own website: “The project transforms the existing S.M. Wright Freeway into a six-lane, street level boulevard with traffic signals. Freeway overpasses will be removed, and the boulevard will include landscaping and sidewalks. The new S.M. Wright Parkway will feature enhanced community gateways to help promote neighborhood identity and local connections, while also helping spur community investment, development, and rejuvenation.”

Yeah, that sounds good. Let’s do that. (And, yes, I realize this comparison isn’t perfect, given I-45’s proximity to S.M. Wright.)

An apology with a “yeah but” is often worthless, and it can sometimes serve only to alienate the aggrieved. I hope that’s not what I’ve done here. I really am sorry about screwing up the five-minute-delay detail.

This is a big, hairy, complicated undertaking. Whatever we do with 345 will have huge impacts on how our city grows or doesn’t. It would be nice if our daily paper had a full-time transportation writer with the expertise to educate us all as we stumble toward our future. Without that, you’re pretty much stuck with us. We’ll keep working at it.