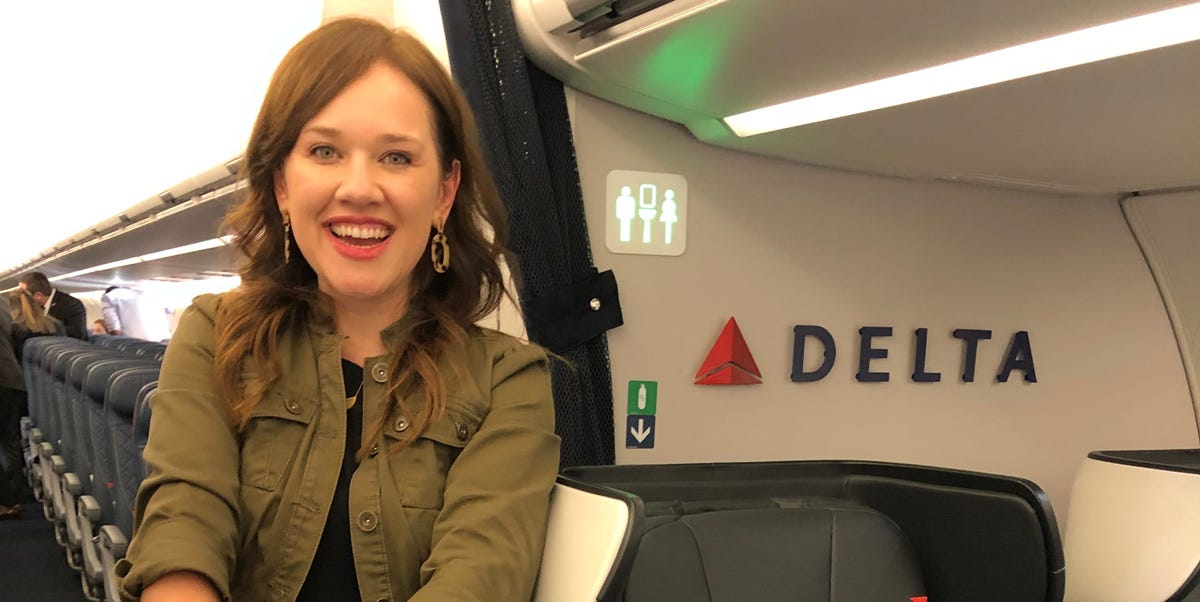 Delta's adding a new, more comfortable and sustainable airplane in its fleet: The Airbus A321neo, which has 194 seats and 20% better fuel efficiency than Delta's current A321ceos.

"Neo" stands for "new engine option," and Delta plans to purchase a total of 155 Airbus 321neos through 2027.
The new planes include markedly upgraded domestic first-class seats, featuring memory-foam cushioning, winged seat backs for more privacy, and a smart new storage configuration.
Delta representatives told Insider the sleek new seats were designed over five years of testing and customer input.
A321neo flights began departing from Delta's hub at Boston Logan International, bound for San Francisco, on May 20. They'll debut on existing flights to Seattle on August 11. Other planned transcontinental routes include Boston to San Diego and Denver.
I flew on Delta's new state-of-the-art A321neo in the upgraded first-class cabin before it launched to the general public. Here's what it was like.
I checked in for my flight on the Fly Delta app. I wasn't checking a bag for my quick trip from Atlanta to Boston, but the Delta counter usually makes the bag-drop process quick.
I used my Fly Delta app to get through security, but printing a physical boarding pass is simple at Delta's automated kiosks. On the Wednesday I flew, the area was practically empty.
Hartsfield-Jackson Atlanta International Airport — known as ATL — is the world's busiest airport. The Plane Train is the simplest way to navigate between its seven concourses.

After breezing through security thanks to TSA PreCheck, I boarded the Plane Train to take me to the “T” gates, where Delta’s new Airbus 321neo would depart.
Hartsfield-Jackson Atlanta International is increasingly busy as passengers ramp up their travel schedules. However, on this Wednesday at noon, the T gates were uncrowded.
I had a voucher for access to the Delta Sky Club near my gate. With a few minutes to spare before boarding the plane, I stopped in for a snack.
The Delta Sky Club on Atlanta's T gates featured a variety of original art installations to add to the visual interest.
The day I visited, the Delta Sky Club featured a station with a chef preparing a refreshing smoothie with frozen acai berries, fresh pineapple, orange juice, and cantaloupe.
The Sky Club has multiple self-serve Eversys espresso machines, which I used to make myself a pre-flight cappuccino.
I picked up a few complimentary magazines from the Sky Club to read on my journey. The flight I joined was to reposition Delta's new A321neo plane from Atlanta, where Delta's headquarters is, to Boston, where it would depart on its first public flight on Friday.
Friendly Delta flight attendants, outfitted in their signature uniforms designed by Zac Posen, welcomed me to the flight.
I had 3A and B all to myself for this flight, and the upgrades to the first-class seats were apparent immediately. The roomy seats feature "wings" on the seat back to provide additional privacy from your first-class neighbor.
The bookshelf-style overhead bins are 25% larger, so they had no problem accommodating the luggage I brought onboard.
The smartly designed personal storage for first class accommodates everything you'd want to have at your fingertips for a lengthy domestic flight: laptop, notebook, e-reader, and more.
Earlier this year, Delta announced its partnership with Mexico-based company Someone Somewhere, which employs artisans (75% of whom are women) in Oaxaca and Michoacán, to create their first-class amenity kits.

This one included a Someone Somewhere eye mask, Humble Co. bamboo toothbrush and toothpaste, and Grown Alchemist lip balm and lotion. (These kits aren't available for domestic first class, but they were given to us as samples of what's available for Delta One passengers on international flights.)
The ambient ceiling lighting adds elegance and visual interest to the cabin interior.
Each first-class seat back has a 13-inch high-definition monitor for on-demand inflight entertainment.
Though the flight from Atlanta to Boston was only approximately two hours and 20 minutes, I had fun perusing Delta Studio's selection of more than 500 movies, as well as live TV, television series episodes, podcasts, and more.
While I couldn't see it, I learned that all A321s (along with many other Delta aircraft) are equipped with state-of-the-art air-circulation systems.
According to Delta, they blend "outside air sterilized with a high-temperature compressor and ozone purifier with existing cabin air that has been recirculated through an industrial-grade HEPA filter."
It's nice for peace of mind for anyone who's nervous about staying healthy while in the air.
The quilted seat backs and headrests in first class are outfitted with memory foam, and I noticed the upgrade immediately. It's firm and plush at the same time. The new first-class seats are 21 inches wide and feature 37 inches of pitch.
No matter how organized I intend to be, it seems I'm always misplacing my phone on a flight. The smart new storage and charging plugs are positioned right beside the first-class seats in the A321neo, so losing track of your device or charging cables won't be an issue.
The new Airbus A321neo is powered by a Pratt & Whitney GTF engine that's noticeably quieter than the A321ceo, making it even easier to hear crew announcements.
The new A321neo also features Delta's fastest wifi connection, ideal for getting some work done in the air.
Though the seats in the rest of the plane didn't get the same major overhaul the A321neo's first class did, all of the new plane's seats now feature memory foam.
First class has a 22- by 10-inch bi-fold tray to comfortably hold my computer. Plus, high-speed wifi is $5 for the entire flight.
I managed to knock out some work during the short flight from Atlanta to Boston. The bi-fold tray was big enough to hold my 13-inch MacBook Pro, a drink, and a snack at the same time.
The miniature drink tray in between seats and the seat-adjacent water bottle holder made me feel like I had plenty of room to spread out and create a true workspace.
The seat backs have a small ledge (covered in leather, for extra grip) that's perfect for setting a phone or other item. I was struck by how it seemed no space, no matter how small, was wasted in the new first class design.
Flight attendants offered a selection of snacks before meal service.
Snack offerings included Italian Cubetti dark-chocolate wafer cookies, Albanese gourmet gummy bears, Miss Vickie's kettle chips, and honey-roasted pistachios by Wonderful.
For in-flight snack and meal service, a cloth napkin covered the bi-fold tray table.
For lunch, I chose an Impossible burger topped with manchego cheese and caramelized onions, served with a spiced butternut squash salad and lemon-blueberry cheesecake. The meal was one of three options available.
The plant-based burger turned out to be just the right blend of somewhat healthy and decadent. The airline brought back food service, much of which was paused during the pandemic, to first class two months ago.

Rather than focusing on celebrity-chef partnerships, Managing Director of Brand Experience Mauricio Parise told me that the airline is working with local caterers in their markets who have a high attention to detail for ingredients and finished dishes.
Delta serves canned cocktails, such as margaritas, by Atlanta-based Tip Top Proper. Each can is just 100 milliliters, but they pack a powerful punch thanks to 26% ABV.
The new first-class recliners have 5 inches of recline and a height-adjustable headrest that folds in to cradle your head. I managed to close my eyes for a few minutes.
The one disappointing thing is that the footrest doesn't move, so for a transcontinental flight such as the six-hour one from Boston to San Francisco, it might be hard to truly sleep.
I appreciated the conveniently positioned ports — right next to my seat — so I never had to fumble to charge my phone. The charging stations have both plugs and USB ports.
The oversize monitors also angle so that if the person in front of you reclines, you can still comfortably view your show or movie.
The flight passed quickly. Before I knew it, we were descending into Boston's Logan International Airport. Overall, I was impressed with the thoughtful upgrades to first class on Delta's new A321neo planes.
Though it’s initially intended for longer flights than the one I took, I can envision being quite comfortable in one of these roomy seats flying across the United States.
Read the original article on Business Insider