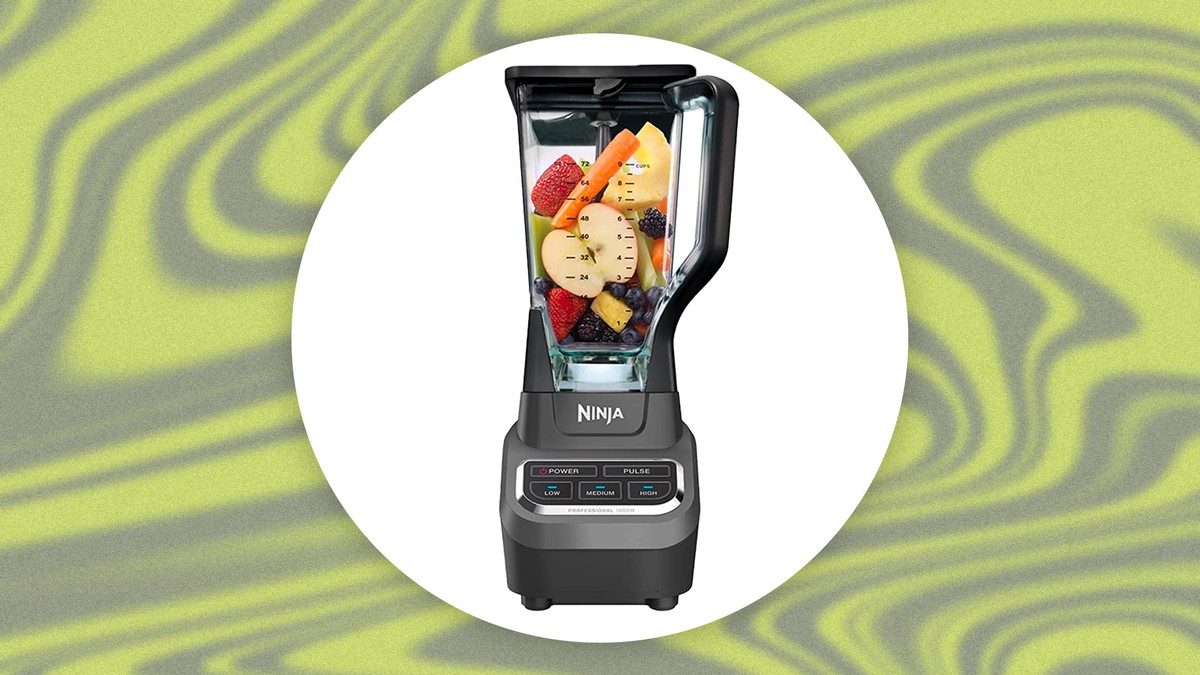 When it comes to fancy blenders, the brand that reigns supreme, undoubtedly, is the almighty Vitamix. Chefs love them, home cooks love them, and smoothie-heads love them—but no lie, they can be pretty pricey. Even when they’re on sale, you’d be hard-pressed to snag one for under 250 bucks—and the high-end models can go for as much as $700 (or more with accessory bundles).

Pssst…let me tell you a little secret. Vitamix blenders may be incredible, but you can get the same super-charged blending power for way less money. In fact, speaking from experience as someone who used a Vitamix for years, I can confidently say that in my experience, Ninja’s line of Professional Plus blenders does the same job—or maybe even outperforms the Vitamix in some ways—for a fraction of the price. Yes, you heard me—Ninja’s $100 blender, which is currently on sale for $89 on Amazon, and is not even the brand’s top-of-the-line model, outperforms my gigantic, noisy $700 Vitamix in several ways.

Listen, if you already own a Vitamix, I’m not saying you should kick yourself—I love my Vitamix. When I use it to merge my smoothie ingredients in seconds, I feel like an epic health goddess, mixing all my potions and powders into its towering bowl. It does feel luxurious—its heft alone is enough to make it feel high-quality and powerful. Making a $14 smoothie at home makes me feel elite, but ultimately, Vitamix blenders aren’t the only ones out there that function at an industrial level.

When I started planning a move to a new apartment, I realized that I would have to leave my Vitamix behind (long story), and started the process of hunting for a substitute. When I came across the Ninja BL610, I was impressed by not only its sexy, Vitamix-y looks, but also by its super-high rating on Amazon. Clearly, this was a popular blender for a reason—and I soon came to find that it does the exact same job as its much more spensi cousin, with a few features that I actually like better.

Let’s get into the nitty gritty—the Vitamix model that I’d been using, the A3500 from the Ascent Series, costs $700, and the Ninja BL610 retails for about $100—although right now, it’s on sale for $89.95. But even with the major difference in price tag, I had to put it to the test without pulling any punches to see if it could really compete with the GOAT of fancy blenders. Here’s how it went.

The Ninja boasts 1,000 watts of power to pulverize your ingredients, versus the Vitamix’s 1,500—but while the Vitamix may have more oomph on paper, I didn’t notice a big difference in performance, aside from ice crushing, and in that instance, the Ninja absolutely destroyed the Vitamix. If snow cones (or frozen drinks) are your main motivation for seeking out a powerful blender, I’d say def pick the Ninja. Both the Vitamix and the Ninja claim to have intelligent technology to intuitively figure out what setting is best for the fruits and veggies you’re blending. While the BL610 doesn’t have quite the same breadth of choices the Vitamix does, the automatic smoothie button delivered the exact same consistency, within the same amount of time. The Vitamix has more control options, but in practical terms, most users will probably end up sticking with the same few, so that’s not necessarily a huge plus. I used the automatic smoothie button on the Ninja, and it performed identically to the Vitamix’s smart buttons. When I made soup in my Ninja, it also came out creamy and lump-free.

The Ninja has a rod in the middle with extra blades, which helps with processing larger or harder to break down ingredients, whereas the Vitamix comes with a tamper and has a removable plug at the top so you can add more ingredients, or push them down towards the blade. I will say the one thing I did miss is the ease of adding in a bit more liquid via the convenient hole in the Vitamix lid. Still, I ultimately much prefer the design behind the Ninja’s lid because it features a locking handle that ensures the lid is in place (no smoothies on the ceiling, please) and easily unlocks with the press of a button. I also love how the pitcher locks into the base—it’s an easy click-motion that lets you know if it’s secure.

If you’re big into accessories, the Ninja has fewer offerings than the Vitamix. Sure, I love making single-serving smoothies with my Vitamix’s “self-detecting” base, which automatically detects which accessory you’re using, but deciding what setting to use on the Ninja feels intuitive enough. You put stuff in, press a button and then sometimes, based on what’s inside, you press it again. I will tell you that the gasket on the inverted Vitamix accessories is nearly impossible to open, and occasionally requires leveraging your entire body weight to open, so sometimes, as they say, less truly is more.

Sure, it’s powerful, but the people who tell you their Vitamix is quiet are lying. It is so unbearably loud that I’m grateful I desensitized my dog to it as a puppy. The Ninja on the other hand, was practically whispering by comparison. Sure, it still makes noise, but you can carry on a conversation in the background, which can’t be said about its industrious competitor.

Only (relatively minor) thing about the Vitamix that is truly “superior” is the automatic self-cleaning button. It’s a great feature, but I’ve only used it a handful of times because I’m lazy and would rather just throw the bowl in the dishwasher. Ninja, on the other hand, knows that you’re a lazy POS like me, and just instructs you to put it in the washer, because all of the attachments are dishwasher-safe and BPA-free. If you have a dishwasher, you’re good; if not, this may end up being a bit of a hassle if you aren’t a fan of handwashing and using those long-handled scrubbing brushes.

If you plan on doing a ton of cooking, food-processing, juicing, etc. in your device, it very well might justify the Vitamix’s steep price tag. But if you don’t care about name brands or “status appliances”, and you’ll mostly be making smoothies and soups, you can still achieve excellent performance for much, much less money thanks to the Ninja.

The Ninja BL610 blends just as quickly and smoothly as a Vitamix, is noticeably quieter, and has some well-thought-out design features that the Vitamix doesn’t. While I’ve only been using the Ninja for a few days, so far, it is practically outperforming my old Vitamix. So if your needs are on par with a Jamba Juice, sure—spring for the Maserati of blenders. But if you want something that simply works without a ton of bells and whistles, I cannot recommend the Ninja BL610 enough.

The Ninja BL610 blender is available at Amazon.