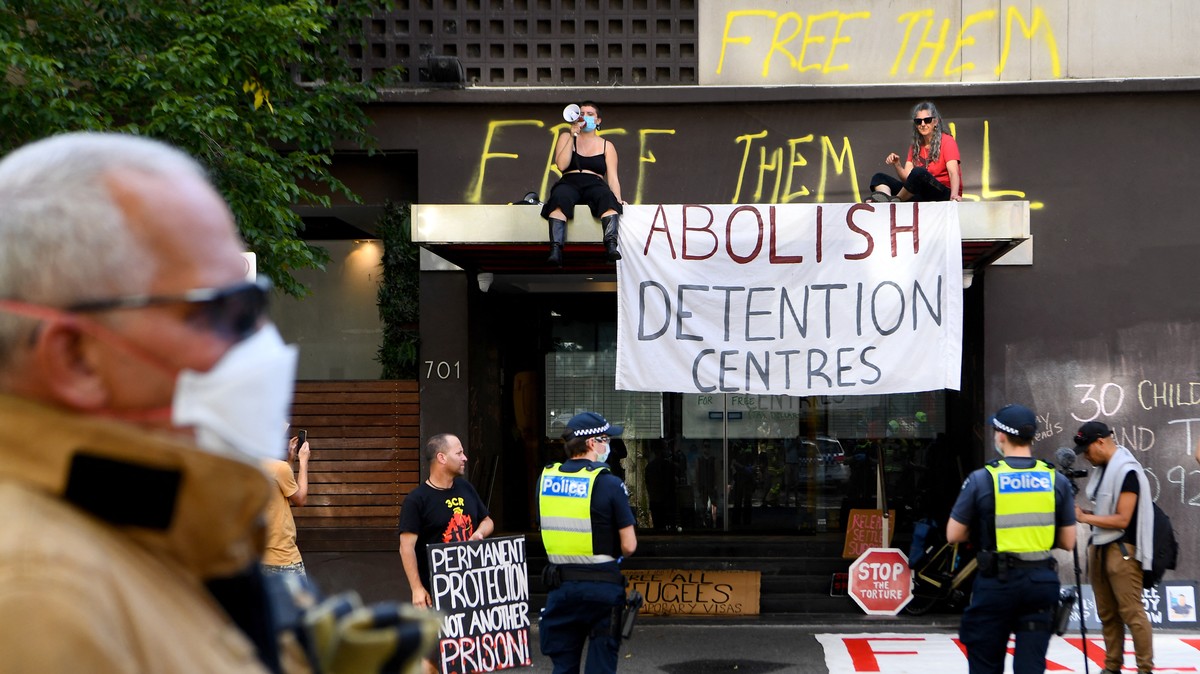 Until this week, the nondescript hotel in Melbourne to which Mehdi and his 35-odd neighbours are confined was of little international interest. The plight of the men inside—refugees and asylum seekers, many of whom have been locked up in the makeshift prison for months—could hardly be known from the outside looking in.

Then, on Thursday afternoon, a sudden influx of protesters, police and journalists began to fill nearby streets. The road outside the Park Hotel became crowded with activists, but many of the people waving banners and placards weren’t advocating for the rights of the refugees and asylum seekers. Instead, they were calling for the release of the world men’s number one tennis player, Novak Djokovic, who was brought to the hotel after border officials revoked his visa over vaccine requirements.

“​​When I woke up in the morning and people were asking ‘Is Djokovic at the Park Hotel?’ I was like ‘What? Are you crazy?’” Mehdi, who for his own protection prefers to go by just one name, told VICE World News from the hotel. “Imagine Djokovic here eating our food—they can’t feed him this shit. I thought that even if they sent him somewhere they would send him to a penthouse or a fancy hotel.”

“Then eventually it came through: Djokovic is here, being detained with me. The best tennis player of all time.”

Some protesters waved Serbian flags and danced for the news cameras as they demanded that Djokovic be set free from his temporary detention, accusing the Australian government of hard-fisted overreach. Others who came out to condemn the perceived mistreatment of the 34-year-old, 20-time grand slam winner discovered, upon arrival, the plight of the several dozen refugees trapped inside, Mehdi among them.

“I feel so ignorant. I came here for [Djokovic], and find out they’ve been locked up nine years,” one protester told a reporter from The Guardian. “It’s so wrong.”

Djokovic’s detention, and the political maelstrom surrounding it, has drawn international attention to the Park Hotel, and the unwanted spotlight is casting an unflattering glow on Australia’s great shame. Namely, its horrific mistreatment of refugees, who come to the country exercising their human right to seek asylum but are locked up by a government that is legally obliged to protect them.

Another protester outside the Park Hotel on Thursday who has been advocating for refugee rights since before the Djokovic saga told VICE World News that, as a result of the athlete being brought there, many people seemed to be hearing about the mistreatment of the other detainees for the very first time.

“This hotel is a COVID risk,” he said. “Refugees shouldn’t be detained there, I don’t think Djokovic should be detained there either, but I’m hoping the situation does shed a light on the plight of the refugees.”

By nightfall the street outside was filled with advocates and activists calling for the release of the refugees and asylum seekers, who stood in the windows of the hotel to watch the situation unfold. News crews and television cameras punctuated the throng. Mehdi’s phone lit up with enquiries from journalists: what are conditions like at the Park Hotel; what are they being fed? Generally speaking: what is Djokovic in for during his stay?

Less interesting, it seemed, was the actual suffering of the men who had been languishing there since mid-October, despite never being charged with a crime nor accused of any wrongdoing.

“Journalists are not even asking and don’t even care what I’ve been through,” said Mehdi. “I spoke to [one TV channel] and their whole report this morning—I watched it—they didn’t even mention us at all.”

It was mid-morning on Thursday, Jan. 6 when Djokovic was taken to the makeshift immigration detention center at the Park Hotel. The tennis star was stopped by border officials shortly after touching down in Australia on Wednesday night with a medical exemption to participate in the Australian Open—despite the tournament’s strict vaccine mandates and Djokovic’s refusal to reveal whether he is inoculated against COVID-19.

He was taken into questioning, had his visa rejected and was subsequently transported in the back of a van to the hotel, where he is now being quarantined until such time as his lawyers can appeal his impending deportation. It will be mid-morning on Monday, at the earliest, by the time Djokovic leaves—a total of more than 90 hours in government detention, unable to depart for any reason other than going back to where he came from.

But this is nothing. On the floor above him, in the same hotel, are about 50 men who have not been able to leave for nearly 90 days—some of whom have been in immigration detention for more than nine years.

Mehdi himself made the sea journey from Indonesia to Australia on Jul. 22, 2013—just three days after the Australian government announced a hard-line border policy that any asylum seekers who arrived by boat henceforth would have no chance of being settled in Australia as refugees.

He was 15 when he fled persecution in Ahvaz, a city in the southwest of Iran. After leaving the Indonesian capital Jakarta on a boat, he was stopped by Australian authorities and taken to an offshore processing facility on Christmas Island, an Australian territory just off the coast of Indonesia. After 90 days there he was taken to another detention camp in Nauru, an island nation which plays host to an Australian immigration facility, where he remained for more than six years before he was brought to Australia for medical treatment in 2019.

Since then he’s been cycled through a rotation of local immigration centres, including Melbourne’s Park Hotel, where he’s been kept since mid-October. On the day we speak it is his 24th birthday. He has spent more than 3,090 days in detention, and has been given no indication of when he might be released.

Survival has not been easy. Conditions in Australia’s processing facility in Nauru have been described as “prison-like” by refugees and asylum seekers, and “cruel in the extreme” by Amnesty International’s senior director for research Anna Neistat. She pointed out that “few other countries [besides Australia] go to such lengths to deliberately inflict suffering on people seeking safety and freedom.”

Neither safety nor freedom has been guaranteed at the Park Hotel either, which has been ravaged by COVID-19 outbreaks and described by staff and detainees as an ​​“incubator” for the virus. The hotel rooms’ windows have been drilled shut to keep detainees inside. Shortly before Christmas, part of the Hotel caught fire and days later, detainees complained that they were being served food containing maggots and mould.

“It’s a cage,” said Mehdi. “You’re surrounded by walls. You cannot get out of here.”

Unlike Djokovic, these men came not by plane but by boat; they came not to play sport but to flee persecution; and they don’t have the option of a safe home country to return to.

“Mr Djokovic is not being held captive in Australia,” Home Affairs Minister Karen Andrews said on Friday, pointing out that there is nothing to stop the professional athlete from exiting the country if he decides not to pursue his case. “He is free to leave at any time that he chooses to do so and Border Force will actually facilitate that.”

Meanwhile, men like Mehdi wait anxiously for the same opportunity to resume their lives—a day they fear will never come.

Mehdi spends his days in an excruciating limbo; suspended in purgatory between hope and despair, resilient optimism and crushing disappointment. Over the last nine years his future has been sporadically brightened with the prospect of his release—rumours, news reports, other refugees being resettled in places like Australia, New Zealand and the United States. But every time his hopes have been dashed.

Most of the refugees who have been with Mehdi, he says, are dealing with suicidal thoughts. In 2016, one of them burned to death after dousing his body in petrol and setting fire to himself in protest of the brutal conditions refugees were forced to endure on Nauru. Mehdi has been diagnosed with post-traumatic stress disorder and insomnia. He kills the interminable hours by reading, playing guitar, taking a walk or smoking a cigarette on the roof. Anything to swallow up the time.

“I have to come up with methods for my survival, for each different period of time,” he explained. “We’re not surviving anymore. We used to survive, but right now we’re trying to survive. That’s the only option we’ve got.”

Asked about refugee treatment that has suddenly made headlines, Andrews defended the government and said that those in Park Hotel don’t have a valid visa or have arrived in Australia illegally “for a number of reasons.”

“We treat all people who are in immigration detention fairly [and] equitably,” she told the ABC in a television interview. When asked what message the situation sends to the world, she said “That Australia has very strong border policies, it has done [so] for many years … and we will make sure that entry to Australia meets the requirements that we have established.”

Yet Mehdi is hopeful that some good may come of Djokovic’s detention, and the visibility it’s getting on the international stage—even if he has little faith in the media. His hope, he says, is that when the world’s number one tennis player emerges from his 90-plus hours in the prison-like Park Hotel, he will use his platform to draw attention to his neighbours.

“My message to Djokovic is this… You’ve been detained [the same] as me for a day, two days, three days, and you experienced for such a short period of time how it feels,” he said.

“Some people are being held in this hotel for years; in these rooms for years; eating the foods that you ate for years. They’ve got no access to fresh air for years. They are surrounded by walls for years. And I hope you take action, you speak about us, you raise awareness. Because you have a voice.”