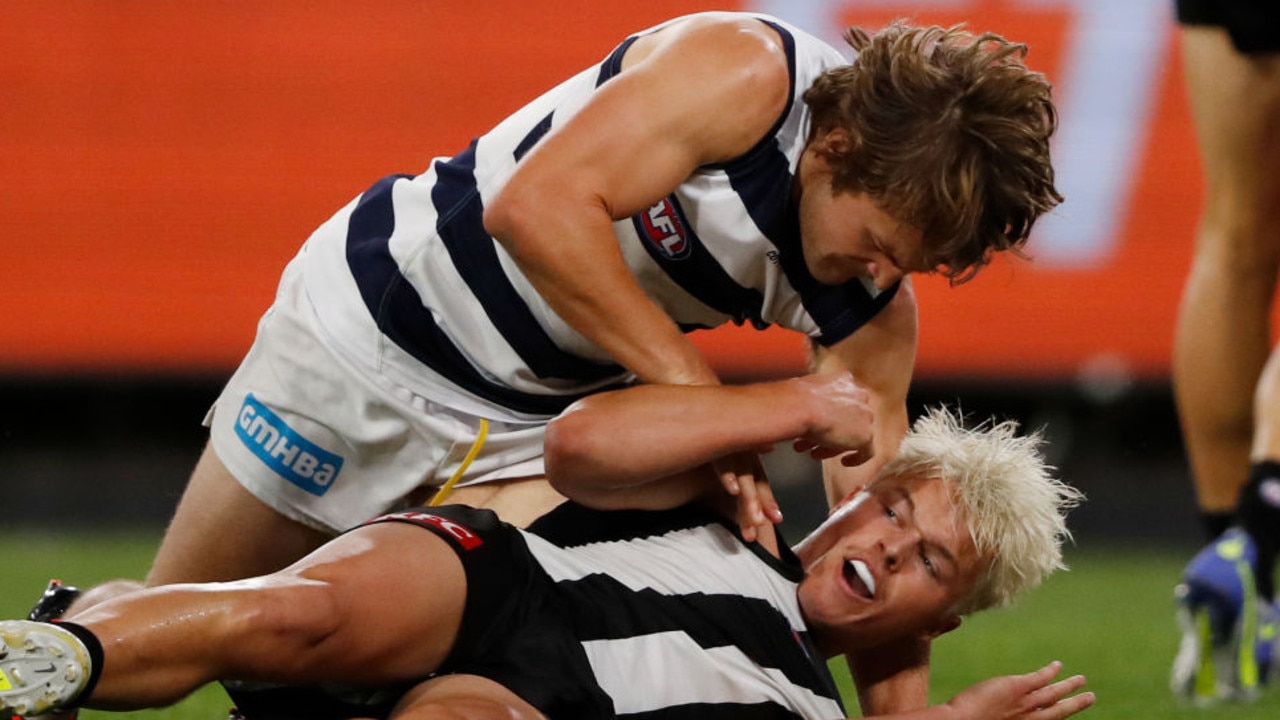 Collingwood youngster Jack Ginnivan was again in the spotlight in the club’s 13-point loss to Geelong on Saturday night.

The Cats stormed home from 30 points down at three-quarter time to oust the Magpies in Joel Selwood’s 227th game as skipper — breaking the all-time VFL/AFL record.

And eighth gamer Ginnivan, donning a bold new bleached blonde hair look, wasn’t afraid to take it up to Selwood during the contest, getting under the skin of the Geelong veteran and his teammates at times.

None more so than after young Magpie Ollie Henry’s chase down tackle on Selwood in the third quarter, where Ginnivan drew a crucial double free kick after Tom Atkins took him to the ground, sparking an all-brawl but critically resulting in two Collingwood goals.

However the Cats got the last laugh in the end, while Selwood was instrumental in the fourth quarter in helping lift his side to victory.

Port Adelaide great Kane Cornes, who previously criticised Ginnivan for over celebrating in GoPro footage after Collingwood’s Round 1 win over St Kilda, was quick to have a dig at the Magpies after the game on social media.

“To be honest I don’t care if he’s got pink hair as long he keeps playing his role, putting pressure on, getting under the opposition’s skin. There’s a role for that within the rules,” he told reporters.

“He’s only played six or seven games now so he’s finding out now what best suits him to play at this level.

“I like what he‘s bringing to the table right now.”

Cornes told AFL Media’s The Round So Far he wasn’t a fan of Ginnivan’s antics on Friday night in antagonising a player of Selwood’s ilk, calling for the youngster to first build up his reputation.

“It’s a lot to ask of a youngster, because you’ve got so much going on — you want to establish yourself at (AFL) level,” he said.

“To go after a player as well respected as Joel Selwood and to lose in your eighth game. He only had six touches tonight, so clearly he didn’t impact the game.

“I’d rather see him establish himself first, then bring that extra element into your game.”

AFL Media journalist Riley Beveridge held the opposite view, saying Ginnivan provides a spark and edge for the Magpies.

“It’s cynical but it’s helping his team. His job is to get under the skin of the opposition, when they kicked two straight goals on the back of him getting into Tom Atkins and Joel Selwood, I found that roused Collingwood at the time,” he said.

“They all got around him, this is an eighth gamer who’s really giving his side energy and life.

“I’m OK with this, I quite like it. Hayden Ballantyne built a career out of it. Clearly that was a pivotal moment.”