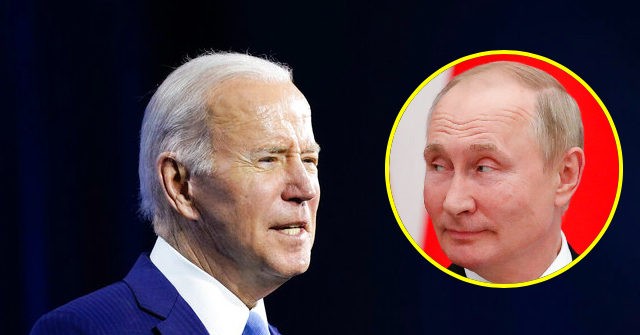 The Chinese state propaganda outlet Global Times condemned President Joe Biden on Sunday for asserting in remarks in Poland this weekend that Russian strongman Vladimir Putin “cannot remain in power,” accusing him of seeking to “make Russia collapse again,” a second time after the fall of the Soviet Union.

The Chinese Communist Party, and the Global Times in particular, have expressed preoccupation with the events that led to the end of the Soviet communist regime for years, referring to its demise as a less for Beijing that it takes with utmost seriousness. In 2017, applauding Chinese dictator Xi Jinping after the debut of his personality cult ideology, “Xi Jinping Thought of Socialism with Chinese Characteristics for a New Era,” the Global Times loudly proclaimed that China would escape the Soviet Union’s fate by clinging to “ancient traditions” that make Chinese political culture superior to Russia’s. The propaganda outlet has referred to the liberation of the post-Soviet states as a “geopolitical disaster.”

The Global Times took umbrage this weekend at a bizarre remark Biden made in Poland that appeared to be inviting the Russian people to overthrow Putin.

“For God’s sake, this man cannot remain in power,” Biden said, concluding a speech on the ongoing war in Ukraine in which the American president declared the war “a strategic failure for Russia.” Russia invaded Ukraine in 2014 but greatly escalated the conflict in February, launching a full-scale assault on Kyiv and other major civilian population centers.

The White House appeared to rapidly backtrack from Biden’s remark, insisting that he was “not discussing Putin’s power in Russia, or regime change,” but allegedly Putin’s military power in Ukraine and influence over neighboring countries. Anonymous rumors in corporate American media outlets claimed that the comment was not part of Biden’s scripted speech.

Biden’s quip prompted administration officials to scramble and walk back his comment, in an effort to reassure the world that the United States was not calling for regime change in Russia. https://t.co/2zMYYBvr3Z

“The President’s point was that Putin cannot be allowed to exercise power over his neighbors or the region,” a White House statement claimed.

Biden himself denied that he was calling for regime change on Sunday.

The Global Times nonetheless condemned Biden, claiming that he had made the war between Ukraine and Russia a “personal” conflict between himself and Putin and that Biden sought the “collapse” of the Russian government.

“The Biden administration’s real and desperate intention in the Ukraine crisis has been exposed – to turn Ukraine into a mire so that Russia keeps bleeding, and to force Russians to yield again and choose a pro-US regime,” the Global Times speculated, citing Chinese Communist Party-approved “experts.”

“Biden has just said what’s really on his mind about the Ukraine crisis. All of those sanctions, stigmatizations and demonization against Putin and Russia just serve one key purpose – to make Russia collapse again,” one such “expert,” Chinese professor Wang Yiwei, is quoted in the article as saying. “US decision-makers like Biden are expecting another ‘Mikhail Gorbachev’ to emerge and replace Putin. This is the best result that the US hopes to get.”

The Chinese government media outlet also accused Biden of having “hurled invective at Putin” by accusing him of war crimes and calling him a “dictator.”

“Just as the US has tried to separate Russians from Putin, it has also tried to separate the Chinese people from the Chinese leader of the Communist Party of China, and has always failed,” the state outlet claimed, “because Washington’s decision-makers just don’t understand that their hegemonic ambitions and hostile moves toward Russia and China threaten the peoples of Russia and China, not just any specific individual or political group, said experts.”

“I would not use [Biden’s] words,” Macron said, insisting “everything must be done to stop the situation from escalating” to achieve “first a ceasefire and then the total withdrawal of [Russian] troops by diplomatic means” https://t.co/crtVryYG6L

Biden has not called for the Chinese people to overthrow Xi Jinping or the Communist Party at press time.

By Monday, rather than condemning Biden for taking too strident a stance against Russia, the Global Times criticized Biden for not producing any tangible results from his presence at a NATO summit in Brussels last week.

“After so many summits with the aim to strengthen the role of so-called trans-Atlantic alliance, no actual measure was put forward to promote peace and talks – not even a public statement,” the Global Times mocked. The propaganda newspaper went on to accuse America of being “the initiator of the Ukraine crisis” and “trying to push the entire world into its huge trap.”
Putin announced a full-scale invasion of Ukraine in late February in a speech in which he justified the military assault by claiming that Ukraine as having “no tradition” of being a real country and that the concept of a sovereign Ukraine “was  completely created by Russia.” Putin’s initial remarks did not mention the United States.

In a speech formalizing the “special operation” to “de-Nazify” Ukraine, Putin accused Ukrainian President Volodymyr Zelensky of “genocide” and did not mention other states by name. He did appear to threaten to use nuclear weapons against “those who would be tempted to intervene,” but did not lay any blame on them for the conflict.

Ukrainian officials have denied all accusations of “genocide” and Nazism. In a speech addressed to the Russian people, Zelensky noted that his ancestors had fought Nazi Germany and died in the Holocaust, asking, “how can I be a Nazi?”

China has largely abstained from supporting either state, instead making vague calls for “dialogue” while voting against condemning Russia’s invasion at the United Nations and selling itself as a fair mediator to Kyiv.