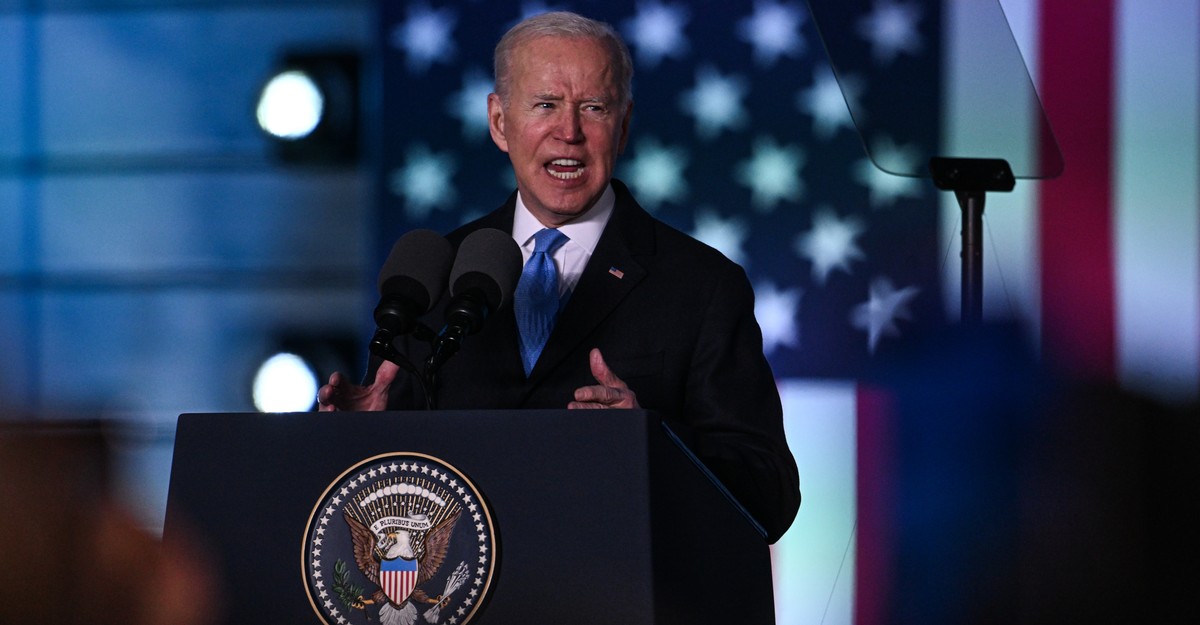 Joe Biden has been a model of restraint during the most serious global crisis in nearly sixty years, and thank goodness for that. He has provided assistance to Ukraine while keeping NATO together against the possibility of a Russian attack against the Alliance. He has resisted calls to engage in high-risk escalatory moves—such as a no-fly zone—while inflicting damage on the Russian economy and making clear the depth of America’s outrage at Putin’s war of conquest.

But Biden broke his long streak of message discipline during a speech in Poland today, when he added an apparently unscripted ending: “For God’s sake, this man”—meaning Russian President Vladimir Putin—“cannot remain in power.”

The sound that could not be captured by the cameras after Biden spoke was dozens of staffers slapping the palms of their hands against their foreheads. Predictably, the media in America and elsewhere seized on this statement as if it were some new policy or a NATO war aim and asked if the President of the United States was calling for regime change in, of all places, Moscow.

Biden’s staff lamely offered that the president was saying that Putin “cannot be allowed to exercise power over his neighbors or the region. He was not discussing Putin’s power in Russia, or regime change.” The United States, as Congressman Jim Himes of Connecticut, a member of the House intelligence committee, later told CNN, does not have a new policy of regime change, and has no overt or covert programs aimed at such a goal in Russia. But the news cycle was already in full swing, with CNN and others quoting Biden in their chyrons and prodding their guests to speculate on the president’s meaning.

What Biden was doing, of course, was being Joe Biden. He was speaking for all of us, from the heart. One of the more endearing things about the president—at least for those of us who admire him—is that he has almost no inner monologue and regularly engages in the kind of gaffe where a politician says something that is impolitic but true.

This was not the time for such a moment, and even those who think Biden has exhibited sterling leadership during this crisis should admit that the president’s remarks were an unforced error. Putin has already made himself a pariah in the West, and though Biden has been right to call Putin a thug, a butcher, and a war criminal, it is another thing entirely to use language that could be misconstrued by both the American public and the Kremlin as a suggestion that United States is interested in changing the Russian regime.

Biden’s comment was poorly timed, too, because Russia’s high command seems to be preparing for a face-saving retrenchment in Ukraine. So far, the Russians seem to have taken Biden’s remarks more calmly than the American media. Kremlin spokesman Dmitry Peskov, never one to miss a chance to castigate the United States, said only that this was a question for the Russian people, and not for Biden. The Russian people, of course, have no say in who rules them, but Peskov’s answer amounted to a shrug.

Still, every day that Russia’s unprovoked war of conquest against Ukraine drags on, the danger of escalation to a world-threatening confrontation between East and West remains. Putin, whose strategic aims have now collapsed, might yet murder more Ukrainians in rage at his humiliation. He might try to provoke NATO into an intervention. Any of the four nuclear powers involved in the conflict could make a mistake or fall victim to a misperception. Now is not the time for improvisation.

An international crisis requires steadiness and prudence, and though Biden has shown those qualities in spades, his ad-libbing in Warsaw is a reminder that even small slips pose major risks during tense times. It is especially challenging to stay on message in a 24/7 media environment in which far too many commentators and pundits have already shown an unseemly interest in courting a new World War. When John F. Kennedy was making his way through the Cuban missile crisis, he had only to contend with more easily controlled newspapers and three short newscasts each evening. Biden, by comparison, is living with a Greek chorus of millions offering their commentary and advice—some of it breathtakingly reckless.

It is hard to blame Biden for giving in to his famous temper after talking to the people who have suffered from Putin’s barbarism. But the words of every world leader matter right now, and none more than those of the president of the United States. We should now let his remark pass for what it was—an outburst—and get back to helping Ukraine save its independence.