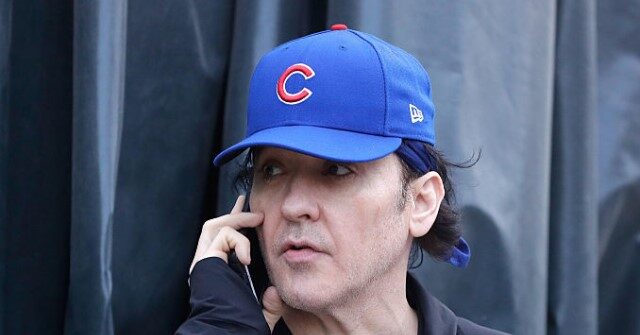 Hollywood star John Cusack claimed Friday that former President Donald Trump was looking to sell documents that are allegedly at the center of the FBI’s raid this week at Mar-a-Lago in Florida.

The Say Anything star made the allegation in a tweet Friday that he appears to have deleted, then reposted.

The chances the man who buried his ex wife on a golf course for a tax break – in debt and comprimised all over world would have those documents for any other reason then to cash in is zero https://t.co/HcVyB8mYTE

Cusack reposted and commented on speculation by Walter Shaub, a “Senior Fellow” at a government oversight nonprofit. “If [Trump] kept nuclear secrets in a locked storeroom at a golf resort for a year and a half, it seems hard to believe that our government remains the only one with copies,” Shaub wrote on social media. Cusack appeared to endorse the conspiracy claim, based on anonymous sources telling the Washington Post that the FBI was searching Mar-a-Lago for “classified documents relating to nuclear weapons.” The actor asserted without evidence that the former president is “in debt” and is “comprimised [sic] all over the world” and thus would be likely to sell state secrets for personal profit.

Cusack even cited the fact that the late Ivana Trump is buried at Trump National Golf Club in Bedminster, New Jersey, as proof of the former president’s duplicity and all-consuming greed.

As Breitbart News reported exclusively Friday, the FBI waited nearly three full days from the time the search warrant was issued to execute the raid — undermining the insinuation that agents were responding to an urgent national security concern.

The raid only appears to have boosted Trump’s popularity among Republicans. Politico reported that a record high of 58 percent of Republican voters now say they would vote for Trump in a 2024 presidential primary.

A recent survey found the FBI’s raid has motivated most Americans to vote in the midterm election in November, with 70.4 percent, saying the FBI’s raid of Trump’s residence will increase their motivation to vote