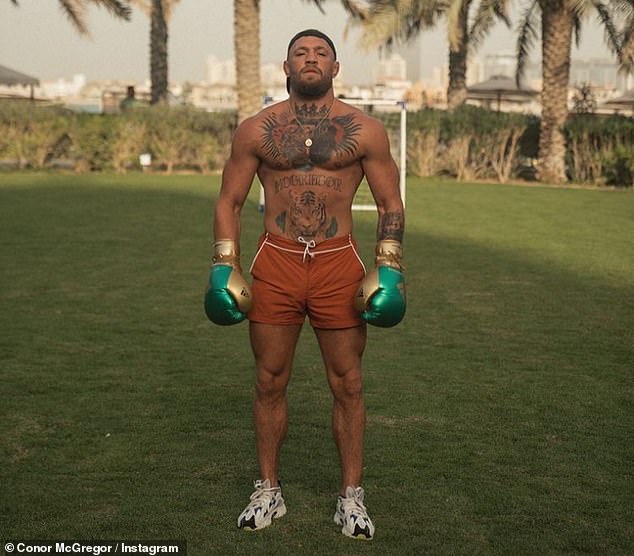 By Will Griffee For Mailonline

Jorge Masvidal has insisted that Conor McGregor will duck a fight with him at all costs because a KO defeat would harm the Irishman’s brand.

The pair have been trading barbs on social media but ‘Gamebred’ claims the former two-weight champion has already turned down a potential contest.

He told the MMA Hour: ‘He wants to stay relevant so he takes shots, but he’s not going to fight. The UFC has offered him this fight, as you and me both know this could be the biggest fight in UFC history, why would he not want to cash in on that paycheck?

Conor McGregor has no intention of fighting Jorge Masvidal, according to ‘Gamebred’

‘Because he knows I’m going to beat the f**k out of him. I’m not a wrestler so if I beat him it really looks bad for his brand because I’m only going to beat him only way, f*****g in his face, standing up, punching him, knocking his ass out. It’s not going to be good for the Conor brand or his cheap ass whiskey.

He went on: ‘So that little b**** has to do what he has to do and take to Twitter and talk shit, but when they offer him the contract he says stupid f*****g things that can’t happen.

‘I haven’t been in that weight class for five, six years I can’t physically make it anywhere.

‘He wants to do things that are just not real and then he wants to talk shit. I’ll entertain the s*** talking from time to time when I get bored but we both know he’s not fighting nobody.

‘Dana White called it a long ass time ago, I’m too much man, too much size as Dana says and it’s stuck with him. At the same time, he can’t do anything about it.

‘He knows when we get in there we are both striking it up I’m going to crack his ass. Everyone saw how his fights with Nate went and then you see my fight with Nate and I made Nate dance and drop to the f*****g floor and grab his stomach and pray to God.

‘Conor knows I got f*****g power and I’m not going to get tired throwing blows.’

McGregor has fought at welterweight before and has bulked up since breaking his leg last year but it appears more likely that he will return at lightweight.

Masvidal remains a lucrative option for ‘Notorious’ and it will be fascinating to see who the UFC opt for when their biggest pay-per-view star comes back.