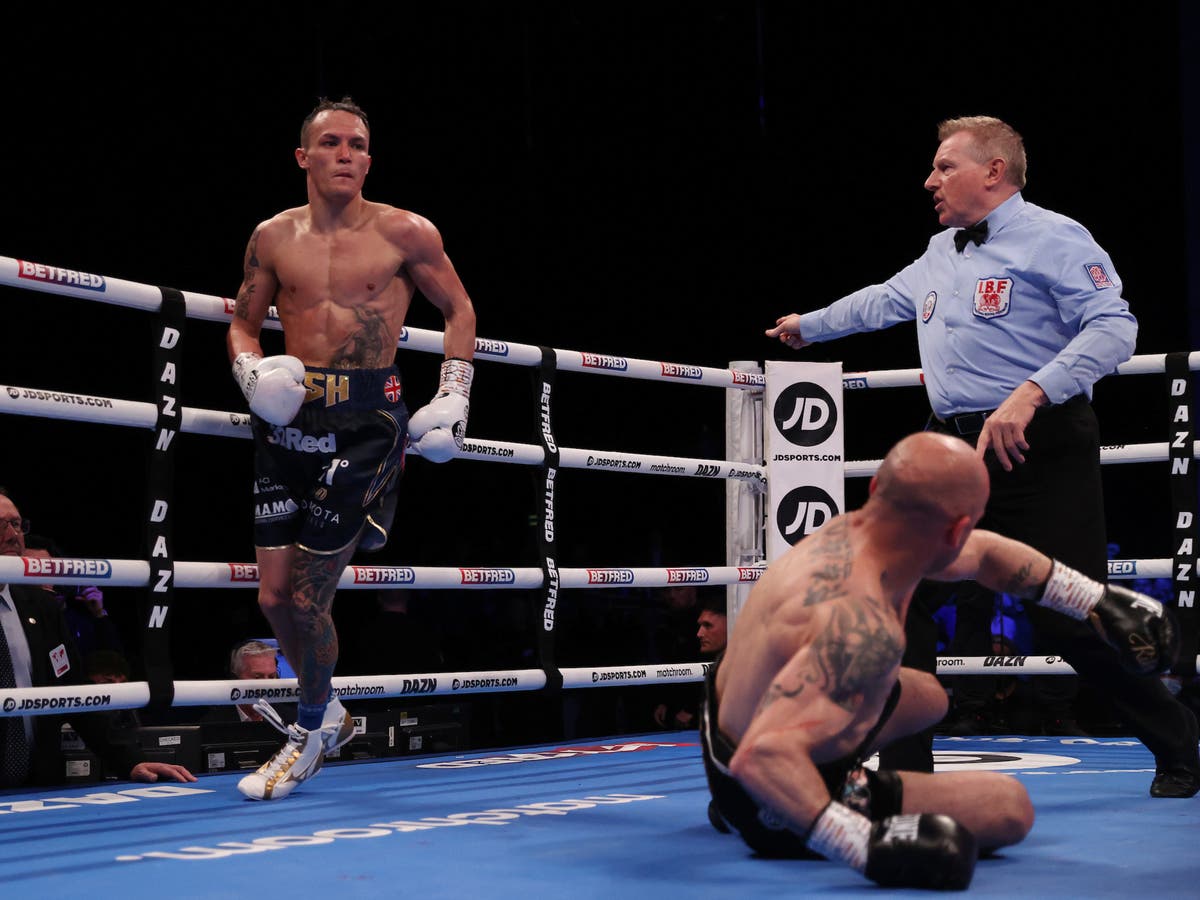 Josh Warrington became a two-time world champion after stopping Spain’s Kiko Martinez in round seven in Leeds to regain the IBF featherweight title.

Warrington, 31, reclaimed the same IBF crown he lost 14 months ago in thrilling fashion, blitzing a tough and durable defending champion to the delight of a partisan, sell-out crowd at the First Direct Arena.

Martinez, who somehow survived a first-round knockdown and was badly cut above his left eye, came under a barrage of heavy punches in the seventh and the referee stopped the contest two minutes and 12 seconds into the round.

Warrington proved his critics wrong with a whirlwind display in front of his raucous army of fans, catapulting back to the top of his weight division and putting a wretched 2021 behind him in style.

‘The Leeds Warrior’ launched a ferocious assault on Martinez from the opening bell. A vicious right hook landed flush on Martinez’s chin and sent him to the canvas. He rose to his feet after a count of eight before a cut opened up above his left eye, close to his nose.

The defending champion came under serious pressure in the second round as the Leeds crowd roared Warrington on to what they hoped would be an early victory.

But Martinez proved he is as tough as a walnut. He weathered the storm and looked to get back in the fight as Warrington eased off the pedal.

Warrington had his opponent on the ropes again in the fourth round and a series of pumping rights in the fifth cranked the arena back up to full volume.

Martinez was slow to come out for the sixth as his cut eye was tended to and ended the round nodding in appreciation after being caught by another ramrod right at the end of it.

Warrington sensed it was his time and hurled himself at the Spaniard at the start of the seventh, trapping him on the ropes and pummelling him to a standstill before the referee stepped in to end the fight.

The Yorkshireman bounced back from his first career defeat and a technical draw in his previous two fights, both against fast-emerging Mexican Mauricio Lara.

Warrington had dropped down his weight division’s pecking order, but after seeing off Martinez for a second time – he beat him on points at the same venue in 2017 – he has recaptured the IBF belt and now has even bigger prizes in his sights.

An all-British showdown against Nottingham’s Leigh Wood at Elland Road or the City Ground has been mooted, as have States-side unification fights against WBC champion Mark Magsayo or WBO belt-holder Emanuel Navarrete.

Earlier on the undercard, Ebanie Bridges won the IBF bantamweight title at the second attempt after beating Argentina’s Maria Cecilia Roman on points.