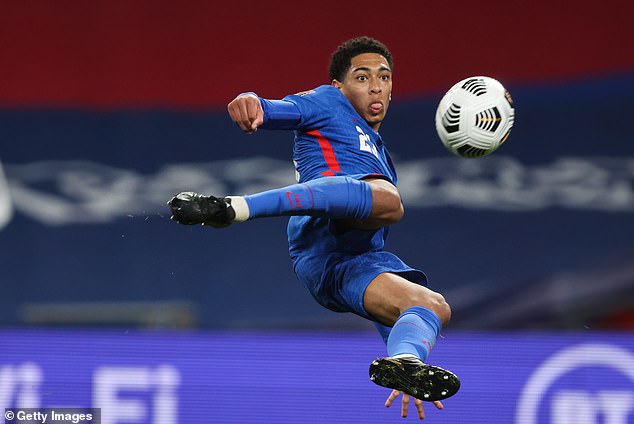 When does the temptation to fully unleash Jude Bellingham become too compelling for Gareth Southgate to resist?

There was a moment against Switzerland on Saturday that summed it up. Bellingham had the ball but, under pressure from a midfielder, there looked to be little option but to play a simple pass back to defence.

It would have been the safest option, but instead Bellingham dropped his shoulder and cut inside to leave his rival for dead. He then drove threateningly at Switzerland’s exposed defence.

He had only been on the pitch for a matter of minutes after his 80th-minute introduction, but it was Bellingham in a nutshell. A central midfield game-changer.

‘He is developing exceptionally well for a player of his age,’ Southgate said of the 18-year-old Borussia Dortmund midfielder on Monday.

‘He is being asked to play in a number of different positions this year. Dortmund have played 3-4-3 where he has been one of the double pivots, 4-3-3 where he plays as one of the No 8s and a diamond where he has played on the outside of a diamond. He has different tactical challenges to deal with.’

Bellingham should get more than a 10-minute cameo against Ivory Coast at Wembley on Tuesday night, with the youngster expected to start.

Southgate has been careful to ease Bellingham into life as a senior international. It makes sense given he is still a teenager, albeit a freakishly talented one displaying maturity beyond his years.

That wisdom extends off the field, too. Bellingham’s desire to learn German speaks volumes about the player’s mindset. He is surrounded by English-speaking colleagues at Dortmund, and could easily get by without learning the language.

But that isn’t enough for Bellingham. Credit to him for wanting to go the extra mile.

His discipline should come as no surprise. The son of a policeman, Bellingham knows all about walking the straight and narrow.

His father Mark Bellingham is known to take a hands-on role in his son’s career and the way he has developed on and off the pitch is testament to his upbringing.

And there’s another Bellingham on the horizon, too. England Under 17 international Jobe Bellingham, 16, is said to be just as gifted as his older brother.

But while everyone already knew about Jude’s footballing ability, his communication skills have caught his England colleagues by surprise.

Bellingham speaks with confidence and eloquence. Quite the well-rounded young man.

Southgate isn’t blind to what is in front of him. He knows a special talent when he sees it. But it seems the England manager still needs a degree of convincing, despite the growing clamour for Bellingham to become a fixture in the side.

‘There are things, understandably for any player, for him to work on and for him some specifics we are looking for from him,’ explained Southgate.

‘But he is very coachable, wants to learn and is highly motivated. He is already getting brilliant experiences with his club and European football already so he’ll be involved in the game and it will be good to see how he does.’

It is difficult to argue with Southgate’s handling of Bellingham. Declan Rice and Kalvin Phillips, Bellingham’s rivals for places in the centre of England’s midfield, were excellent during the run to the Euro 2020 final.

Jordan Henderson’s influence on the national team during the Southgate era shouldn’t be under-estimated either — even though it is now diminishing.

But there surely must be a way to harness Bellingham’s incredible talent in this team. Does it mean sacrificing Southgate’s ‘double pivot’ of two holding central midfielders?

Bellingham plays regularly for Dortmund in the Bundesliga, partnering with Erling Haaland

Perhaps. But whatever the solution, Bellingham should be part of it moving forward.

Some at St George’s Park have doubts over the standard of the Bundesliga. Performing consistently in Germany’s top division hasn’t fully answered the nagging questions Southgate still harbours over Bellingham.

‘The Bundesliga is definitely a brilliant league for young players and coaches to develop but of course the standard of the Premier League is undoubtedly higher,’ said the England boss.

Premier League or not, Southgate will surely succumb. Bellingham should be the present and future of English football.