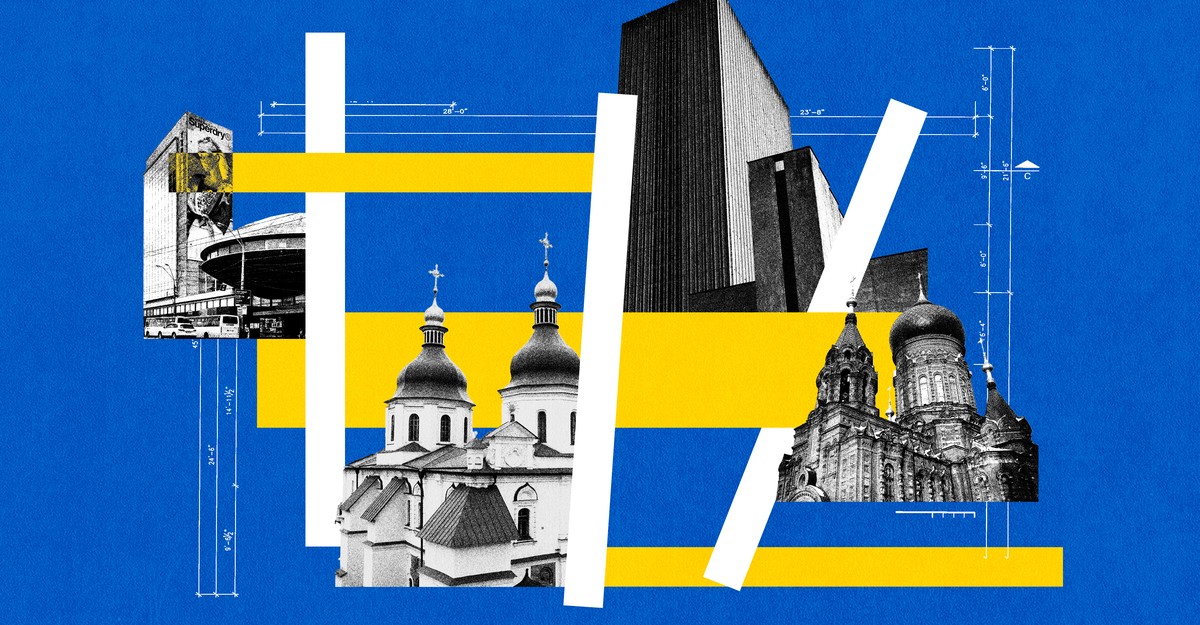 Kyiv is often described as the cradle of Slavic civilization. According to legend, the city was founded in 482, when a group of siblings from a royal Slavic tribe staked out a settlement along the banks of the Dnipro River. By the end of the millenium, under the leadership of Volodymyr the Great, it had become the capital of a major European civilization—Kyivan Rus. At this point, Moscow was barely a village.

Apart from Maidan Nezalezhnosti, Kyiv’s main square and protest grounds, most of what Westerners know of Kyiv are landmarks stemming from this storied past. Saint Sophia Cathedral and the Kyiv-Pechersk Lavra, both onion-domed churches that date back to the 11th century, are the city’s most famous monuments. Though beautiful and singular, they represent just one dimension of Kyiv’s landscape.

I learned this firsthand in 2005, when I arrived in Kyiv on a fellowship. I rented an apartment in a Soviet-era high-rise near the Lybidska metro station, in the city center. The elderly woman who tended my apartment building cultivated dandelions in the courtyard, using a set of discarded car tires as pots. Around the corner was another Soviet-era building that looked like a flying saucer. On the other side of the metro stop, deep inside a humming market constructed out of old shipping containers, was a restaurant serving the best, most authentic Chinese food I’ve had in my life. The brutalist tower of the Vernadsky National Library of Ukraine beckoned from across a set of whizzing highways. The library hadn’t yet digitized its card catalog, making research slow, but I visited often to just sit in its reading room, where light flooded in from rows of circular skylights.

Read: I can’t stop watching a livestream of Kyiv

The Kyiv I came to know was resourceful, whimsical, and layered with history. As fighting continues around the capital city, I gathered five Ukrainian urbanists to write about the places that are dearest to them in Ukraine’s capital.

“In Podil, a central district of Kyiv that has been a river port since the Middle Ages, there is a housing complex from the late Soviet era known unofficially as 4blocks. Stretching across four city blocks, it was built from 1985 to 1994 and is one of the few examples of what could be called Ukrainian postmodernism.

Although virtually all Soviet housing was centrally planned, for the 4blocks complex, architects were selected through a rare open competition. This was radical because the community got to shape its construction. Each of its 19 buildings had a different architect who integrated environmental features and existing buildings, rather than ignoring them or tearing them down. Despite the looming economic crisis, the complex was audaciously decorated. Arches, passages, columns, and color were used to create a welcoming, lively atmosphere. Local housing cooperatives and nearby factories sponsored and furnished the apartments.

Although the complex was mostly completed by the time the Soviet Union collapsed and has been continuously inhabited, few people know its history. I return again and again to 4blocks as a symbol of an alternative vision of a vibrant 1990s that never happened.” — Oleksandr Anisimov, chief specialist in the department of urban mobility and street infrastructure for the Lviv city council in Lviv, Ukraine

“As much as I love Kyiv’s historic center, its residential neighborhoods, where there aren’t any notable landmarks, are just as special to me. My husband, Egor, grew up in Obolon, a residential district in the northern part of the city. We lived there together for 11 years, until we were forced to leave the night of February 24 with our mothers and our cat.

Egor remembers that during a period of large-scale development in Obolon in the 1980s, there were no playgrounds, so children played in the mountains of sand on construction sites and swam among ice shards in a bay on the Dnipro River. My favorite parts of Obolon are the four-mile-long embankment that runs parallel to the river, the experimental architecture (including two buildings we call “corn cobs” because of their resemblance to the plant), and the smell of malt that wafts from the brewery a block from our house.

We have lived our lives amid Obolon’s concrete, sand, and river. In 2015, my husband and I hosted my parents and sister from Makiyivka, Ukraine, when shelling there became unbearable. On the morning of March 14, the first Russian shell hit an apartment building in Obolon, killing at least one person. War had again arrived in our district.” — Anastasia Ponomaryova, architect and internally displaced person in Ivano-Frankivsk, Ukraine

“The word exhibition has had a special meaning in Kyiv since 1958, when the Exhibition of Achievements of the National Economy (now the Expocenter of Ukraine) opened on the outskirts of Holosiyivsky Park. The Soviet regime developed the complex as a propaganda tool to highlight ​Ukrainians’ achievements and the bright future ahead under Communism. Known as “Ukraine in miniature,” visitors could tour dozens of pavilions devoted to topics such as Ukraine’s mining, engineering, and agriculture. Factory workers and collective farmers were gifted trips to the exhibition to inspire them to contribute more victories to the Communist cause.

When I was little, I enjoyed visiting the exhibition with my family on weekends, not knowing, of course, its ideological intent. The main square contained majestic neoclassical palaces and fountains surrounded by blooming flower beds. There were lots of foods to try, a movie theater, a tour bus that guided you around the grounds, and green spaces that served as an oasis for inhabitants of the metropolis.

After the collapse of the Soviet Union, the complex lost its purpose and began to deteriorate. In the last decade, though, life gradually returned; the site began to host music festivals and exhibitions. Recently, there was a proposal to demolish one of the modernist pavilions and redevelop the land. Kyivites united to defend the integrity of the complex, showing how valuable and beloved the exhibition remains.” — Yevheniia Moliar, art historian; participant in DE NE DE art collective, which aims to rethink the role of Soviet history in public space; and refugee in Berlin

“The Flowers of Ukraine is a modernist building designed by the Ukrainian architect Mykola Levchuk. Completed in 1985, it was a true botany palace in Soviet times, housing a flower shop, a greenhouse, an exhibition hall, a research center, and a workshop space for children.

After the dissolution of the Soviet Union, the building was rented out to small businesses. In 2021, a developer announced plans to demolish it and replace it with commercial real estate and retail spaces. My fellow activists and I started a preservation campaign, which culminated in a protest of 200 people wearing floral-patterned clothes and holding flowerpots. The developer decided to move forward with the demolition regardless. Upon hearing the news, I rushed to the site to find dozens of anxious people, idle policemen, and two demolition excavators tearing down the greenhouse. I livestreamed the scene and urged people to gather.

Read: Ukrainians are using the quiet resistance tools they need

When the excavators started destroying the facade, the growing crowd knocked over the fence and flooded the site, forcing the excavators to stop. We then squatted in the building until the excavators left. This movement to preserve the Flowers of Ukraine united the people of Kyiv, public figures, and politicians alike. A month later, the building was added to a list of cultural-heritage sites. A lengthy legal battle between the activists and the developer is ongoing, though the war has halted the proceedings. But we have already won by raising public awareness about heritage protection and development regulation in Kyiv, and by building a strong community of preservation activists.” — Dmytro Soloviov, activist, architecture researcher, writer/photographer for @ukrainianmodernism on Instagram, and internally displaced person in Ivano-Frankivsk, Ukraine

“I love the green and blue parts of Kyiv the most. One of my favorite places is the Horbachykha tract running along a tributary of the Dnipro River on Kyiv’s left bank. My wife and I visit with our friends each season. I am glad that we have a strong community that defends these green spaces from private developers. Now some of these people are defending Kyiv from Russian invaders.

The British anthropologist Tim Ingold has suggested imagining the environment as a continuously unfolding story. This idea makes me think of the story of my own home. I grew up in eastern Ukraine, in a suburb of Luhansk. When my parents bought our house, in 1998, it came with young trees—cherry, apple, and peach. Since the beginning of the war, in 2014, no one has been able to live there. No one has tended to the house or the trees.

During the eight years that I’ve been away from Luhansk, I have wondered when my home will fall into ruins. However, abandoned buildings don’t disintegrate at once; other forms of life come to inhabit them. I know from a neighbor that wild grapevines have grown over the house’s roof. Mice have gnawed the lids off the honey jars and eaten all their contents. Mold has covered the walls, the floor, our books, and our clothes. The fruit trees so dear to me have kept flowering, their branches cracking under the weight of the unpicked fruit.

During the pandemic, I started taking day-long treks in Horbachykha and other wild green spaces in Kyiv. As I walk, I sometimes find myself thinking that, at this moment, my childhood home might look like these landscapes.” — Dmytro Chepurnyi, curator and cultural anthropologist in Kyiv