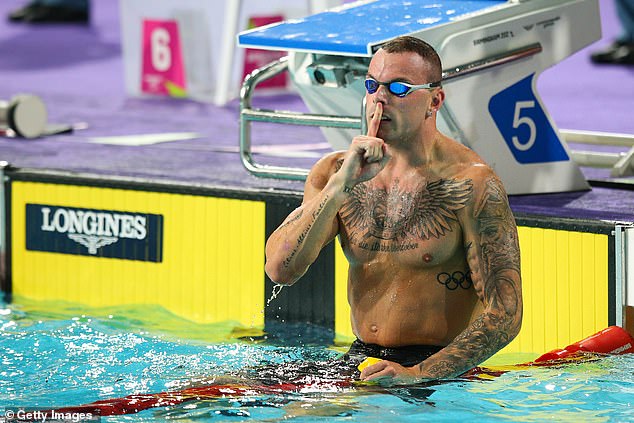 Kyle Chalmers’ dad BREAKS DOWN on live radio as he brands ‘pool love triangle’ furore ‘bullying and harassment’: ‘Why would you want to put your child through this?’

Kyle Chalmers’ father has broken down on live radio as he accused Swimming Australia of failing to provide a duty of care to his son at the Commonwealth Games.

‘It’s a form of bullying and harassment, these people (media) get away with it, they destroy people’s lives,’ he said before breaking down.

‘It has been hard watching Kyle go through all this alone, you feel helpless 15,000kms away.

‘I feel Swimming Australia should have supported Kyle more. ‘

‘Everyone has jumped on the ‘Rockstar’ bandwagon,’ he fumed.

‘Do we ask Johanna Griggs about her personal life, and do we care about it’?

Hours earlier, Chalmers silenced his critics in his eyes to win his third gold medal at the Commonwealth Games in Birmingham in the men’s 100 metres freestyle.

It wasn’t his fastest swim, but he said it was ‘bigger than just me racing.’

‘And, as much as it’s nice to win, it’s probably just a big sense of relief, rather than the satisfaction that I thought I’d feel and want to feel after a performance like that,’ he said post race.

Chalmers, 24, admitted he barely slept ahead of the 100m freestyle heats.

But he pushed on to send a message to his ‘haters.’

‘I’ve had definitely big battles with mental health over a long time, and it’s one of the most-challenging things that I’ve had to face,’ he said.

‘I think it’s important that people have the courage to stand up and speak about it.

‘I’ve been around for a while and I need to create the conversation and try to help people going through similar things and just make it more normal.

‘If I can be a positive influence and try to help people in the same struggles, I know that I’m doing my job in the sport and hopefully inspiring people.’

Chalmers’ future in the sport is unknown.

Team officials will no doubt want him on the team to swim at the Paris Olympics in 2024, but the emotional sprinter has admitted he may walk away from the sport to aid his mental health.