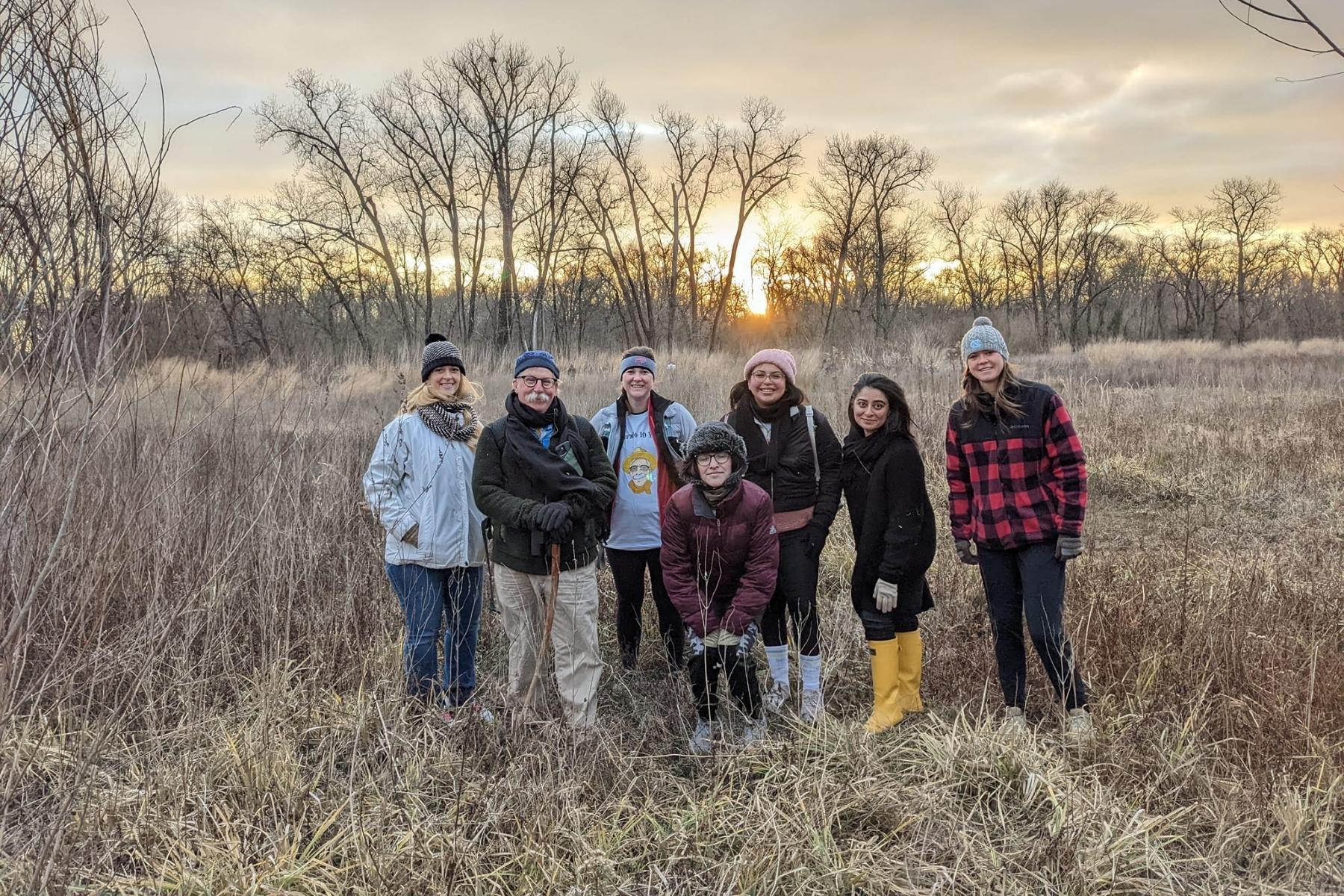 I got up at the usual time last Saturday. As I drove in the gathering dawn, I started streaming music, drinking Cultivar Coffee from an old mug. The coffee and the tunes together got me energized for the hike. I’ve just discovered some of the rising Black Nashville Country artists and was listening to Joy Oladokun, a Nashville-based Nigerian American singer. The lyrics of her song “I See America” are powerful.

We bought tickets to see her at Club Dada. The show requires proof of vaccine! Check it out.

Ben and Scott had suggested we meet at 7 a.m. in Joppa to walk the Lower Chain of Wetlands. It was a very blustery morning. I was happy to have a new fleece and the wonderful warm scarf my friend Maryam had brought me from Pakistan. I drove past the streets named after WWII battles: Cherbourg, Corregidor, Burma, and Luzon, in honor of the veterans who lived in this neighborhood, and turned down Fellows Lane to where it dead ends. I parked in the parking area for Joppa Park, which is a really pretty spot. It sits up on a wooded bluff filled with Post Oak Trees that are older than our city.

I was surprised when I drove up to see a large number of cars. That’s unusual for when I meet Ben at 7 on Saturday mornings, especially when it’s a cold, windy day. I grabbed my daypack and Bois d’arc walking stick and got out to the car. I was greeted by six of my staff members. I saw six fierce women justice warriors (and some of their partners) dressed to brave the cold and wearing T-shirts with a caricature of my face on them. Maybe that happens for a lot of you, but it’s never happened to me before. They told me they were there as a surprise to celebrate my 10th anniversary at HRI.  I felt honored that they would get up early on a Saturday after the hard week they’d all had, to walk in cold windy weather in the Trinity Bottoms. That is very impressive. I was moved by their action. They were seeking to do something they knew meant something to me personally. I won’t lie: leading the past two years has been the hardest thing I’ve done in my 40-year law career, so I really appreciated the gesture.

We gathered together and started walking toward the wetlands. I don’t think they realized what a treat they were in for, because Ben is an exceptional hike leader. He set the stage by explaining that Joppa (pronounced Joppee by community members) was an intact freedman’s town settled by formerly enslaved people. I was impressed but not surprised that my staff would be willing to brave cold weather to do something for someone else, in this case, me. That’s who they are. Our social service staff has been working hard for over a year, delivering emergency aid to clients. They have been working in person during the entire pandemic. My volunteer director, Layne, has been doing heroic work getting documents translated by volunteers from all over the world and placing cases with pro bono lawyers. Our newest lawyer has more than once started preparing for emergency hearings and trials during a pandemic and our marketing director, Maryam, is apparently tireless. I met Maryam when I spoke at D Magazine’s former Leadership Academy, which was an awesome initiative. I’m thankful to D for introducing me to Maryam, a splendid creative soul.

Ben and I talked about a good destination, and we decided to show people a historic Bur Oak. According to oral history, this tree was the site of a Klan whipping grounds. It’s a magnificent tree. Our group was all quiet as Ben painted the sobering picture of what life was like for Black Dallasites, who could be taken out into the woods and beaten to an inch of their lives, and there was no recourse for them. Think about what it means that almost none of us know that history. I’m thankful for folks at Dallas Truth Racial Healing and Transformation for trying to change that.

After that, we walked over to the Trinity. I think most of them had only experienced the Trinity as the glorified drainage ditch you see as you drive over it, close to downtown, but here it’s an impressive sight. It’s also a very quiet spot with very little traffic noise. In various seasons, we’ve seen squadrons of Pelicans, soaring Pileated Woodpeckers, and nesting Blue Herons. It’s a great place to be introduced to the Trinity River. We walked closer to the river and stood on its massive banks. Beavers had been active, and we enjoyed seeing entire trees that they had cut down and skinned. They are impressive animals. Most of the walking was off trail, so people got a real adventure. We crossed some dry washes that tend to be filled with briars, and this area was choked with Cocklebur, which clung to everyone’s clothes. The plant served as an inspiration to Swiss engineer George deMastral, who invented Velcro. So there’s that. We walked past and under the railroad tracks that are one of the earliest rail routes into Dallas, the Houston and Texas Central RR, which reached Dallas in 1872. We walked to the edge of one of the Wetland Cells and paused to watch a Great Blue Heron. This was our turnaround point.

When I got back to the park, I said goodbye to my staff and thanked Ben and Scott for pulling off this surprise hike. As I drove away, I reflected on the last 10 years. It’s a very rare thing to have a job where you get to do work you would do if you weren’t paid. Working for immigrants has been the best, most meaningful, most inspiring thing I’ve ever done in my life. I’m supremely thankful the board hired me to be the executive director and that I’ve been permitted to do the work for 10 years. I’ve made a lot of mistakes in that time. I’ve had a lot of learning to become a more equitable leader and to learn how to be more inclusive and collaborative. But I can honestly say that I’m more passionate about this mission than I was 10 years ago. I’m also bolder in calling out policies for what they are. The Title 42 expulsions of migrants at the border is a transparently racist policy. I once would have minced my words. But not any longer.

Today I was working in my office, preparing for a panel discussion. I heard laughter. I checked email and saw that we were giving out a green card to a young child migrant. It had taken five years of hard work by our lawyers, social workers, legal assistants, and other staff to make this happen. I was a small part of that team, but I’ve seen a lot of those days over the last 10 years, and I’m thankful I have had the opportunity to see it.

I recently received an award from the Dallas Association of Young Lawyers. When I received it I said this: “As I think about my legacy as a lawyer, I think about a man that most of us have never heard of: George Edwards. Edwards was one of the few White Dallas lawyers who would represent Black Dallasites in his day, and he was the lawyer for Allan Brooks, whose lynching was recently memorialized by the Equal Justice Institute here in Dallas.  One of the pallbearers at his funeral was the legendary Black trial lawyer WJ Dunham.

“At his funeral, a local activist said this about Edwards: ‘Some time ago, I chanced on this quote from Mr. Justice Oliver Wendell Holmes: “It is required of a man that he should take part in the actions and passions of his time, at the peril of being judged not to have lived.”‘”

I’m going to finish what’s left of my career with that in mind.