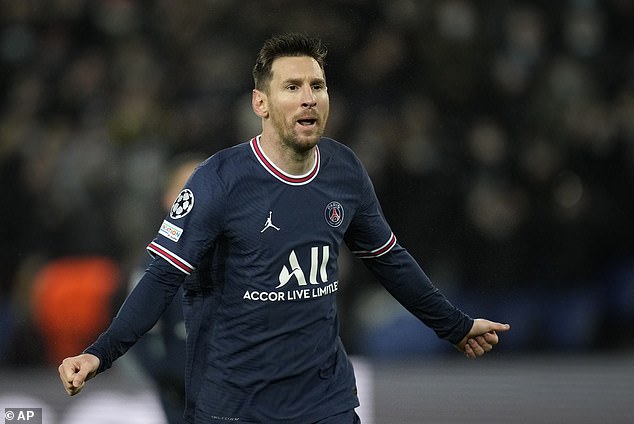 By Daniel Davis For Mailonline

Lionel Messi has generated a new record at Paris Saint-Germain despite his struggles on the pitch, with his superstar reputation pushing shirt sales through the roof.

It has been revealed that his club shifted over one million jerseys for the first time last season, with Messi’s No 30 shirt making up over 60 per cent of the figure.

That is a first for any player in the sport, underlining his continued pull in the shops.

Lionel Messi has generated a record at PSG, with his name pushing shirt sales through the roof

His feat also means that his kit sales have surpassed those of Cristiano Ronaldo, who returned to Manchester United for a second spell last summer.

Incredibly, Ronaldo’s replica tops had made United £187million by last September, although Messi has flown up the charts to overtake him during his stint in Paris.

United are also no longer the club that sells the most shirts, with PSG in the lead.

Cristiano Ronaldo’s Manchester United shirt is popular, but Messi’s jersey has overtaken him

In the hours following confirmation that Messi would be joining PSG following his Barcelona departure, almost €1million (£857m) was generated in shirt sales alone.

The Ligue 1 heavyweights moved their official store to the Champs-Elysees to double down on the rush, and double the surface area available to them.

Marc Armstrong, PSG’s chief partnerships officer, has told Marca: ‘Demand has grown by 30 to 40 per cent and really what can slow it down is supply.

‘When a signing of this size happens, [Cristiano] Ronaldo to [Manchester] United for example, you might think he’s going to get paid by selling shirts, but that’s not the case. You can’t produce a lot of extra shirts.

PSG sold over one million jerseys, with Messi’s shirt making up over 60 per cent of the figure

‘The agreement is set to guarantee very important minimums but we can’t meet the demand for Messi shirts. We have reached the ceiling.

‘Nobody can meet that demand. We are already selling a lot of jerseys, maybe more than any other team in the world for one player, and that puts us at the next level.

‘We have a lot of demand for lifestyle products, the revenue with the Jordan brand is huge, but the demand grows even more when you sign a player like Messi.’

Armstrong also revealed that the club’s marketing and sponsorship agreements rose by 13 per cent after Messi’s arrival, allowing them to sign off on countless deals.

After the superstar was unveiled last August, supporters lined up at club stores to buy his top

In addition, he added that PSG’s social media followings were growing by 1.4million per week, with a notable increase in ticket sales and demand following suit.

Overall, PSG believe they have made £600m in revenue after Messi was signed.

Earlier this week, club president Nasser Al-Khelaifi told Marca: ‘If we make a signing, it is because we can. Look at the case of Messi.

‘It was the same, they said it was financially impossible and we have made money with Messi.’