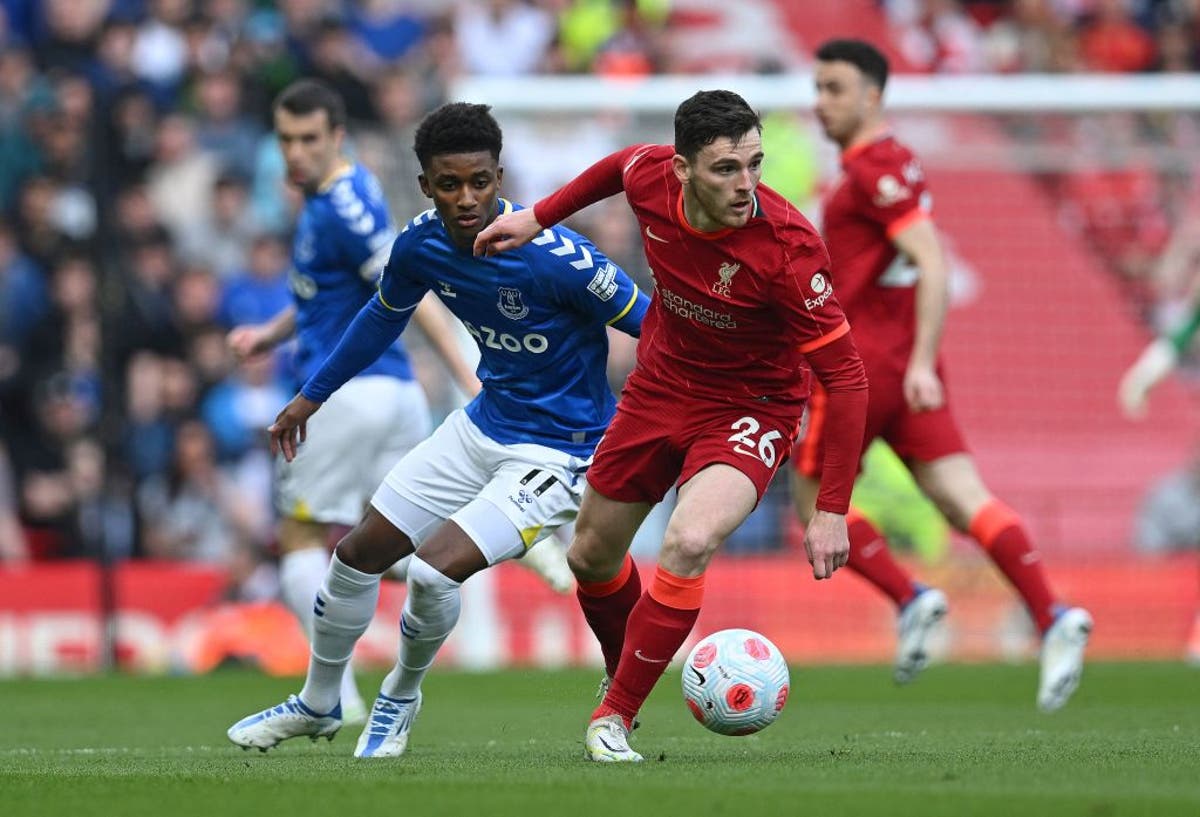 The Reds are still in the running for an unprecedented quadruple this season, but have no margin for error in the championship race after Man City hammered Watford on Saturday to move four points clear having played a game more. Jurgen Klopp’s team have only dropped points once in the league since 2 January though, that being at City only a couple of weeks ago – every other league fixture has ended in victory. They’re also into the FA Cup final and the Champions League semis, the first leg of which against Villarreal comes on Wednesday night.

Everton, meanwhile, have won just one of their last four and despite securing a last-gasp point against Leicester in midweek, they’re now on the verge of the drop zone and facing a very tough end to the season with Chelsea and Leicester next up, making this derby meeting even more important than usual. Follow all the live action from Anfield following the conclusion of the 2pm kick-offs below:

28 mins: Jurgen Klopp will want to see more from Jota and Salah in the final third. They are yet to really get into the game.

The temperature is heading up at Anfield though. Coleman and Jota have just squared up to one another after Coleman had hold of Jota’s shirt. Few handbags but nothing more than that.

The resulting Liverpool free-kick is whipped in dangerously by Robertson and Holgate flicks it behind for a corner.

26 mins: Oh, hello! We have our first piece of drama here today.

Pickford kicks an 80-yard pass straight to the feet of Gordon. He cuts inside before going down inside the area under a ‘challenge’ from Keita.

Referee Craig Pawson deems it to be a dive and he books Gordon. Replay shows it was indeed a dive.

24 mins: Richarlison receives the ball just inside the Liverpool box and manages to force a corner despite being surrounded by three red shirts.

Gordon swings it in and Mane heads it clear of danger.

Thiago fizzes the ball into the feet of Mane who is occupying a central position on the edge of the box. The Senegalese forward takes a touch and spins towards goal before rifling a well-hit strike over the bar.

20 mins: Thiago looks for Salah at the back post but Pickford is determined to come out and meet the ball and he does well to claim it in front of the Egyptian.

Everton try to create a crossing opportunity of their own but Gordon’s delivery is well overhit and Liverpool can pile forward once more.

Not much in the way of clear-cut chances for either side as yet.

18 mins: Alexander-Arnold forces Gordon to the ground for the second time in less than 60 seconds and this time the decision goes Everton’s way inside their own half.

Keane plays a long diagonal from the free-kick but it drifts aimlessly out of play.

16 mins: Richarlison finds Gray galloping through the middle. He cuts inside one, two, three challenges before unleashing a venomous shot which is blocked by Fabinho.

Liverpool lacking that zip in their play in the early stages here. Guilty of giving it away on the edge of the Everton box.

Gordon storms down the left and beats Alexander-Arnold for pace before going down. Looked like a shove from the Liverpool man but no free-kick is given. Harsh.

14 mins: Salah shows his twinkling feet to burst beyond Iwobi but then fouls Mykolenko as he tries to glide past him on the byline. Another soft free-kick but there was a little contact.

Matip ushers Richarlison off the ball and allows it to run out for a Liverpool goal kick. More physical than entertaining so far.

12 mins: Everton have everyone behind the ball when Liverpool are in possession – understandably so.

The hosts are yet to really get going in the final third, even if they are dominating the ball. They have made 98 passes to Everton’s seven (SEVEN) so far.

10 mins: Richarlison goes down after a flick in the face from Fabinho while the Liverpool man was running with the ball. Not much in that, massive overreaction from the Everton man.

Salah interchanges smartly with Fabinho before Holgate gets across to slam away from danger inside his own box.