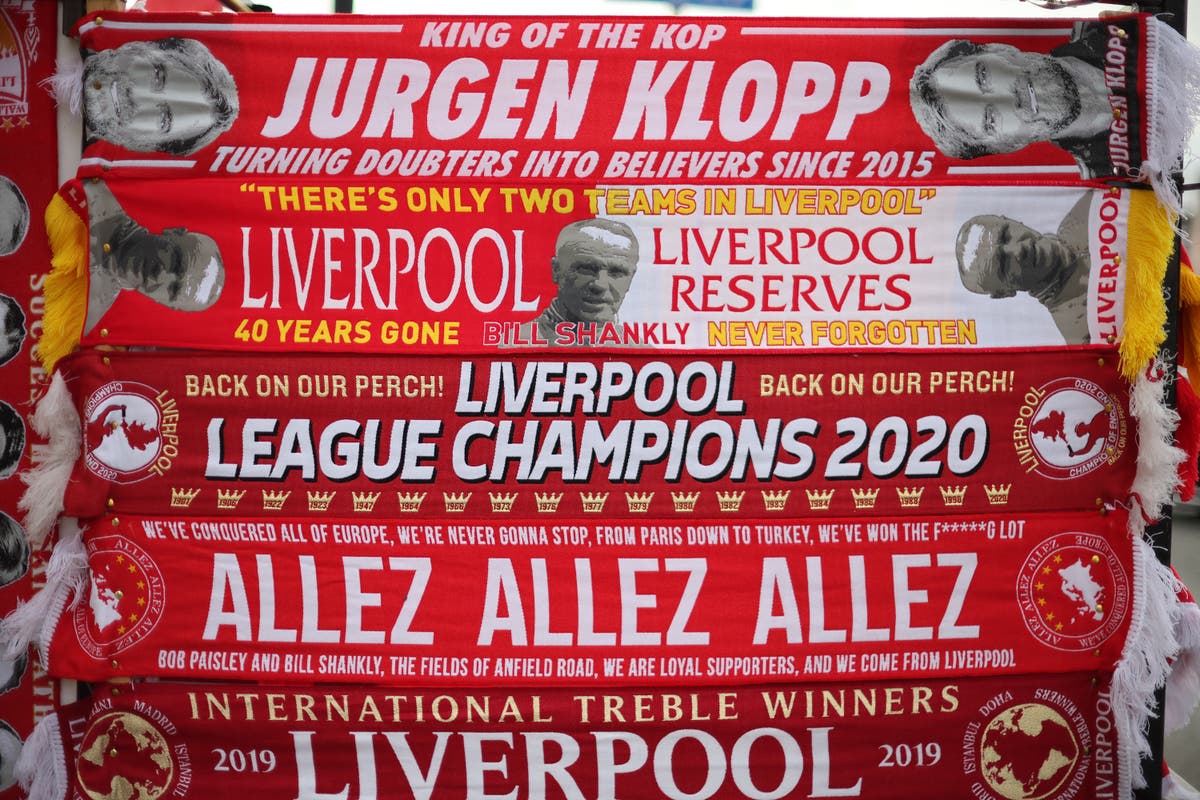 Liverpool are taking on Watford at Anfield as they seek to move top of the Premier League. Jurgen Klopp’s side have won their last nine league games to move within a point of leaders Manchester City, and victory here would send them above City at least until pep Guardiola’s side take on Burnley at 3pm.

Klopp has been boosted by the return to fitness of Trent Alexander-Arnold after the right-back missed the international break with a hamstring injury, but the England international starts on the bench with Joe Gomez playing from the beginning of the match. “Physically he should be fine,” Klopp said on Friday. “Now I have to make the decision about rhythm and these kinds of things.”

For Roy Hodgson and Watford the match represents a stiff test, but they can ill-afford to roll over with the relegation scrap entering its final weeks. With the two sides around 18th-placed Watford in the league – Everton above and Burnley below – meeting next week, the Hornets could find themselves slipping off the pace if they fail to take any points today.

Follow all the action from the Premier League match between Liverpool and Watford below.

Why Liverpool’s quadruple dream may have to wait

One day a team will win all four trophies in the same season. This is not that season.

Liverpool are about to embark on an epic April in pursuit of the elusive quadruple. They begin at Anfield with a relatively downbeat Premier League match against Watford. After that, the ante gets upped rapidly: Benfica home and away in the Champions League; Manchester City in the league at the Etihad and the FA Cup at Wembley; Manchester United and Everton at Anfield as the title race builds to a climax; and the month is rounded out by a visit to Newcastle United, the next megamoney club.

It will be exhausting, exhilarating and bursting with drama. Jurgen Klopp’s team is full of confidence and ready for the challenge.

With the League Cup already under their belt, Liverpool are in a great position. Yet talk of winning all four competitions obscures another remarkable fact. City still have a treble in their sights and Pep Guardiola’s team are subject to the same pressures and fixture congestion as their Merseyside rivals. These are two of the most dominant sides in Premier League history. Both are too good to allow the other to do a clean sweep – or even collect three pieces of silverware.

With the final international break of the campaign over and done with, it’s all systems go from here until season’s end, with trophies and vital points to play for as teams desperately try to land titles, places in Europe for 2022/23 or merely remain in the same division.

Here’s the state of play around the continent as we head into the final two months or so.

Liverpool have won 12 of their 13 home league matches against Watford. The Reds have won the last six of those games by an aggregate score of 22-1.

Watford’s most recent win at Anfield was back in August 1999.

Jurgen Klopp makes four changes to the Liverpool team that defeated Arsenal in their last Premier League game before the international break. Mo Salah and Roberto Firmino come in to replace Sadio Mane and Luis Diaz. Trent Alexander-Arnold makes the bench with Joe Gomez favoured at right-back and Curtis Jones comes in for Fabinho.

Liverpool come into the game sitting just one point behind league leaders Manchester City. Both teams have played the same number of games with Jurgen Klopp’s men having the advantage on goal difference which could come into play later in the season. Three points for the Reds would move them to the top of the table before City face Burnley at 3pm.

Watford are currently 18th and three points adrift of safety. They have played two games more than relegation rivals Everton and Burnley and are in need points. Last time out the defeated Southampton 2-1 and will be hoping to back that victory up with another one at Anfield.

Liverpool vs Watford: Hodgson on competition for places

Watford boss, Roy Hodgson, says that competition for places in the starting XI is healthy at Vicarage Road and that he is happy with the performances of his key players.

He says one of the keys for Watford’s run in will be to keep his players fit and performing to a level that will see them challenge for wins although that task is harder against the top sides like Liverpool. He said:

“That’s good going forward. We need to keep these players fit, keep the competition going, but most important of all this club needs spirit.

“Every time you play a team like Liverpool away from home you know the odds are stacked against you. There’s no secret to how good they are or why they’re good, the quality of their players and the quality of their work. All we can do is hope that we’re able to produce a performance on the day that will give us a result.”

Liverpool manager Jurgen Klopp has long been a fan of having substitutions per game as it allows coaches to better manage player workloads.

“It is top news for football and top news for the players.” he said about the vote. “We have all spoken about it, that the games won’t get less.

“With all the things we know we try to help the players as much as we can but the games are always the most intense and everything we could do we should do.”

“From next season, clubs will be permitted to use five substitutions, to be made on three occasions during a match, with an additional opportunity at half-time.

“A total of nine substitutes can be named on the team sheet.”

It was also confirmed that the next transfer window will open on 10th June and will close at 23:00 BST on 1st September in line with other European leagues.

Liverpool’s Trent Alexander-Arnold is back in full training and could return from the hamstring injury that caused him to miss England’s recent fixtures. Midfielder Naby Keita also withdrew from international duty with a knee injury and could potentially return.

Watford are boosted by the return of winger Ismaila Sar who has missed the last three games due to a hamstring injury and defender Nicolas Nkoulou is available after completing his recovery from a long-term hamstring issue.