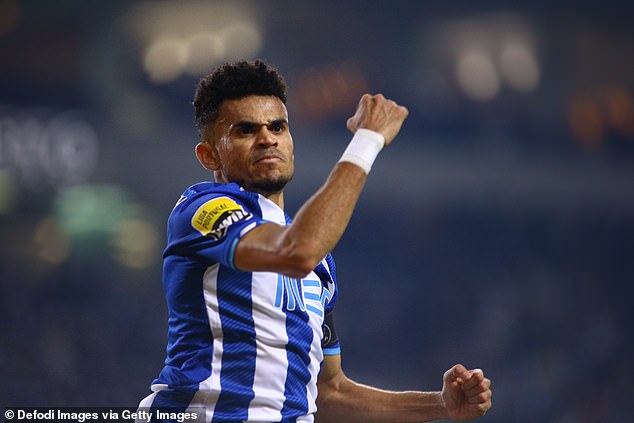 Luis Diaz is subject to a transfer bid of over £37million from Liverpool. The release clause in his Porto contract stood at £67million.

It is difficult to overstate just how mind-boggling these sums of money would have been to the stick thin boy who grew up dirt poor in one of Colombia’s most deprived regions.

As a youngster, Diaz would sit and watch the enormous trains loaded with coal thunder past his home village of Barrancas, carrying their cargo from the pits of Cerrejon bound for the coast and then to Europe.

This football-mad kid was no doubt vaguely aware of clubs with exotic names such as Tottenham, Liverpool, Manchester United, Everton and Newcastle.

Actually playing for one of them, of going over to Europe and the English Premier League, must have seemed like some outlandish dream.

But it is a dream poised to become a reality soon enough with Diaz, currently at Porto, suddenly one of the most in-demand footballers in Europe and linked at various times with all those English clubs.

Tottenham thought they had their man but Liverpool have now hijacked that bid and are closing in on the signing.

His story is quite remarkable. Kids from the La Guajira region, not far from Colombia’s border with Venezuela, where he grew up simply don’t have the opportunity to see the world.

Many children from the indigenous Wayuu people of which Diaz is a member don’t grow up at all. Figures show that between 2008 and 2016, some 4,770 Wayuu children died from malnutrition, left neglected by the Colombian government.

So little wonder when Diaz, then aged 17, was discovered by Colombian legend Carlos Valderrama during trials for the Copa America of Indigenous People in 2015, the main concern was how dangerously underweight he looked.

John ‘Pocillo’ Diaz, who also coached the Colombia team for this tournament, told the BBC: ‘For a moment, we thought it would be very difficult for him to perform because ‘Lucho’ seemed to have malnutrition problems.

‘He was very skinny and lost the duels with other players. But despite that, he managed to stand out among 400 candidates and make the 26-man squad.’

The Copa was held in Chile and the five-hour flight to another country was certainly an eye-opening experience for the teenager, who’d never been abroad.

‘You could see his eyes light up with that experience. Lucho would ask us if he could have the same meal more than once. He was this humble.’

Colombia were beaten 1-0 by Paraguay in the final but Diaz had scored twice during the tournament and there was no heading back to Barrancas forever.

Second division Barranquilla signed him up and immediately put him on a special diet to gain 10kg and so be able to compete against stronger defenders.

Such was Diaz’s promise at 18, the club even created a new age group side to make sure his talents didn’t go to waste.

They loved his humility, magnetic ball control and willingness to try out flicks and tricks – Diaz idolised the Brazilian star Ronaldinho growing up. Fitting into a team dynamic took a little more practice.

His coach at Barranquilla, Fernel Diaz, said: ‘Lucho can shoot from outside the area, he is comfortable with both feet, he can dribble, open defences up and score goals. He can do everything.’

Little wonder Atletico Junior, one of the foremost Colombian teams and also based in Barranquilla, soon snapped him up.

It was there Diaz became a regular in the Colombian top division, scoring 13 league goals in 2018 and enjoying the first of his 31 appearances for the Colombian national team.

His debut, off the bench in a goalless draw with Argentina in New Jersey, was greeted with great excitement in his hometown, where large screens were put up for locals to watch the game together.

It didn’t take much longer for interest from European clubs to come his way.

He turned down Cardiff City in 2018 and then opted for Porto over Zenit St Petersburg the following year, emulating his compatriots James Rodriguez, Radamel Falcao, Fredy Guarin and Jackson Martinez by joining the Portuguese giants.

Carlos Queiroz, who was then Colombia manager and has compared Diaz to Portuguese legend Luis Figo, was influential in persuading him to sign for Porto.

Since arriving, his stock has only risen. Fielded on the left flank in the majority of games and given free licence, Diaz scored 14 times in the 2019-20 season and 11 goals the season after.

But the acceleration in interest from the Premier League in particular has come off the back of his Copa America exploits last summer and a blistering current campaign for Porto.

Colombia finished third at the Copa with Diaz scoring some eye-catching goals, including an acrobatic overhead kick in a 2-1 loss to Brazil during the group stage and a stunning top corner strike in the third-place play-off against Peru.

Further goals against Argentina and Peru saw him share the Golden Boot with Lionel Messi.

In this season’s Champions League group stage, he netted both home and away against AC Milan but Porto didn’t quite do enough to make it through in a tough group also featuring Liverpool and Atletico Madrid.

At 25, Diaz is mature enough to take the next step and Premier League fans will see a tricky customer with the ability to score spectacular goals.

And because of his extraordinary journey, a humble character as well.