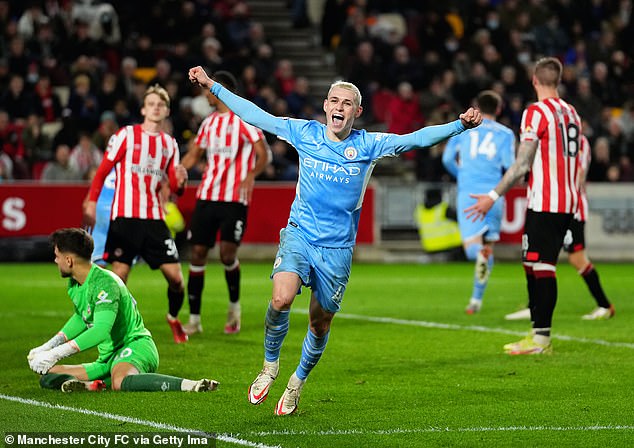 REVEALED: Man City star Phil Foden is valued as the second most expensive player in the WORLD at £127MILLION by CIES boffins… with Real Madrid’s Brazilian sensation Vinicius Jnr taking top spot with a value of £139m

By Nathan Salt For Mailonline

Phil Foden is the second-most expensive player in Europe’s top-five leagues, according to a brand new study.

Analysts at the CIES Football Observatory have used their complex algorithm to estimate the transfer values of 100 players playing in the top divisions in England, France, Germany, Italy and Spain.

Foden, 21, has been ranked at No 2 with a transfer value of £127million, placing him £12m behind the table-topping Real Madrid star, Vinicius Jnr.

The bi-annual list do not factor in release clauses written into a player’s contract other variables, including age, length of contract, level of competition, number of appearances and then goals, assists and clean sheets, for defenders and goalkeepers.

Foden made up one of three England internationals in the top 10 with 20-year-old Manchester United Mason Greenwood coming in at £112m, placing him fourth on the list.

Jude Bellingham, who is impressing in Germany with Borussia Dortmund at the age of just 18, is valued at £109m, putting him sixth overall.

The CIES analysts have Foden’s team-mate at City, Ruben Dias, at eighth overall, with a value of £101m for the 24-year-old centre back.

There is no room in the top 10 for Paris Saint-Germain superstar Kylian Mbappe as he finds himself out of contract in a matter of months.

Mbappe has been given a nominal value of £60m for this month. It is widely expected that were the Frenchman on a long-term deal in Paris he would displace Vinicius Jnr at No 1.

One of Mbappe’s biggest striking rivals Erling Haaland has earned himself a spot on the CIES podium as the Dortmund star is valued at £119m, placing him third overall.

Haaland, 21, is among Europe’s most wanted players and with 19 goals and five assists so far this season he is doing little to damage his lofty reputation.

The Norwegian striker’s Dortmund contract runs until June 2024 but he is widely expected to depart before then with a release clause rumoured to becoming active as early as the end of this season.

It is the Bundesliga that is the most represented in the top 10 valuation list with 18-year-old Bayer Leverkusen midfield Florian Wirtz and Bayern Munich full-back Alphonso Davies coming in at fifth and seventh respectively.

Manchester United reportedly lead the chase for Wirtz, who is turning heads in Germany for his dazzling displays.

Wirtz, who is tied to a deal running to 2026, has been valued at £111m while Canadian international Davies is valued at £102m.

Despite their woes this season both domestically in Spain and in Europe, Barcelona boast two of the top 10.

Outside the top 10 it is a list dominated by the Premier League with seven of the next 10 players currently plying their trade in England.