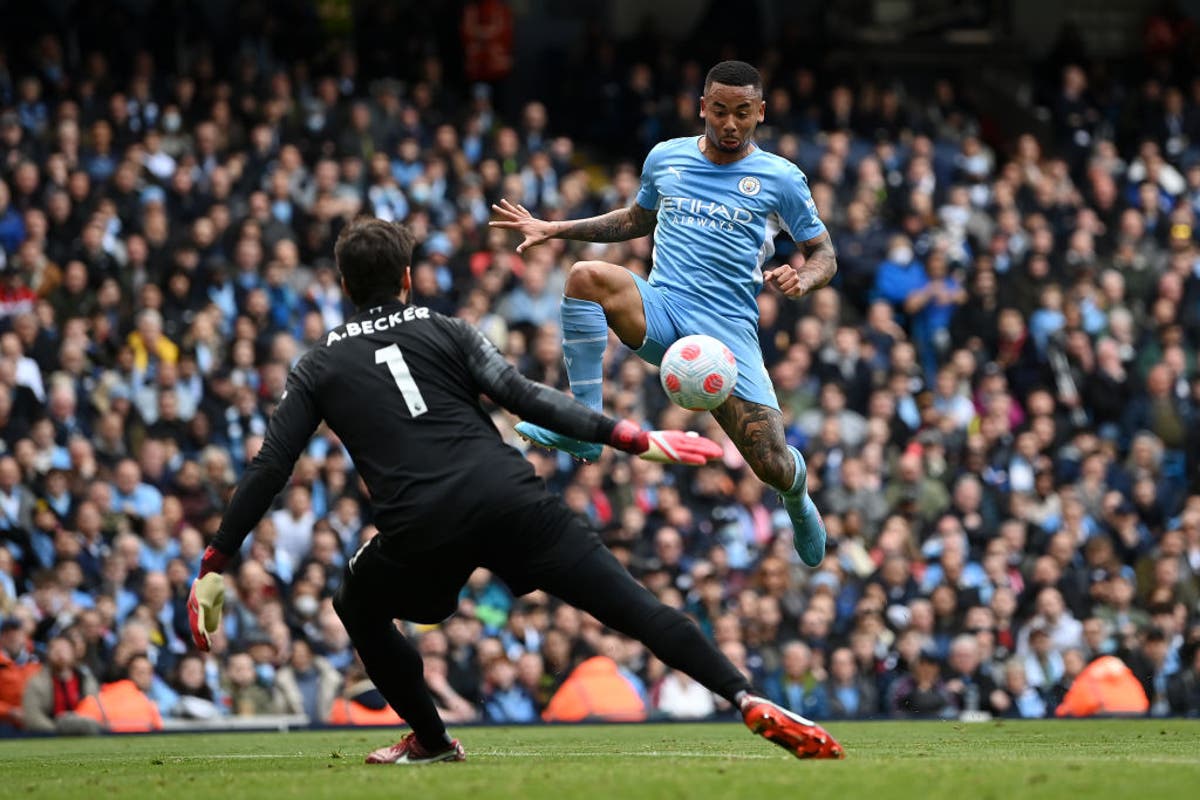 The Premier League title could be decided in today’s contest between Manchester City and Liverpool at the Etihad Stadium as the top two teams go head-to-head. Pep Guardiola’s City were 14 points clear at the top of the table in January but a run of 10 consecutive victories for Jurgen Klopp’s Liverpool has seen them cut that gap to just one point ahead of this afternoon’s clash.

Even though there are seven games to go after today’s showdown, title races between Liverpool and Manchester City are usually decided by the finest of margins – as was the case in the 2018-19 season – and whoever is victorious today will have the edge heading into the final stages of the campaign.

Man City earned a point in the reverse fixture, holding Liverpool to a 2-2 draw at Anfield earlier this season after the Reds twice took the lead, and the teams will also meet again in the semi-finals of the FA Cup next Saturday at Wembley as they chase multiple honours this year heightening the importance of today’s Premier League meeting.

Both sides are also competing for Champions League glory with Manchester City chasing a treble and Liverpool on for a quadruple winning season after also lifting the Carabao Cup back in February.

Follow all the action and updates as Manchester City face Liverpool in this potential Premier League decider:

Goals for both teams in that first half. A deflected effort from Kevin De Bruyne sent Man City in front before Diogo Jota equalised a few minutes later. The status quo remained in tact for the next 25 minutes before Gabriel Jesus snuck in behind and met Joao Cancelo’s cross to put City back in front.

45+2 mins: An extraordinary first half comes to an end with Manchester City taking a slender lead into the break. Pep Guardiola’s men have been the better team. They’ve broken Liverpool down on multiple occasions and could have had even more goals.

Jurgen Klopp needs to change something. Liverpool have had no authority in possession but they look dangerous when they’ve had the ball in City’s final third.

45 mins: Chance! Alexander-Arnold has a little tug at Sterling and gives away a free kick on the left wing. Cancelo swings this one into the box and picks out Laporte who fires a half-volley at Alisson forcing the goalkeeper to push the effort onto the post!

Then the offside flag goes up. Two added minutes to play.

43 mins: Henderson’s through ball sees Diogo Jota into the box and he’s got a couple of options. Either shoot or slide it across to Mo Salah. He does neither and Aymeric Laporte slides across to stop his run and win the ball for the home side.

40 mins: It’s a deserved goal for Manchester City who have created more chances in this first half. When they’ve got in behind Liverpool they could have scored another two goals at least.

Mo Salah’s had a quiet day so far but manages to squeeze the ball into the box for Sadio Mane. He tries to lay it off to a forward pushing Joel Matip but Rodri manages to scoop the ball away.

37 mins: City are back in front! The home side when a corner that Kevin De Bruyne swings into the box. Joel Matip wins the initial ball and heads it out as far as Joao Cancelo. Liverpool try to push the back line up to the edge of the box and play another offside trap but Cancelo has time on the ball and flicks it over to the far side of the penalty area. Matip is a little slow getting forward and Gabriel Jesus keeps himself onside and he bursts into the box. Alisson comes out to grab the ball but it bounces nearer to Jesus who lifts it over the keeper and sends it home off the underside of the crossbar!

33 mins: Chance! Liverpool’s high line is a blessing and a curse. A simple ball over the top sees Joao Cancelo drift in behind Trent Alexander-Arnold and he has enought pace to carry the ball into the box and blast a shot into the side-netting. Most of the time Liverpool’s offside trap works but they look very vulnerable when in doesn’t.

30 mins: Half an hour played and kick off seems like it happened five minutes ago. The game is being played at a blistering tempo.

Liverpool sweep forward down the right wing and play it across to Sadio Mane. He slides it into the box for Andy Robertson’s overlapping run but Kyle Walker gets across to block his ball into the middle of the penalty area.

27 mins: Ederson is calmly living dangerously. He lets a backpass to dribble to within an inch of crossing the line before sliding the ball square to Laporte as Jota slides in to try and intercept.

He’s also pushing way up the pitch so much so that Alexander-Arnold spots him off his line and goes for a spectacular shot from just inside City’s half. He doesn’t catch it well though and the City goalkeeper gets back in time.

24 mins: City win a free kick on the right side that gets flicked over the Liverpool’s high line. Rodri times is run into the box perfectly and nods the ball down but none of his teammates can get to it before it bounces wide of the right-hand post.