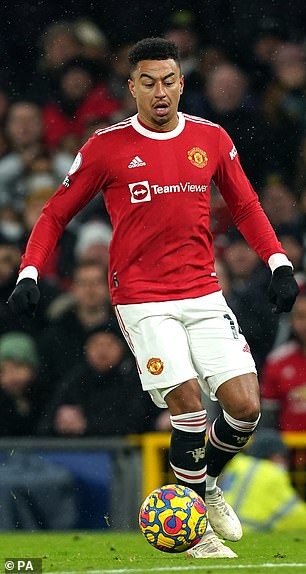 By Isabel Baldwin For Mailonline

Martial joined Sevilla on a six-month loan deal worth £5million in loan fees, after struggling for game time at Old Trafford under both former boss Ole Gunnar Solskjaer and Ralf Rangnick this season.

The Frenchman is hoping to revive his career with the LaLiga challengers, even revealing his is happy to play anywhere at the club, and Berbatov believes it was the right move

‘I’m sad to see Anthony Martial leave United, but in a way I’m happy for him because he needed to go and he needs to play more minutes,’ said Berbatov, via The Metro.

‘Hopefully he will get that with Sevilla and he can show his full arsenal of quality in the Spanish league.’

While interim boss Rangnick is unlikely to make any more additions to his squad before Monday’s deadline, Berbatov believes there should be more departures.

The Bulgarian claimed Lingard and Van de Beek should follow Martial out of the door for the sake of their careers.

He revealed that he was surprised Lingard did not make the move to West Ham in summer as he believes the 29-year-old is not getting the game time he needs at United.

‘I was surprised that he didn’t stay at West Ham and they didn’t find a solution because he did so well there and I don’t know why he’s choosing to stay United if he he’s not going play.

‘If United aren’t going to play him then I don’t understand why there are any problems with him leaving the club.

‘Obviously, when you are from the academy and have spent much of your life at United, it’s difficult to let go and start a new chapter but I don’t think he should be afraid because, as he showed with West Ham, he can do it.

‘He’s still under 30, so he has enough time to to play and enjoy football but just sitting on the bench at United, it’s obvious he isn’t going play, I cannot accept that.’

Berbatov believes it is not working out for Van de Been at Old Trafford and claimed a loan move to Crystal Palace could be an option for the Dutchman.

‘Any move that gives Donny van de Beek the opportunity to play is a good move for him,’ he said.

‘It’s not working out for the Dutchman at United and it doesn’t matter who the manager is, he’s constantly on the bench, and not playing enough minutes to get into shape and form.

‘It’s best for him to follow Anthony Martial and leave to club to go and play elsewhere.

‘He never established himself as a first choice player, which is a shame because he produced great performances for Ajax.

‘He should go on a permanent move and try to get back into the form that he was in before.

‘A loan move to Crystal Palace is an option and if it happens I welcome it because as I said he’s not going to play as a starter at United so he needs to go somewhere where he will be appreciated more.’