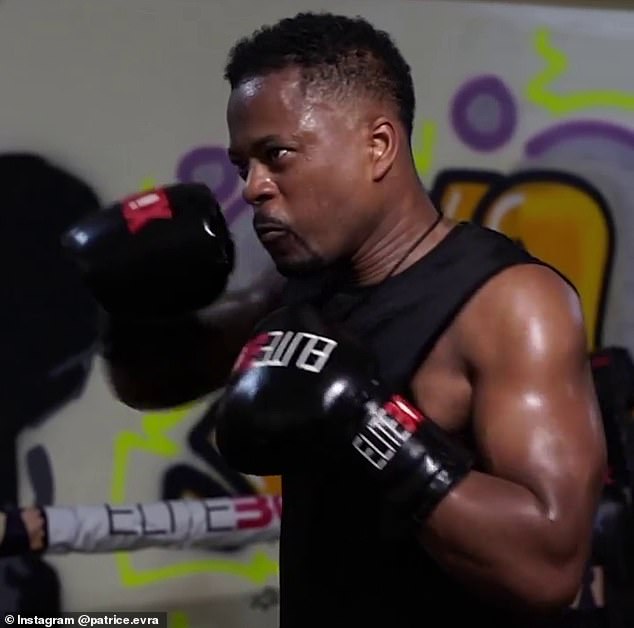 By Sam Mcevoy For Mailonline

The 40-year-old former France left-back – who won five Premier League titles and the Champions League in eight years at Old Trafford – retired from professional football in July 2019 and was set to make his start in a new sport.

He was due to appear on the on the undercard of Martyn Ford’s heavyweight clash against Sajad Gharibi, better known as the Iranian Hulk, but the main event has since collapsed leading to Boxstar to postpone the event until further notice.

Evra has been snapped training with pads before, and was set to compete at a celebrity event

‘Boxstar, are regrettably postponing the planned event on April 30. The announcement comes after the headline fight was cancelled earlier this week.

‘To lose such a big (in every sense of the word) main event has understandably been a blow to the event and to the fans.

‘Due to this, rather than pushing ahead with the April 30, we have instead made the difficult decision to postpone the event. Anyone who has bought tickets for the April 30 show will be entitled to a full refund.’

Ford aired his frustrations on social media after his boxing debut was cancelled, with the Brit pointing the finger at Gharibi for why the fight collapse.

However, Gharibi pointed the blame back at Ford before threatening legal action but Ford now just wants to move on and find a new opponent.

He said during an Instagram video: ‘This is a statement I didn’t want to have to release but my fight is going to be postponed. The event is still going to take place and there is some great people and some great fights on.

‘But unfortunately my fight will not be one of them due to reasons out of my control.

‘It doesn’t take a genius to figure them all out, I don’t want to talk about it, too much time and energy has been wasted. I am still here and I am still training hard, but there will be a debut and there will be a fight. I am just not 100 per cent sure who or when and why?’

Speaking to Boxstar UK earlier this year, Evra said: ‘I’m really excited to participate for the first time ever in my life in a boxing match, because I always had so much respect for people boxing.

‘It is not just about power and strength, it is also about strategy and technique — It’s like a chess game.

During his glittering career on the field, Evra won the Champions League with United in 2008

‘What I am the most excited for is the training technique, because the way they train is completely different to how football players train. I am really excited to work hard, to challenge myself, and to get out of my comfort zone.

‘It is a massive opportunity for me. Of course, I want to have fun, like with everything I do, but I also want to make sure I show that I respect this sport.’

Evra made 379 appearances for United and also represented West Ham, Juventus, Monaco and Marseille, as well as winning 81 senior caps for his country.