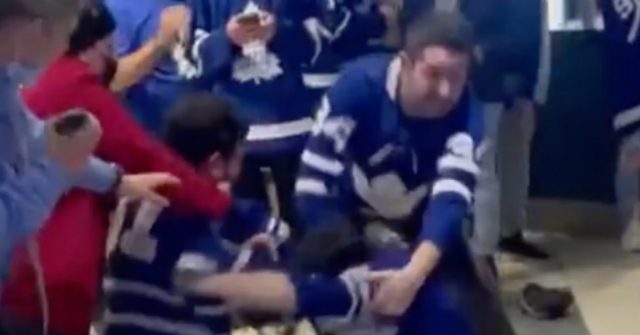 As the Tampa Bay Lightning knocked the Toronto Maple Leafs out of hockey’s Stanley Cup Playoffs, Leafs fans turned on each other to vent their frustrations.

After the Lightning rolled the Leafs 2-1 in Game 7 on Saturday night, Leafs fans didn’t seem to know how to cope with the loss and several fistfights broke out in the stadium.

Video of one of the tussles shows a shirtless fan desperately trying to avoid blows from a fellow fan, though none seem to connect — at least in the video.

But as the first two circle each other, a few other fans started flailing about forcing a police officer to intervene to break it all up.

Leafs fans are turning on each other… pic.twitter.com/rm7RFcNqhE

The loss for the Leafs puts them out of Stanley Cup contention, once again. But it isn’t anything new.  They haven’t won a series since 2004.

As the New York Post added, the Leafs have crumpled for years every time they come anywhere near a series.

“The Maple Leafs have 10 straight losses when facing a chance to close out a series. The list includes blowing a 3-1 series lead on the Canadiens in 2021 but started with memorably blowing a three-goal lead in the final nine minutes of a Game 7 against the Bruins in 2013,” the paper wrote.

Evidently, the fans can feel the frustration.