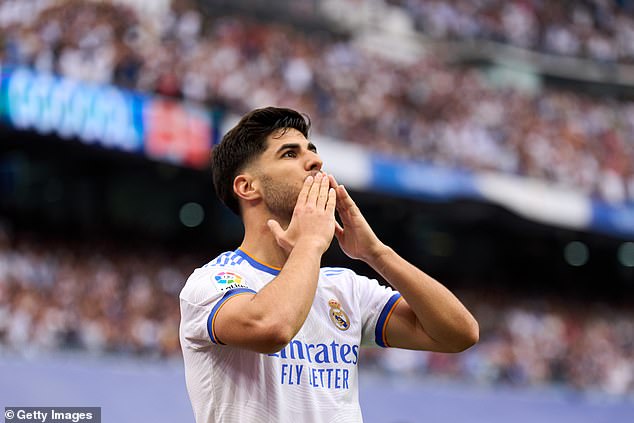 By Julian Bovill For Mailonline

Marco Asensio would reportedly prefer a move to AC Milan over Liverpool as he would be more guaranteed of a starting place with the Italian champions.

The attacking midfielder, who is out of contract next summer at Real Madrid, will likely be available at a cut price this window and is believed to be of considerable interest to various European clubs.

According to Spanish publication Sport, Jurgen Klopp likes the player but Asensio is uncertain of a move to Merseyside owing to concerns over a starting place in Liverpool’s XI.

Sadio Mane has completed a medical ahead of signing a £250,000 per-week deal at Bayern

Liverpool are looking to strengthen their forward options after the departure of Sadio Mane to Bayern Munich.

However, Asensio is said to be fearful of his situation at Real Madrid, where he has been a rare starter, also being the case at Liverpool.

It is that list of players that is said to have convinced the Spain international that a move to AC Milan would be more beneficial for his career.

The Italian champions do not possess the same depth as Liverpool with Asensio likely to be more of a key player in their squad than he would be under Klopp.

However, the might of Premier League clubs’ wealth threatens to bear its teeth again with reports suggesting that AC Milan do not have the financial muscle to match what Liverpool could both in terms of the fee to Real Madrid and wages to Asensio.

Being out of contract next summer, Asensio will be considerably cheaper than he otherwise would be but it is unlikely the Spanish giants will let him go for little.

Meanwhile, his wages are said to amount to around £138,000 per week which could prove a sticking point for AC Milan, Sport claim.

Asensio this month told reporters that there were ‘possibilities’ of a move away from Real Madrid this summer.

‘I have one year left on my contract. Now, I am focused on the national team,’ he said.

‘When this is over, we will talk. We will see what I will do with my future. I think there are possibilities. There is also the option to stay and fulfil my contract year.

‘Rumours are part of football, and more so at Real Madrid. High-level players are always associated with it. It’s something we have to live with.’