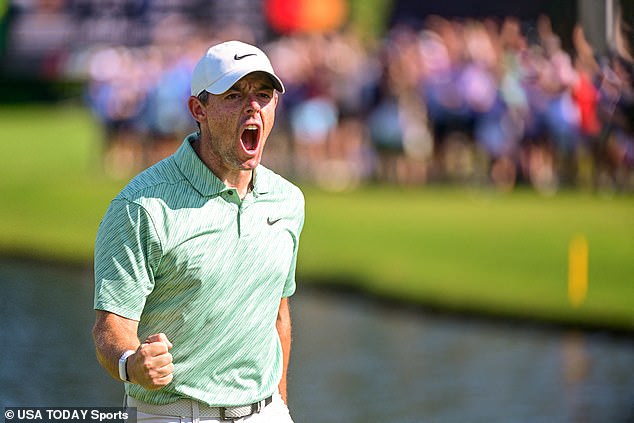 In 2015, Rory McIlroy had tickets for the Floyd Mayweather-Manny Pacquiao fight in Las Vegas. One problem: he also had 18 holes to play against Paul Casey in the WGC Cadillac Match Play tournament, at TPC Harding Park.

No problem. McIlroy was a 24-year-old high roller back then. He had a private plane on standby to fly him from San Francisco to the Nevada desert, and back in time for Sunday’s final if necessary. Problem. The Casey duel overran.

Not only could McIlroy not make it to Vegas in time – Lee Westwood got his tickets – he was also in danger of missing the bell, if he dashed back to his hotel. So McIlroy pulled up a chair in the media tent, pulled out his wallet for pizza and beers for the assembled company, and watched the fight from there. He’s a big boxing fan. Yet he doesn’t have an opinion about the sport selling out to Saudi Arabia.

He’s also a football man. In 2014, he paraded the Claret Jug for his Open win at Old Trafford, home of Manchester United, his favorite club. He admitted that just being out there in a ceremonial role made him feel nervous.

At Ryder Cup events he is invariably seen laughing and joking with former Manchester United manager Sir Alex Ferguson. Yet, equally, no negativity about the threat posed to the established elite by Saudi Arabian investment in Newcastle United.

So it’s just Saudi golf that irks McIlroy. Just the threat posed to his sport by the Saudi-bankrolled LIV Golf breakaway. Next week, he will return to Europe in a field that includes 18 of the new rebel group. ‘If you believe in something, I think you have to speak up, and I believe very strongly about this,’ he said, prior to the BMW PGA Championship at Wentworth.

‘I hate what it’s doing to the game of golf. I hate it. I really do. It’s going to be hard for me to stomach seeing 18 of them there at Wentworth. That just doesn’t sit right with me.’

And some see this as hypocrisy. Why do the golfers get held to higher standards. If Saudi money is tainted – and it is hard to argue it is not, given what is known about human rights and punishment for dissent in the region – then why is it different for golf?

Here’s why. Stand aside from the ethical debate for one moment and consider Saudi Arabia’s relationship to sport.

When Anthony Joshua fought Oleksandr Usyk in Jeddah, boxing was enhanced by such a decider. It helped set up an even bigger match between the victor, Usyk, and Tyson Fury. That may take place in the Gulf, too, and while that is hard on British boxing fans, the sport itself is not harmed. The purses are greater, the investment is superior.

McIlroy, the boxing man, will not think the sport is damaged by Saudi Arabia’s presence. He may not like the regime, but he plays golf in plenty of locations that have a reprehensible attitude to freedom. The argument is always that change takes time, but will happen more quickly as east meets west.

Football the same. The elite have reason to fear Newcastle, as they did Manchester City, but it would hardly be ruinous for the Premier League to have another club pull up its chair at the top table. Certainly Newcastle, a passionate football city, has suffered for too long.

In boxing, Saudi cash has brought major fights such as Oleksandr Usyk vs Anthony Joshua

And in the Premier League, Newcastle becoming a major force can be a positive for soccer

The club last won the league in 1927, a domestic cup in 1955 and their European prize, the 1968-69 Inter-Cities Fairs Cup, is no longer recognized by UEFA. In simply sporting terms, it is hard to begrudge the club or its fans, the chance of success; and a strong Newcastle adds to the sporting spectacle for any football fan, even McIlroy.

Is that true of LIV Golf? Hardly. It has weakened the competition by splitting the fields, it has offered less golf, less jeopardy, even served to rally support for disgraced former president Donald Trump. It is the epitome of cheap and ugly in all but the purses, and when McIlroy says he hates what it has done to the sport, many will recognize that aversion.

Not least because some of LIV Golf’s highest profile driving forces – Greg Norman, Phil Mickelson, Sergio Garcia – seem motivated by a resentment of an establishment and a system that has made them insanely rich. Would McIlroy throw his Vegas tickets Westwood’s way now? That would truly seem the height of hypocrisy if he did.

Cameron Smith, the Open champion, diverted to LIV Golf this week, but as one of the world’s greatest players it is only natural that he would be courted. The machinations to take Europe’s Ryder Cup captain Henrik Stenson were more indicative of a vindictive streak.

Stenson was pushing towards 200 in the Official World Golf Rankings, he wasn’t a huge commercial draw and last won a PGA Tour tournament in 2017 – there was no reason to pay the fortune to lure him, beyond a desire to disrupt the Ryder Cup preparations, which it duly did when he was made to stand down from his role. David Dein, Arsenal’s former vice-chairman, once spoke of Roman Abramovich parking his Chelsea tanks on the Highbury lawn, firing £50 notes.

That is in essence what LIV Golf has done. They have forced the PGA Tour to copy their model of closed shop, no risk, guaranteed pay-out, truncated competitions, pale imitations of what the game should be. McIlroy appears to acknowledge that, even if he is part of the PGA’s new order.

Like Tiger Woods, he appears to share a love for the traditions of the game: not just the majors, but the history, the famous champions, the revered courses that are not exercises in self-aggrandizement.

Of course, nobody would claim golf’s past is peopled only with good guys. David Deas, a 21-year-old Scotsman from Leith received one of the first documented shipments of golf equipment in the American colonies in August 1743. In 1769 he could be found advertising a cargo of Ninety-Four Prime, Healthy Negroes just arrived from Sierra Leone.

The same year, with his brother John, Deas touted Two hundred & Sixty Prime Negroes, directly from Angola, a Cargo of One hundred and Fourteen Healthy Prime Negroes and Forty Remarkably Fine Negro Women: Just Arrived from the Coast of Guiney all in the South Carolina Gazette. Charleston and the surrounding area is regarded as the home of golf in the United States.

It is estimated that during the Atlantic slave trade roughly 260,000 African slaves on 882 ships came through its harbor. When South Carolina became the first southern state to secede from the Union in December 1860, it was home to 400,000 slaves, around 10 per cent of America’s total slave population. Even Kiawah Island, one of the region’s most famous modern courses, was built on plantation land.

McIlory will soon be at Wentworth in England, competing against LIV Golf players

So, no, not perfect. Yet golf is an ancient game with an ancient history. LIV Golf is made possible by investment from a country that murdered journalist Jamal Kashoggi at the embassy in Istanbul in 2018; that this month imprisoned a student for 34 years for merely endorsing dissident statements on social media. Golf cannot change the trade that made the Deas brothers wealthy; but it doesn’t have to sell out to this.

And if it was a simple matter of investment, there could be a debate. After all, President Joe Biden has visited Saudi Arabia, President Emmanuel Macron has entertained the Crown Prince. Sport cannot be held to higher standards than the leaders of the free world.

FIFA’s World Cup has gone to Qatar, its Club World Cup to the United Arab Emirates. The headquarters of the International Cricket Council is in Dubai. The region wants its share of influence.

And maybe if Saudi money gets its way and FIFA makes its World Cup biennial, football will feel the ruinous tide that has washed over golf. Until then, however, the influence on McIlroy’s sport appears exceptionally poisonous. As another LIV event tees off in Boston this week, the Ulsterman’s eyes will narrow further as his beloved golf dissolves into sand.