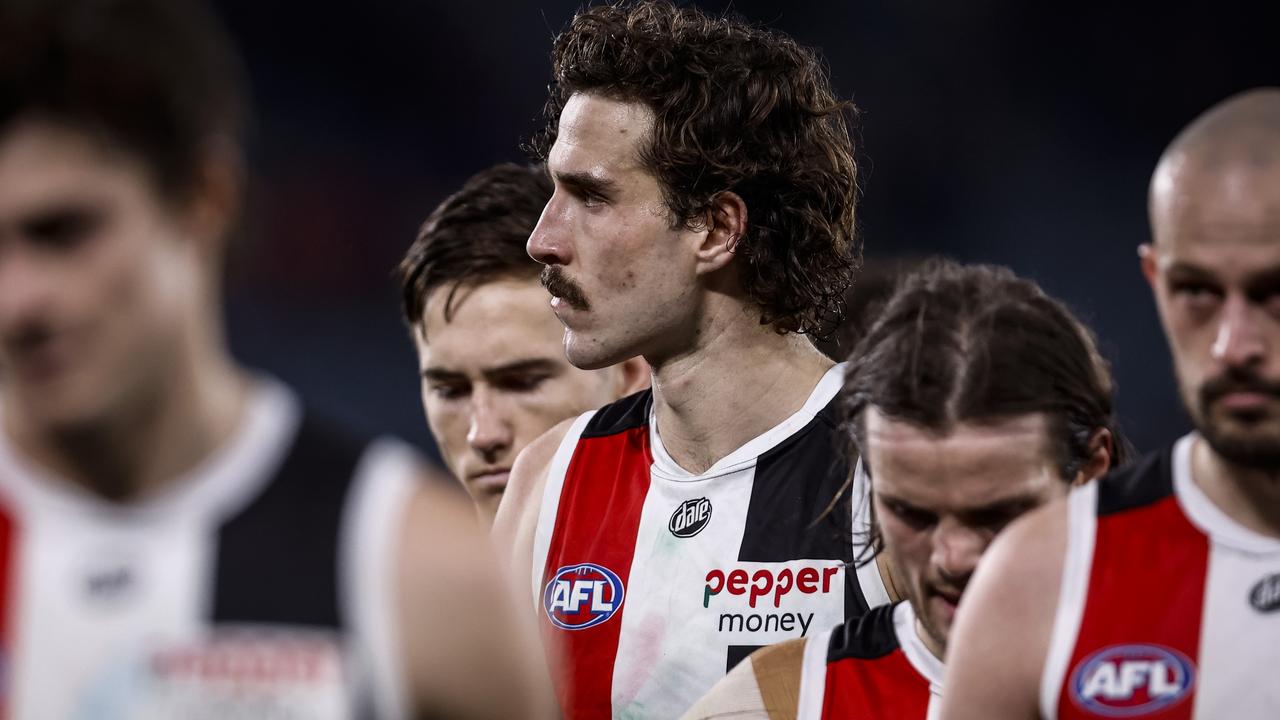 St Kilda coach Brett Ratten has said star forward Max King “won’t be seeing anybody outside the club” to help improve his set-shot routine, instead backing in those at the club to help steady the 22-year-old’s game.

King imposed himself in the air during Friday night’s loss to Brisbane at Marvel Stadium, but kicked five behinds and ended up goalless as the Saints’ finals hopes were all-but dashed.

Speaking post-game, Ratten was staunch in his defence of King.

“It’s part of the game and you look through great forwards to have played the game, they’ve had a night where they haven’t scored like they wanted to,” he said.

“The pleasing part we know about Max is that Tuesday was a day off for the players and he was at Marvel Stadium for an hour-and-a-half having goal-kicking practice. Every day we’re at the footy club or not at the footy club he’s there having extra goal-kicking and really rehearsing and fine-tuning his game to make sure he gets the opportunity to score on game-day. He’s doing a power of work.

“What I do know is I want Max King in my corner. He’ll be at our footy club for 10 years and when we look back we’ll be saying what a great player he is and what he’s done. Tonight he had a night where it didn’t work for him.

“He did everything right but finish, for great forwards that’s happened in the game. He’s 21 years of age, we love what he brings to the footy club, he’s developing and we know that he’s doing the work. Sometimes you don’t get the reward all the time but he’ll keep doing that and you watch, he’ll turn it around.”

King has enjoyed a relatively impressive season in front of goal, booting 47 goals from his 21 games.

Ratten said a myriad of factors were at play for King.

“I wouldn‘t say high pressure, I think sometimes the goal-kicking, it’s got so many elements to it,” he said.

“It’s the technical aspect, the mental aspect, the fatigue, what part of the ground, people score from different parts and score easier when the ball is on the right side versus the left.

“I want to go to war with Max because he delivers and he will deliver.”

The Saints in 2021 knocked back Max King’s request for help from Essendon champion Matthew Lloyd – who also coached King at Haileybury College – instead opting to leave King’s goal-kicking practice to those internally.

Asked on Friday night if there had been a change since then, Ratten’s response was firm.

“He won‘t be seeing anybody outside the club, he doesn’t need to. We’ve got people with the skillset to keep working there,” he said.

“As I said to you, it’s not just all about the technical aspect, there’s a mental aspect to it as well. With goal-kicking, it’s a closed skill and there’s different elements to it.

“It’s not just we bring somebody in and they fix up the hand drop or anything like that. He hasn’t got many flaws, but sometimes it can go against you.”