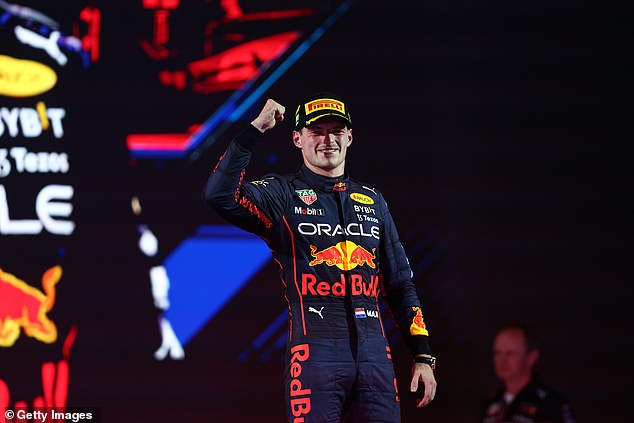 Max Verstappen says he had to use ‘smart tricks’ in his enthralling battle with Ferrari’s Charles Leclerc during the Saudi Arabian Grand Prix.

The Red Bull driver recovered from last week’s disappointment in Bahrain to clinch his first win of the season in Saudi.

He did not have it easy though as he only overtook Leclerc with four laps to go, having battled from fourth position.

As reported by Planetf1, Verstappen admitted getting past ‘was not easy’ and he had to play ‘smart tricks’.

The 24-year-old said: ‘It was a really tough but good race. We were battling hard at the front and we (Red Bull) just tried to play the long game

‘They (Ferrari) were really quick through corners, we were quick on the straight, but the tyres were wearing out quite quick around here.

‘You could see at the end we had a bit more pace, so I just tried to get by. It wasn’t easy, playing smart tricks in the last corner, but eventually I managed to get ahead.’

Both Verstappen and Leclerc benefitted from Sergio Perez’s misfortune earlier in the race.

The Mexican was tricked into pitting by Ferrari before a safety car was brought out following Nicholas Latifi’s crash.

Leclerc took the lead from there and he looked set to fight off Verstappen, who momentarily overtook with the help of DRS.

Verstappen eventually managed to get ahead again with four laps to go and he fought off a late fight from the Monegasque driver.

Leclerc said: ‘It wasn’t enough today, but I really enjoyed that race.

‘It is hard racing but fair. And every race should be like this. I wanted to win today. Max did a great job.

‘I was pushing like I have rarely pushed before, to the absolute limit, but of course there is respect. However, I am disappointed.’

Despite his disappointment, Leclerc remains top of the title race, with Ferrari team mate Carlos Sainz second and Verstappen third.