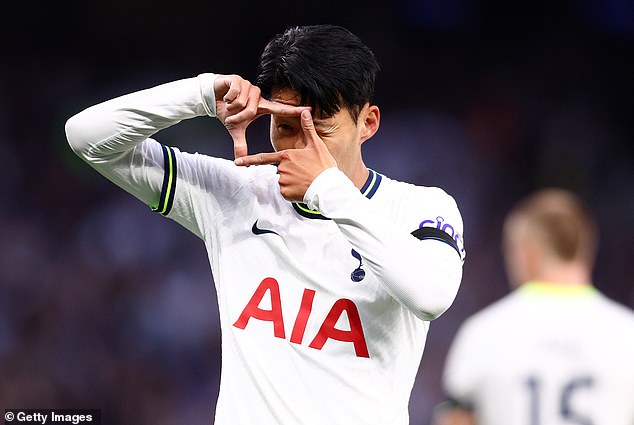 ‘Maybe we can repeat this experiment’: Antonio Conte jokes that Son Heung-min could be benched again… following the Tottenham forward’s devastating 14-minute hat-trick against Leicester

By Henry Tomlinson For Mailonline

Tottenham manager Antonio Conte has joked that Son Heung-min could start on the bench again after the successful ‘experiment’ saw him his score a 14-minute hat-trick against Leicester City.

The South Korean forward was dropped to the bench for the match against the Foxes as he had previously failed to find the next all season, but after coming on as a 59th minute substitute he quickly proved that he still has the quality to be a key player for Spurs this season.

The Italian manager then jokingly suggested that he could stay in the role due to the impact that he made in his post-match press conference.

Conte told Sky Sports: ‘I am really happy for Sonny today, you know what I think of the player. I said to him if you’re going to score three goals in 30 minutes “maybe we can repeat this experiment”, but I was joking.

‘To have a player of Son’s level on the bench means that in one moment I can change the game and also with the rotation at the back today and when Bissouma came on he gave us a lot of strength and energy and I think this is the right path for us.’

The game against Leicester was Tottenham’s last until October due to the international break. Spurs will return to Premier League action in a crucial north-London derby.

Both Spurs and the Gunners have started the season strongly and are competing at the top end of the table alongside Manchester City.

Conte has insisted that for the run of games after the break all the players in his squad are going to be involved on the pitch as it is important to keep the team fresh and prioritise some players for other games.

He added: ‘There are 12 games in a row after the international break and all the players will be involved.

‘If the player is intelligent and a good player and person, it depends on this. Every decision that I am going to take is for the best of the team, always.

‘They have to understand this. Sometimes to start on the bench and to come in is important because in the next game you might be in the starting XI but at the same time you are recharged of the mental and physical energy.

‘I’m lucky, I have a really good group of players, that are really good people. We have to start thinking in a different way if we are going to make the next step.

‘When I decided to bring Bissouma in and play with three midfielders and move Sonny nearer to Kane to exploit the spaces it was really good because it gave us more balance and we exploited the ability of Kane and Son.’