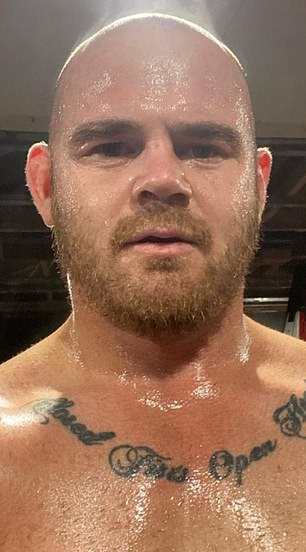 By Ollie Lewis For Mailonline

Next Saturday night, Alexander Volkanovski will be aiming for a 21st consecutive win at UFC 273. If the betting odds are anything to go by, the Australian should see off Chan Sung Jung with relative ease.

But if the Korean Zombie needs any advice as to how to conquer the UFC featherweight king, he need not call the likes of Jose Aldo, Max Holloway or Brian Ortega.

Instead, he should turn to a bloke who now spends his days in a crane in Sydney‘s business district.

Corey ‘Major’ Nelson is the only man to ever defeat Volkanovski, knocking the reigning featherweight champion out with a head kick during a three-round bout in Melbourne back in 2013.

‘Can still see it too,’ Nelson told the Daily Telegraph of his brutal knockout of the now-33-year-old.

‘After that third kick, yeah, Volk was gone. His eyes, they rolled into the back of his head.

‘I remember as he hit the deck, he started to come too as I came in with the hammer fist … which is when the referee stopped it. He wasn’t coming back.’

Volkanovski’s story is well told. The former semi-professional rugby player made the switch to mixed martial arts at the age of 22 and moved down the weight divisions from welterweight to the featherweight ranks.

On this particular night, he was fighting Nelson at welterweight – 25 pounds heavier than the weight category where he now plies his trade.

‘Sharing the cage with him, I saw what everyone else now sees,’ Nelson added. ‘His heart. What that guy has, you can’t teach it.

‘Back then, Alex was on absolutely nobody’s radar. Yet now he’s in the GOAT conversation. To be a little part of his journey, it’s a nice story to tell at the pub.’

However, Corey Nelson (R) knows what it takes to beat Volkanovski. He has also fought, and lost to, Robert Whittaker (L)

As for Nelson, an incident in which his mate picked up the wallet of a drunken attacker saw him hit with a robbery with company charge and dashed his dream of pursuing his MMA dream in the United States, where the UFC were looking to include him in their The Ultimate Fighter competition.

The Major also fought former middleweight champion Robert Whittaker at Luna Park, losing the fight via armbar submission, but he will always have that night where he beat the greatest featherweight on the planet.