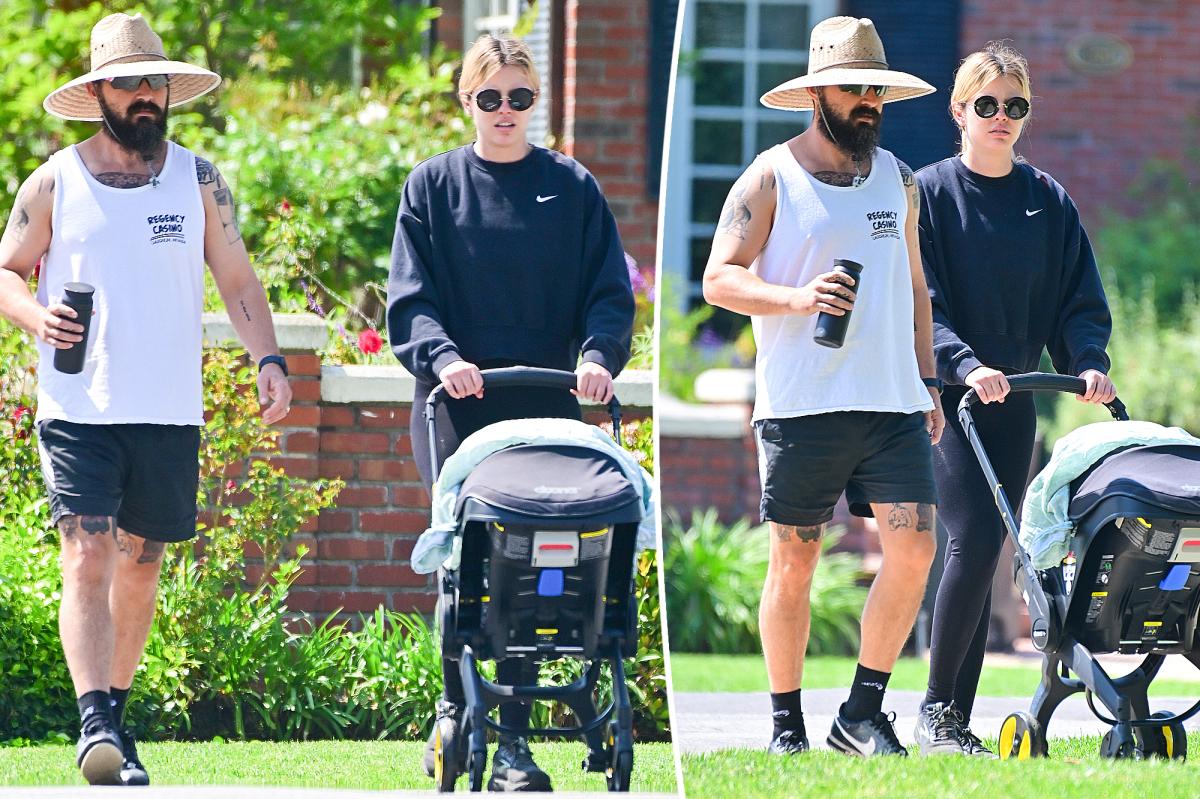 The couple was spotted in Pasadena on Friday taking a walk with their newborn.

Photos show Goth in a Nike sweatshirt and her hair pulled up as she pushes the newborn in a stroller.

Beside her, LaBeouf wore a white tee, shorts and a hat as he sips on a drink.

Goth was spotted out Thursday getting the mail without her baby bump sparking rumors that she’d given birth.

Reps for Goth and LaBeouf did not immediately return Page Six’s request for comment.

Rumors that Goth was pregnant began swirling in November 2021 when she was spotted with a baby bump during a date at Chuck E. Cheese with LaBeouf.

Her pregnancy was confirmed in early February after an obvious baby bump photo of Goth emerged as she was running errands in Pasadena, Calif., the week prior.

Goth, 28, and LaBeouf, 35, have had a rocky dating history since meeting ten years ago on the set of “Nymphomaniac Vol. II.”

The pair tied the knot in Las Vegas in October 2016, but filed for divorce nearly two years later. A rep told Page Six at the time, “Shia and Mia have filed for divorce. The separation is amicable, and all details pertaining to the divorce proceedings will remain private.”

In March 2020, it appeared they rekindled their romance after being spotted wearing wedding rings while riding bikes together.

And then in June 2021, People reported that they were seen together again, this time walking arm-in-arm in Disneyland.

While they were apart, LaBeouf briefly dated FKA Twigs after meeting on the set of his movie “Honey Boy” in 2018. In December 2020, Twigs accused LaBeouf of being abusive and sued him for sexual battery, assault, and infliction of emotional distress.

Twigs claimed in the suit that LaBeouf once threatened to crash the car they were in if she did not profess her love for him. In another alleged incident, she claimed the actor choked her.

LaBeouf — who was also linked to Margaret Qualley at the end of 2020 — initially seemed to take responsibility for his actions and even checked in to a “long-term inpatient treatment” facility. But in court, he denied all of Twigs’ allegations and his attorney claimed that the “Even Stevens” alum’s alleged conduct was “reasonably necessary for his self-defense and/or safety.”

The case is still ongoing.